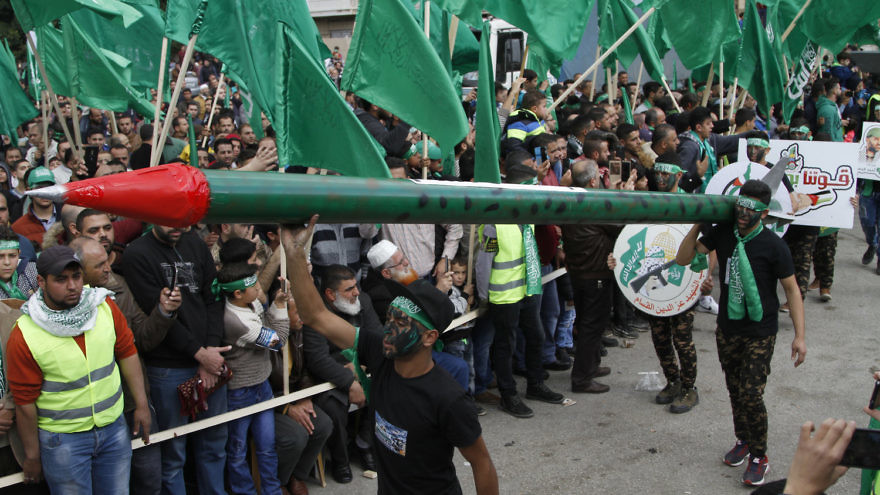 (December 22, 2017 / JNS) Hamas’s latest effort to join a Palestinian unity government is little more than a facade, and the terror group’s top immediate objective is to seize control of Judea and Samaria and turn it into a second Gaza, according to the assessments of defense experts.

After years of failed attempts at reconciliation, Palestinian Authority (PA) President Mahmoud Abbas’s Fatah movement and Hamas in October announced that they would implement a unity deal, which included the restoration of PA control in Gaza by Dec. 1. But the so-called unification quickly ran into trouble, and was delayed to Dec. 10. Now, the reconciliation agreement is apparently collapsing, and Hamas seems to be in no rush to revive it.

“Hamas is just waiting for Abbas to die, or that he agrees to elections, to try and take over the West Bank,” Dr. Ely Karmon, a senior scholar at Israel’s International Institute for Counter-Terrorism (ICT), told JNS regarding the 82-year-old Palestinian leader. “And Hamas is again talking about close ties with Iran and Hezbollah.”

Dr. Col. (res.) Moshe Elad, one of the founders and former heads of the security coordination between the IDF and the PA, said the PA is utterly dependent on Israel’s military presence in Judea and Samaria to prevent a second Hamas-armed Islamist revolution.

Elad, who today lectures at the Western Galilee College, said IDF-PA coordination is “the insurance policy” that the PA has in Judea and Samaria for its survival, since “Hamas is very strong there.”

“Hamas can’t launch a revolution in Judea and Samaria…but it’s a threat that exists all of the time,” Elad told JNS. “It’s true that on the surface, PA President Mahmoud Abbas attacks Israel, but ultimately, he wants us to be there, so that we can give him security against the possibility of a revolution by Hamas. As absurd as it sounds, he understands that Israel’s presence in Judea and Samaria, because of the settlers, holds benefits for him. This means there is a very big convergence of interests…if we leave the area, he will be in a major problem. This is exactly what happened in Gaza.”

Elad was referring to the 2007 Gaza coup, which saw Hamas’s gunmen seize the coastal territory by force and kill Fatah personnel, widening a massive rift between the two Palestinian camps.  The latest stalled reconciliation effort was aimed at bridging this gap. But Elad believes such attempts should not be taken seriously.

According to Elad, Saleh al-Arouri—a senior Hamas operative who is part of a shadow overseas command structure for the terror group that orchestrates attacks from afar—has “sent letters to Hamas operatives in which he ordered them to prepare a similar coup in Judea and Samaria. Abbas knows that the five to six battalions the PA has cannot keep him in power over time on their own. He needs Israel.”

Elad, who has written two books on the Palestinians, said he has counted more than 25 unification attempts between Hamas and the PA since 2007.

“It never succeeds,” he said. “The Egyptians, the Turks, the Qataris and Saudis—who hasn’t tried to mediate? There is a deeper story here than many realize. Hamas will not give up its armed force [in Gaza] so easily.”

On the streets of Palestinian cities, towns and villages in Judea and Samaria, the PA continues to repress Hamas, Elad added.

“In terms of popularity, Hamas is stronger than the PA, because the PA controls by force and authority, and not through public support,” he said. “There are areas outside of the Muqata (the PA’s government complex in Ramallah) where Abbas cannot visit. There are two camps here—a two-headed Palestinian system. Reunification is irrelevant.”

In line with Elad’s assessments, the Shin Bet domestic intelligence agency and IDF ground units in Judea and Samaria continue to operate day and night to keep Hamas in check. Israeli preventative operations represent the majority of the force that is in place against Hamas, with the PA’s own efforts—motivated by self-preservation—forming the minority of anti-Hamas operations.

In recent days, the Shin Bet announced that it had disrupted a Hamas cell in the village of Tel, near Nablus, which was in the planning stages of a kidnapping attack targeting a soldier or a civilian from a bus stop. Three suspects were arrested, who were allegedly in touch with Hamas’s headquarters in Gaza to receive orders and funding for the attack, designed to secure the release of Palestinian security prisoners from Israeli jails.

Both the PA and Israel continue to observe and sometimes disrupt Hamas’s social infrastructure, which spreads its popularity and ideology. These networks include schools, mosques and charity centers, used to keep operatives on the payroll and recruit the masses to the Hamas Islamist cause. University campuses bristle with Hamas student groups that spread radical ideology and promote recruitment drives. Yet the organization’s terrorist cells are routinely detected before they can act.

Dozens of the terror plots are orchestrated by Hamas’s overseas shadow government, led by Arouri, who today is believed to reside in Lebanon—under Hezbollah protection—after leaving Turkey.

Hamas’s goal of conquering Judea and Samaria provides plenty of motivation for the PA to continue its arrest raids on the terror group, prompting Hamas to threaten to end unification talks in recent weeks.

“I do not believe in a real reconciliation between Hamas and Fatah,” said ICT’s Karmon. “They could for a short time coordinate stances on the issue of Jerusalem, but [Hamas political chief in Gaza] Yahya Sinwar has already announced that the agreement has collapsed.”