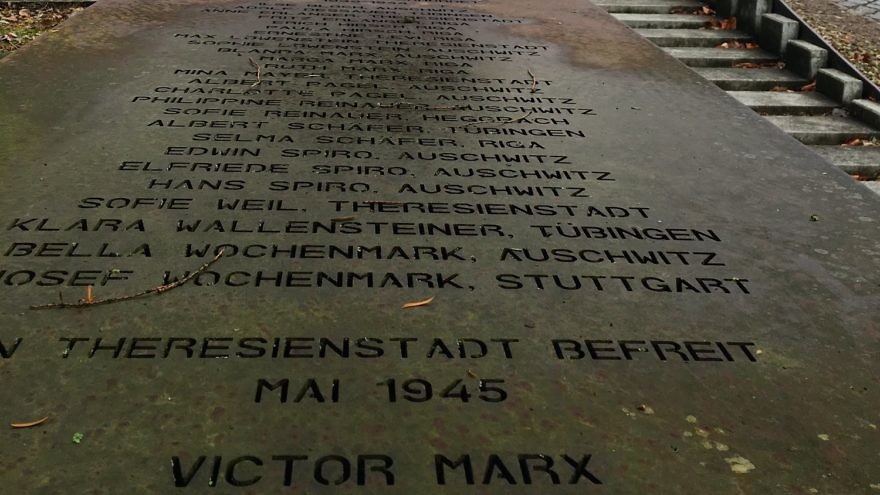 At the “synagogenplatz” (synagogue plaza) in Tübingen, Germany, a memorial to the local synagogue that was destroyed during Kristallnacht. Credit: Orit Arfa.
Republish this article
999 WORDS
Spread the word.
Help JNS grow!
Share now:

Most residents of Tübingen, Germany, probably don’t know that the local “synagogenplatz” (synagogue plaza) even exists. The rusted memorial to the synagogue that burned to the ground during Kristallnacht is one of the few tributes to Jewish life that once existed in the city—not that Jews ever really thrived there.

The source of Tübingen’s growth (its population is 90,000) and fame is its university, founded in 1477 by Eberhard the Bearded, who expelled all Jews from the medieval town. Upon the rise of Hitler, about 100 Jews prayed at the synagogue, which was built in 1882. The names and fate of each are inscribed in metal; most managed to flee in time.

An apartment building has long since taken the place of the synagogue. Just a handful of Jews live in the city today. But on the fourth night of Hanukkah, about two dozen people gathered to light a life-sized hanukkiah in the cold and rain to honor the victims, singing Hebrew hymns as a statement that light will overcome darkness, and that at least in this town, miracles can really happen. 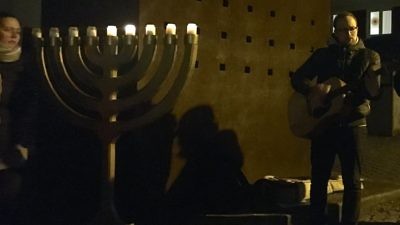 The bearers of these Hanukkah candles aren’t Jewish. In fact, many of them are descendants of avowed Nazis. They are members of TOS Ministries, a church in Tübingen that for the past 10 years has made it a religious mission to redeem the town, the souls of its residents and the Christian faith by connecting Christianity to its Jewish roots, researching personal family history as it relates to the Holocaust and standing up for Israel.

“What was important for us is that that you had the history of the perpetrators, but the other part of history is the massive, passive majority who just stood by and watched and who remained silent, especially in churches, whether it was denominational, state or even free churches,” said Pastor Jobst Bittner, the founder of TOS Ministries, from his office at the church complex.

A portion from railroad tracks nearby, once used to deport Jews, has been set at the church’s entrance—a reminder to “never forget.”

In American terms, TOS is an evangelical church. In Germany, it’s called a “Charismatic church.” What differentiates TOS from its Christian Zionist counterparts is that it operates from a city that was once a Nazi ideological hotbed.

Tübingen University was the first academic institution to proudly declare itself “judenfrei” (free of Jews) under Hitler. Its prestige increased under the Third Reich for its institutes on “racial biology” and the “Jewish question.” TOS estimates that 600,000 Jews were murdered at the hands or orders of SS officers who came from Tübingen.

“What I teach in seminars and what I especially try to get across in churches is that anti-Semitism is nothing that began with Hitler, but is something that was there and hidden for centuries, especially in the church,” Bittner said. “And so every time the churches don’t take an honest look at church history, that prevails, and this hidden form of anti-Semitism is still there, and it usually finds expression in relation to Israel.” 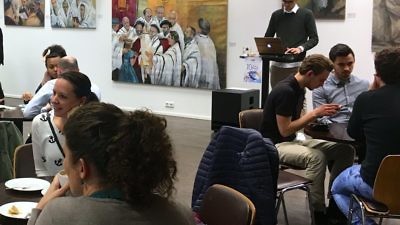 The walls in the lobby of Tübingen’s TOS Ministries are adorned with paintings of rabbis and Jewish children. Credit: Orit Arfa.

In Israel and internationally, the church is best known for the annual “March of Life” program that started in the Tübingen region in 2007 to “reverse” the Nazi “death marches” that saw German soldiers liquidate concentration camps by force-marching emaciated prisoners in the dead of winter to the country’s center, much to the locals’ indifference. Since then, the marches have become meeting points for reconciliation between descendants of Holocaust victims and perpetrators.

Bittner’s theological studies, research and personal worship led him to discover Tübingen’s silence when it came to its dark past. Some streets were still named after Nazi war criminals. Vestiges of Nazi-inspired teachings were still extant in university classrooms. As a sign of progress, the church points to the mayor it elected in 2007—his grandfather was Jewish. City plaques now trace a “Nazi trail” of historical sites relating to National Socialism. And here’s the kicker: Today, the church celebrates Hanukkah.

“At some point we realized, if we think about the Jewish roots of our faith, somehow these festivals and holidays are a part of that,” Bittner said. “It started with Hanukkah. It was kind of the first [Jewish] festival we discovered for ourselves.”

Step into the church’s lobby and you might mistake it for a synagogue. Walls are adorned with paintings of rabbis and Jewish children. “Mazel tov” is written on the bar, where hot drinks are served to the church’s 400 members. The sanctuary feels more like an auditorium, dominated by a statue of a menorah, with its fabric flames whirling alongside flags of the U.S., Israel and Germany.

The Christian “giveaway” is a large wooden cross on the stage, situated behind a wooden pyramid decorated with Christmas ornaments. Oddly, there is no Christmas tree. For TOS, this Christmas icon is pagan at its source, and it was the Maccabean revolt against the “Greek spirit” of paganism that first inspired the church’s “Jewish” renewal. 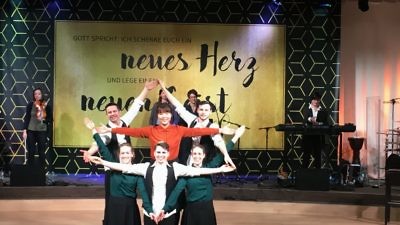 But at the Sunday service, there’s no mistaking its Christian nature, even though the “Be’er Sheva” worship band sings passages from Psalms in perfect Hebrew—alongside rousing gospel music. These services are meant to recall the song-and-dance filled “house churches” that Bittner believes served as “synagogues” for Jesus’s early followers in Jerusalem. Christianity, he teaches, lost this informal and inspirational style when it was adopted by political forces hostile to Jews.

The TOS Hanukkah programming included nightly hanukkiah lightings, each at a different spot of significance for Tübingen’s Jew-hating past; a lecture on contemporary German anti-Semitism held at the university; a class on Yiddish; and a show featuring “The Dreydels,” a Jewish band from the region.

“It’s not that we demand that people observe this holiday,” said Bittner, “but because of the inner working through our history and facing the consequences, this birthed a deep love for Israel in our hearts.”