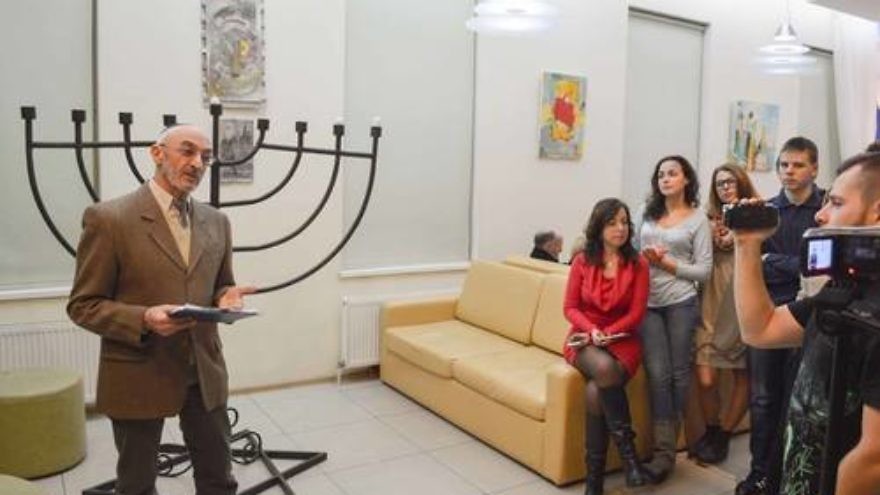 In the United States, there are those who believe Christmas has swallowed Hanukkah whole, reducing it to a sort of Christmas for Jews. But in places like Ukraine, where historic anti-Semitism is not so remote, the holiday still retains some of its original meaning: a parable of Jewish resilience in the face of war and oppression.

So when Ira Sborovskaya sees a huge Hanukkah menorah near the Potemkin Stairs, the iconic entrance to Odessa, once a major Jewish hub, she feels something akin to pride. Sborovskaya didn’t find out she was Jewish until she was 16 or 17 years old, as Soviet control made all religions taboo in her birthplace of Odessa. Now, she’s the point person for one of the world’s largest Jewish charities, the American Jewish Joint Distribution Committee (JDC), in southern Ukraine and neighboring Moldova.

“I thought that if I live in Ukraine, I’m Ukrainian,” she told JNS.org.

Since religious freedom was restored to the region with the Soviet Union’s fall, the JDC has positioned itself in an attempt to help renew Jewish life behind the former Iron Curtain. That mission is now complicated by its related goal of providing for the spiritual and physical needs of Ukrainian Jews displaced from the east.

Odessa has experienced pro-Russian unrest, though it remains safely in Ukrainian hands.

Part of celebrating Hanukkah for people like Sborovskaya is continuing to welcome hundreds of Jews fleeing the armed conflict between the government and Russian-backed separatists in eastern Ukraine.

JDC representatives around the world share information, and so when Jewish families began arriving in Odessa, Sborovskaya was ready for them. JDC is helping organizations on the ground commemorate Hanukkah with celebrations that range from a costume show behind rebel lines in Lugansk to handing out Hanukkah menorahs to internally displaced families in Odessa.

In rebel-held Donetsk, whose bombed-out airport has been a flashpoint in the conflict, the local Jewish community celebrated with a holiday performance in central Shakhtar Plaza, outside the city’s soccer stadium.

Sborovskaya’s daughter is having a very different Jewish childhood from her mother. The 7-year-old, who wears a Magen David around her neck, is leading a Hanukkah dance performance at the Odessa Beit Grand Jewish Community Center.

“It was forbidden here to be religious….When we celebrate Hanukkah so openly, it means we’ve really returned to our tradition,” said Sborovskaya. “And when we see young people, who do it very naturally, it means there is really another [Jewish] generation today in Ukraine.”

Children are a particular focus of efforts to stoke a Jewish revival in Ukraine. In Odessa, JDC partners with Tikva Children’s Home, a center for at-risk children based out of Odessa’s historic Great Choral Synagogue, which held a party featuring a klezmer band on the first night of Hanukkah.

“The miracle of Hanukkah speaks of a small group of people who managed to deal with adversaries from all sides and still win,” Tikva CEO Refael Kruskal wrote JNS.org in an email. “This year, as we celebrate Hanukkah in Odessa in a country at war and financially unstable, the message of the twinkling candles is that, as in the past, we will overcome these hurdles and difficulties.”

The border war, ignited by the same protests that ousted Ukrainian President Viktor Yanukovych for his pro-Russian leanings, has stoked a testy nationalism in Ukraine that already stood at a soft boil. These days, toilet paper sporting Yanukovych’s and Russian President Vladimir Putin’s faces has become a popular souvenir.

It’s a region where mounting nationalism has never been a good sign for Jews, and the violence has been accompanied by a spate of anti-Semitic incidents. It’s not uncommon to see pejorative graffiti like swastikas on the ruins of moldering synagogues.

Less than two years ago, the city’s Jewish leaders mulled evacuating in the face of unrest, going so far as to temporarily shut down the Great Choral Synagogue.

But Odessa’s 35,000 Jews remain, and during the holidays they make an effort to include internally displaced families as they approach their second full year away from their homes, Sborovskaya said.

In eastern Europe, Hanukkah also means increasingly cold weather that can be dangerous for people forced to find impromptu shelter in a foreign city.

Accordingly, the JDC ramped up its winter relief program last year, continuing to distribute boots and heating supplies to families like that of Valeriya Sarabun, a 6-year-old who shares a poorly insulated room with her mother and two other relatives in Odessa.

But Odessa is only one node of a JDC network that operates through 32 local Hesed social welfare centers in Ukraine and partners with organizations such as the International Fellowship of Christians and Jews and The Jewish Federations of North America.

A JDC spokesperson said it cares for 65,000 Jews across Ukraine.

“By providing these celebrations for Jews and Jewish communities in distress, along with the ongoing relief we’re deploying for the crisis, we are enabling those who need it most to find comfort in their Jewish community,” Michal Frank, JDC’s director for the Former Soviet Union, said in an emailed statement.

Meanwhile, internally displaced Jews in Odessa and the community playing their host are hoping for a Hanukkah miracle of Maccabean proportions: a peaceful resolution to the violence in the east.