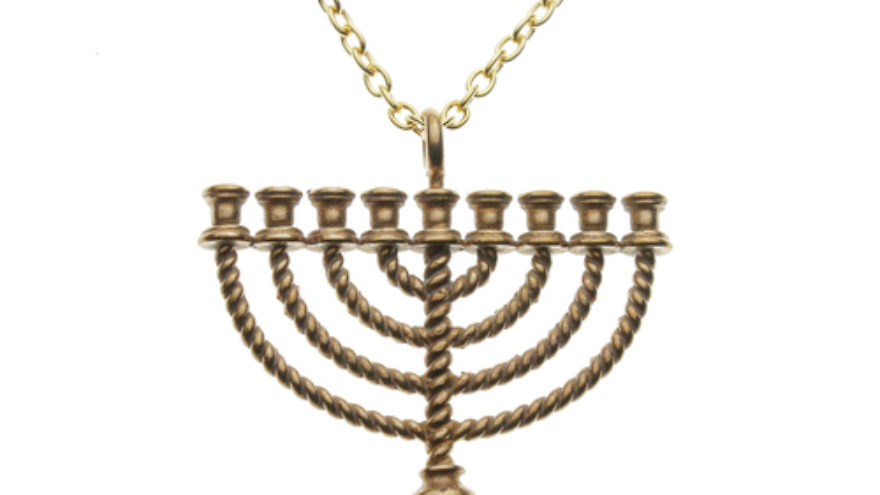 Using the words of the prophets as inspiration, a company called From War to Peace is turning swords into ploughshares—actually, recycled material from nukes into Jewish jewelry—in California.

The line of peace-oriented products that includes flower power earrings, peace symbol pendants, tree of life bracelets, and household accessories is made from recycled copper cabling that once carried the launch codes to Minuteman III nuclear missiles.

The copper, taken from a disarmed and deactivated Intercontinental Ballistic Missile (ICBM) site in Grand Forks, ND, is cast by the company into an array of wearable and usable symbols from many religions, including Star of David earrings, hamsa pendants, and mezuzahs. In time for Hanukkah, a new menorah pendant design will soon be available.

From War to Peace’s work is available in stores nationwide, in Canada, online, and at the Clinton Presidential Library, the U.S. Holocaust Memorial Museum in Washington, D.C., and The Jewish Museum in New York.

“The Jewish prophets are the absolute inspiration for what we do,” said the organization’s founder, Paul Ogren, a former Minnesota state senator who lived in Israel in the 1970s.

The truncated bible verse, “Turn your swords into plowshares, and you shall know war no more,” from both Isaiah and Micah, is featured prominently on the website of the company, which was launched in 2010.

“The cabling is a good source of copper,” said Ogren, who first found out about the metal from a friend who had the scrap contract from the federal government for the silo’s metal and plastic.

Ogren said he bought 10,000 pounds of copper, but initially was not sure what he would do with it.

“I’m always looking for a transformational element,” said Ogren, who recalled that hearing a niece singing a Hebrew song, “Lo Yisa Goy El Goy Cherev,” (“Nation shall not lift up sword against nation”), put him on the path to making jewelry.

“Weapons that kill people can be used for constructive means,” Ogren, a peace activist during the Vietnam War, said.

After discovering that copper needed to be alloyed to be cast successfully as jewelry, Ogren decided on a mixture that included manganese and silicon to create a “Peace Bronze,” which is cast into various shapes in Albuquerque, NM, and Paso Robles, Calif. Various styles are given an iridescent finish in San Luis Obispo, Calif., or dipped in silver or gold in Albuquerque.

One of the mezuzah designs is cast with the words “Peace to all who enter here.” Other styles feature the word “peace” in three languages—Hebrew, English and Arabic—or an image of a dove.

“We do museum grade castings, using the lost wax process” said Ogren, whose company also uses its Peace Bronze in casting the Gandhi Peace Prize as well as the Sean MacBride Peace Prize, awarded by the Geneva-based International Peace Bureau.

Ogren said 24 percent of the company’s profits are dedicated to peace and social justice organizations, with current recipients including Veterans for Peace, Homeboy Industries, and Mothers for Peace.

Seeing a benefit in injecting “humor and lightness” into the messages of his work, Ogren also creates beer bottle openers which say “Beers Not Bombs,” and wine bottle stoppers which say, “Make Wine Not War,” out of the Peace Bronze.

Just how hot is Ogren’s nuke-related jewelry? The cabling was buried six feet underground, has been tested, and is not radioactive.

“I get asked, ‘Will I glow in the dark if I wear your jewelry?’” Ogren said.

“I would have to charge you more,” he said he often responds.