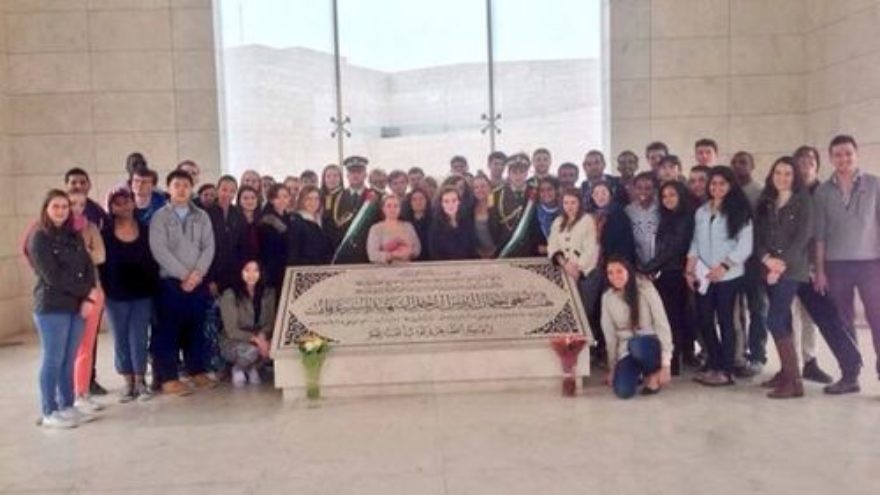 (April 6, 2014 / JNS) The controversy over the Harvard University students who recently posed, smiling, at Yasser Arafat’s grave sent a shot of pain through every one of us who has lost a loved one in the terrorist attacks that Arafat and his allies have waged over the years.

But it must have been particularly awful for Dr. Alan Bauer, a Harvard-educated scientist, to see students from his own school smiling and enjoying their visit to the tombstone of the man responsible for the vicious attack that left Bauer and his 7-year-old son permanently maimed.

Bauer and his son Jonathan were walking on King George Street in downtown Jerusalem on March 21, 2002, when a terrorist from Arafat’s Fatah movement blew himself up. His explosive device was packed with metal spikes and nails, in order to inflict the maximum amount of pain and destruction and the defenseless Israeli civilians walking by. Three passersby were killed, 87 were wounded. Dr. Bauer and Jonathan were hit by multiple metal projectiles. Two of the metal spikes penetrated little Jonathan’s brain.

The attack was in the news for a few days, and then it was out of the public’s sight, and out of the public’s mind. Who today remembers Alan and Jonathan Bauer? Certainly not the 50 or so Harvard students who recently visited Israel and the Palestinian Authority-controlled territories, paid for by Combined Jewish Philanthropies (Boston Jewish’s federation) and Harvard Hillel.

I’m sure Alan, as a Harvard alumnus, would have appreciated a friendly visit to his Jerusalem home and a few words of sympathy from the Harvard students. Apparently the tour organizers never bothered to check on whether there are any Harvard graduates among the terror victims in Israel. But don’t put all the blame on the organizers. These students know how to do a little research on the Internet. In a few minutes, they could have learned about Alan and Jonathan. They didn’t make the time to do that.

But they did make the time to pose, grinning, at the gravesite of the man responsible for that Jerusalem bombing and so many other war crimes against the Jewish people. And they were so proud of the photo that they rushed to share it with the world via social media.

I was disappointed to read an article by three Boston Jewish federation officials, declaring that criticism of the Arafat photo-op is “absurd.” The most they would concede is that some of the trip organizers showed “poor judgment,” but they refused to condemn the students’ action. They shouldn’t be treating the students as if they were babies. They are young adults who either knew what they were doing, or should have.

I was equally disappointed to see that Prof. Deborah Lipstadt, on her Facebook page, wrote this about the Jewish officials’ article defending the Harvard students:  “What a thoughtful article. Lucky is the community with such thoughtful leader who know how to keep their heads screwed on straight.” As a Holocaust scholar, Prof. Lipstadt, of all people, should be able to recognize Arafat was engaged in the attempted genocide of Israel’s Jews. She should have been as outraged by the Arafat visit, as she would have been if the Harvard students had visited Afghanistan and posed at the grave of an Al-Qaeda leader, or if they went to South Africa and had a giggle-and-selfie fest at the grave of an apartheid regime police officer who tortured or murdered black activists.

Last week marked the 12th anniversary of the bombing that maimed the Bauers. This week is the 19th anniversary of the Palestinian bombing attack in which my daughter Alisa was murdered. She was a student at Brandeis University, just a few miles down the road from Harvard. The students at Harvard have shown as little interest in Alisa as they have in Alan or Jonathan Bauer.

Actually, Kelsey, you have not at all acknowledged Arafat’s “lived experience”—you did not write anything about the mass murders and maimings he perpetrated. And you have indeed negated and diminished “another person’s lived experience”—you have negated and diminished the suffering of his victims and their families. Until you understand that, you have learned nothing from your years of learning in the prestigious halls of Harvard.

Stephen M. Flatow is an attorney. His 20-year-old daughter Alisa was murdered in a 1995 bus bombing while she was a student in Israel.