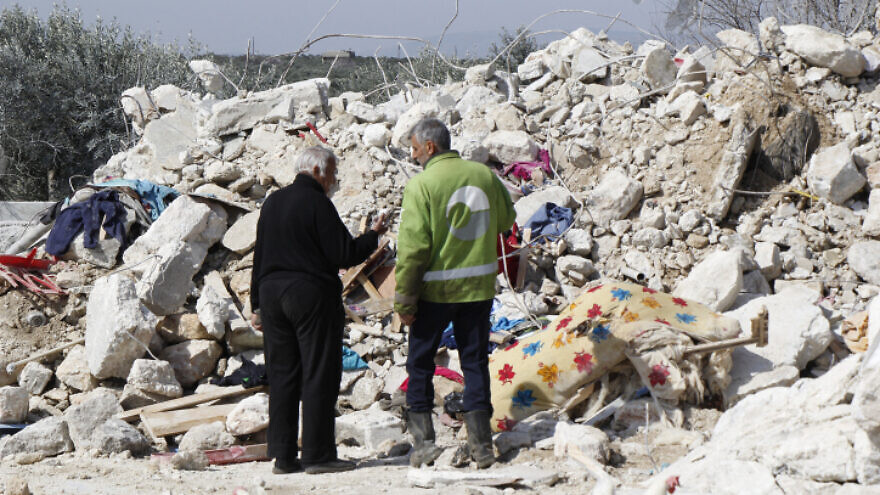 (March 10, 2020 / JNS) Syrian media reports of Israeli airstrikes, allegedly launched early on March 5 in central and southern Syria, may be a sign that Damascus has renewed its chemical-weapons program.

According to Yediot Achronot, one of the targets hit in central Syria is believed to have been a chemical-weapons production facility.

If this is indeed the case, the Syrian regime has gone back to its wicked ways and continues to be active in developing chemical weapons, despite past efforts by the international community to disband Damascus’s program, Professor Eyal Zisser, a lecturer in the Middle East History Department at Tel Aviv University, told JNS on Sunday.

There have been concerns among international observers that Syria has restarted its chemical program. The regime led by Syrian President Bashar Assad has repeatedly used chemical weapons against its own Sunni citizens to conduct mass slaughter throughout the civil war.

Other targets hit in the alleged Israeli strikes appeared to include terror-cell positions in southern Syria, which Iran and Hezbollah were setting up as part of their long-term effort to create strike capabilities against Israel.

Such strikes appear to be a reflection of the fact that the Iranian policy of military and terrorist entrenchment in Syria remains in place, despite likely disapproval from Russia, the senior partner in the pro-Assad coalition, which has its own vision for Syria that does not include Iranian domination.

Under the leadership of the late Iranian Quds Force Commander, Maj. Gen. Qassem Soleimani, the Iranians deployed advanced weapons such as cruise missiles to Syria and attempted to crate precision-guided missile bases throughout the country to threaten Israel with.

Israel has made it clear, through action and word, that it will not tolerate the presence of such weapons in Syria—or in Lebanon—and that it is prepared to take military action to stop its arrival.

After years of fighting in a brutal civil war that has cost the lives of more than half a million people, the Assad regime has regained more than 70 percent of Syrian territory, with the assistance of the Iranian axis and Russian air power. Syria continues to host Iranian forces that view their intervention in the civil war as an opportunity to turn Syria into a military attack platform against Israel.

The new Quds force chief, Maj. Gen. Esmail Ghaani, replaced Soleimani after the U.S. drone strike assassination on Jan. 3 in Baghdad—an attack that replenished American deterrence in the region and caused the Iranians to recalculate their actions regarding attacks on U.S. forces or interests.

Still, it’s too soon to tell how Ghaani’s leadership will affect Iranian actions in Syria, particularly when it comes to Israel.

“Soleimani set up the outline, and this is continuing,” said Zisser. “I don’t think Ghaani has yet had a chance to have his own influence. I assume this [the latest Iranian activities in Syria] is a continuation of what has occurred in the past, and that Ghaani is, in the meantime, continuing without a dramatic, sharp change in the trend. We’ll have to continue to wait for that.”

Growing tensions between Tehran and Ankara

Meanwhile, the shaky truce agreed upon by Turkey and Russia in Syria’s Idlib region, designed to halt combat between Turkish and Assad regime forces, looks uncertain. Almost a million people have been forced out of their homes in the past three months as Damascus and its allies seek to retake the last zone under rebel control in northwest Syria.

The subsequent fighting has seen deadly exchanges of fire between the Turkish military, which is backing some of the rebel groups, and the Assad regime and its allied militias. There are no immediate implications of this fighting for Israel, but the growing tensions between Ankara and Tehran could not be seen as a negative geostrategic development from an Israeli perspective, argued Zisser.

“The fact that the matter was not immediately settled shows the limits of Russia’s power,” he said. “And therefore, this also means that Israel still has a window of opportunity to continue to act in Syria” against Iranian entrenchment.