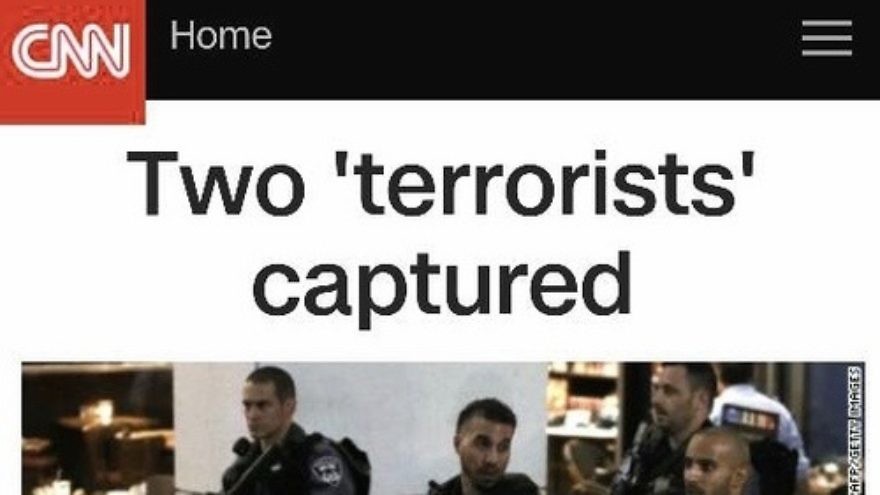 (June 9, 2016 / JNS) After four Israelis were killed Wednesday in a Palestinian terrorist shooting at the Sarona market in Tel Aviv, many international media outlets came under fire for initially reporting misleading information about the attack and in some cases not describing the shooting as terrorism.

While many such news headlines and article texts were later amended, the original phrasing has continued to circulate on social media and on the websites of media watchdog organizations.

In a breaking news update about the attack on Twitter, the American cable news network CNN placed the word “terrorists” in quotation marks, angering Twitter followers who wondered why the news outlet needed qualify its description of an incident that was clearly terrorism. The CNN tweet said, “Two ‘terrorists’ captured after Tel Aviv attack, Israeli police spokesman tweets.” One follower responded by calling on the news network to “take the quote marks off terrorists when that is exactly what they are! It’s not a subjective noun or adjective; civilians murdered.” Another Twitter user said, “Tell your writers that those who open fire in an open market are terrorists.”

A Washington Post headline stated, “4 Killed in Tel Aviv Market Shooting that Officials Labeled Terrorist Attack,” attributing the terrorist nature of the incident only to Israeli officials’ statements, rather than acknowledging the terrorist nature as fact. Yahoo News described the shooting as an “apparent militant attack” in its headline as opposed to a terror attack, taking language from another report by AFP, according to an analysis compiled by the Committee for Accuracy in Middle East Reporting in America (CAMERA).

What some commentators considered the most-jarring headline came from Russia’s state-funded English-language news network Russia Today, which initially reported about the attack with the headline, “2 ‘ultra-Orthodox Jewish’ gunmen kill 3 in central Tel Aviv.”

The headline referred to how the shooters, according to Israeli police, disguised themselves as Orthodox Jews. Although the reporter used single quotation marks around “ultra-Orthodox Jewish,” the headline could have still been interpreted to mean that the perpetrators might have been Jewish.

“The unwillingness of the media to provide clear headlines and, in some cases, forthright information, is a reminder of the power of bias even when events are stark and obvious,” she said.

In the United Kingdom, the British news networks BBC and Sky News both used language in their reporting that ignored clear facts and implied that there is uncertainty as to whether this attack—or others in the wave of Palestinian terror against Israelis that has engulfed Israel since last September—was orchestrated by Palestinians.

The BBC, after already quoting Israeli police and witnesses, initially reported that “it is not clear who carried out the attack. However, there has been a rise in Palestinian attacks against Israelis since last year.” The news network also did not use the word terrorism to describe the attack—except in quotes from Israeli Prime Minister Benjamin Netanyahu, the police, and witnesses, implying that whether or not the attack was terrorism is subjective rather than a fact.

Sky News initially reported in an article about the attack that “since October, 31 Israelis and two Americans have been killed in attacks allegedly carried out by Palestinians,” using the word “allegedly” to imply that the Palestinian identity of the terrorists in all those attacks is debatable, according to the media watchdog HonestReporting.

Also in the U.K., The British newspaper The Metro reported about the attack by focusing not on the wounded and murdered victims, but on Israel’s treatment of the Palestinian terrorists, noted UK Media Watch. “Gun suspect seized after four die,” read the newspaper’s headline alongside an image of a bloodied suspect being wrestled to the ground by Israeli authorities, creating the perception that he was the victim instead of the perpetrator. The Independent, said CAMERA’s Levin, “should get a special prize for most-tortured obfuscation of Palestinian involvement in terrorism. Its story on the Tel Aviv attack managed never to include the word Palestinian or Arab even though it was known from the outset and reported widely that two Arabs were the killers.”

A number of news outlets used headlines focusing heavily on the fact that the attack occurred near the Israeli Defense Ministry headquarters. France’s France 24 network used “Tel Aviv Army HQ” in its headline, implying how the fact that Israel’s defense headquarters were in the vicinity of an attack targeting innocent civilians somehow justifies the actions of the terrorists. The U.K.-based The Telegraph said in its headline, “Four people killed in Tel Aviv shooting near Israeli defense ministry.”

The fact that the two Palestinian gunmen who carried out the attack were wearing suits also confounded the media. Soon after the shooting, a photo of two young men in suits surfaced on news outlets and on social media, alongside claims that they were the terrorists. Almost immediately, however, it was revealed that the men in the photo were actually Israelis and that the photo had been taken last year at the same site.

One of the men shown in the photo, 21-year-old Tal Hadad from the southern Israeli town of Ezer, said he was “stunned.”

“I don’t know what to do,” Hadad said. “This picture was taken a year ago at Sarona. I have no idea how [the media] got a hold of it.”

So what might be the takeaway from the news reporting and headlines on the Tel Aviv terror attack? One Twitter user told CNN after its placement of “terrorists” in quotation marks, “This is the reason why no one trusts ‘news’ anymore.”