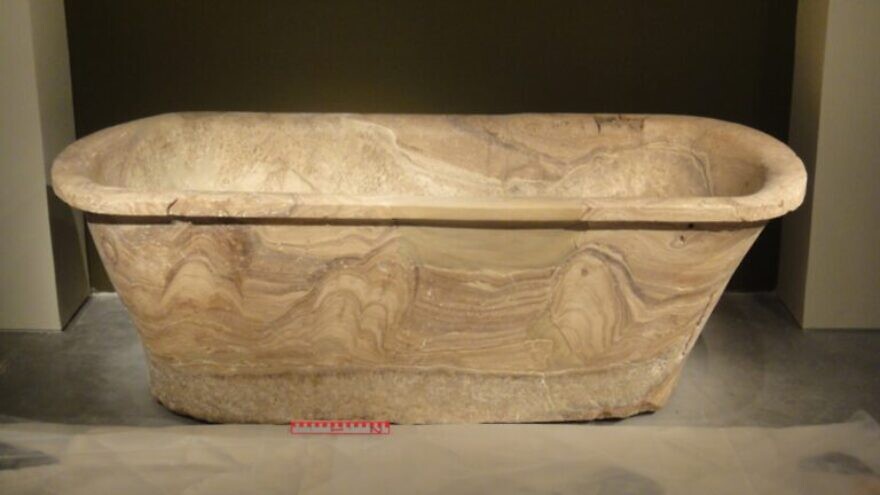 (May 18, 2022 / Israel21c) King Herod the Great had his bathtubs made of alabaster quarried in Israel rather than Egypt, as has always been assumed, according to a research team at Bar-Ilan University.

Two of his lavish, royal bathtubs were discovered over 40 years ago at the Kypros fortress and the palace of Herodium, south of Jerusalem.

Experts always believed they must have been made of alabaster imported from Egypt, as the only alabaster available locally was softer and of a poorer quality—gypsum-alabaster rather than calcite-alabaster.

But a source of calcite-alabaster has been discovered near modern-day Beit Shemesh, at the Te’omim cave, on the western slopes of the Jerusalem hills.

The Bar-Ilan team used four analytic methods to compare the Israeli alabaster with samples from Egypt.

And their unequivocal conclusion, published in the Nature journal Scientific Reports, is that Herod the Great’s alabaster bathtubs were quarried in Israel.

The team was surprised to find that locally produced alabaster was available, and that it met Herod’s exacting standards. He was known as the greatest builder in the Holy Land—the driving force behind palaces, fortresses, amphitheaters, the city of Caesarea and the Second Temple in Jerusalem.

“The fact that both bathtubs were unequivocally quarried in Israel and not in Egypt, as we would have expected due to the high quality of the stone, was a particular surprise,” said BIU archeologist professor Aren Maeir.

“It means that Herod the Great used local produce, and that the calcite-alabaster industry in Judea in the second half of the first century [B.C.E.] was sufficiently developed and of high enough quality to serve the luxurious standards of Herod, one of the finest builders among the kings of that period.”

Alabaster from Egypt was widely used to make vessels, carvings and ornaments at the time. If Herod’s bathtubs were made of locally-sourced alabaster, it’s possible other artifacts assumed to be Egyptian were actually made of alabaster from Israel, researchers believe.

The team compared Egyptian and Israeli mineral samples, applying techniques never before used in such circumstances. Traditional archaeological methods and petrographic analysis, the main method used to determine the source of Israeli calcite-alabaster, were not sufficiently rigorous, they said.

The absence of ancient calcite-alabaster quarries in the Southern Levant had always led to the assumption that all calcite-alabaster vessels found in the Levant originated from Egypt, while poorer quality vessels, made of gypsum-alabaster were local products.

Herod became known as “Great” for his ruthless leadership and his Massacre of Innocents—a deliberate attempt to kill the infant Jesus, according to Christian tradition.