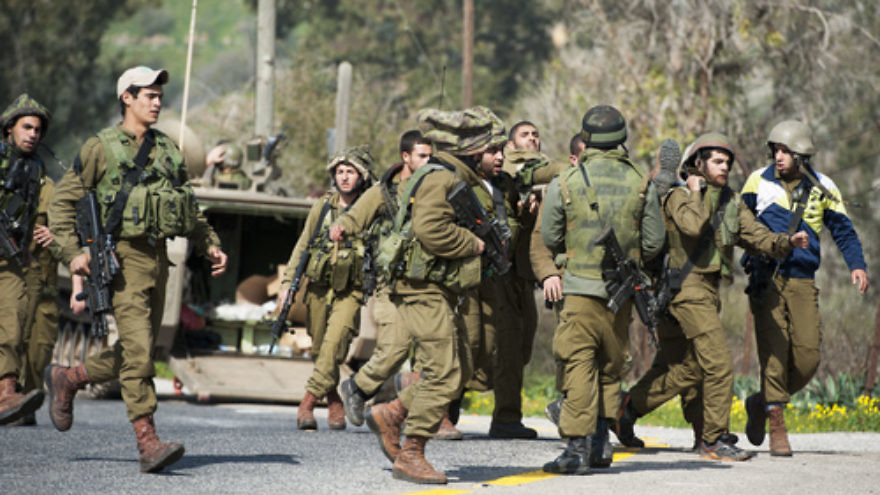 (January 30, 2015 / JNS) Who was behind the Jan. 28 attack on northern Israel that killed two Israeli soldiers and wounded seven others? The easy answer would be the Lebanon-based terrorist group Hezbollah, which claimed responsibility for the attack. But the wider view suggests Hezbollah’s state sponsor: Iran.

Dr. Ely Karmon, a senior research scholar at Israel’s International Institute for Counter-Terrorism, said that Hezbollah’s actions represent “an attempt to change the strategic rules of the game.” According to Karmon, Iran and Hezbollah have been working for months to take advantage of instability in Syria in order to create a forward military position against Israel in Syria’s Quneitra region, close to the triple Syria-Lebanon-Israel border.

“This is actually an Iranian project,” Karmon told JNS.org. “They have around 1,500 people on the ground in Syria, most of whom are counseling or training Syrian militias, and they have Hezbollah providing military support.”

In response to the Jan. 28 attack, Israeli Prime Minister Benjamin Netanyahu said that “whoever is behind today’s attack will pay the full price.” Netanyahu—like Karmon—stressed that the attack points back to Iran, adding that “with the assistance of Hezbollah, Iran has been for some time trying to open another front against Israel on the Golan Heights. We are acting with force and determination against these attempts.”

“Because of the weakness of the Syrian regime, the Iranians are now permitted to have a foothold directly on Israel’s border, which until now they didn’t have,” Karmon told JNS.org.

Israel is widely believed to be responsible for a Jan. 18 airstrike against that foothold in southern Syria, which killed six Hezbollah operatives and six Iranians, including notorious Hezbollah commander Jihad Mughniyeh and Iranian general Mohammad Ali Allahdadi.

Karmon believes the airstrike “was a message sent by Israel” to forewarn Iran and Hezbollah not to continue their military efforts in Syrian territory.

The retaliatory attacks by Hezbollah following the deadly airstrike were widely expected. That the more sophisticated Kornet anti-tank missiles were fired from Lebanon and not Syria provides a strong indication that the Syrian position is not as well-stocked with weaponry as southern Lebanon—a zone that was supposed remain completely demilitarized under U.N. Security Council Resolution 1701 which arranged for the cessation of hostilities following the Second Lebanon War of 2006.

“Resolution 1701 calls for complete disarmament in Southern Lebanon, and yet Hezbollah, instead of disarming, they have amassed some 80,000-90,000 missiles,” Karmon said.

“Now they want to achieve the same equation in southern Syria. If Israel does not stop them, and there are two to three years with relative quiet, with only occasional penetrations of our border and sometimes mortar fire and so on, a kind of ‘war of attrition,’ then all of a sudden we will find ourselves staring at 5,000-10,000 missiles,” he said.

According to Karmon, Israel’s enemies were making progress in their strategic advances in Syria. He suggested that the Israeli airstrike was an “attack against the Iranian and Hezbollah command delegation to this area, which was preparing the implementation of this project.”

In a statement, Hezbollah called Wednesday’s attack into Israel a “first announcement” carried out by the “fallen martyrs of the Quneitra brigade,” an indication that Hezbollah may have additional retaliatory measures in store. But these retaliations may not necessarily come in the form of another direct attack on Israeli soil, which would likely bait Israel into yet another round of strikes and potentially kickstart a wider military conflict.

Karmon believes that Israel “can decide that from its point of view that this round of the conflict is finished.” Yet Hezbollah’s statement lends itself to additional rounds of rocket fire or other acts of terror.

“I think there is a high probability that Hezbollah will try an operation abroad,” Karmon said.

Over the past three to four years, Hezbollah has made several attempts to attack Israel-related targets. Hezbollah is widely believed to be responsible for the July 2012 bombing at Burgas Airport in Bulgaria, which targeted a bus carrying 42 Israelis who had just arrived on a flight from Tel Aviv. The bus driver and five Israelis were killed, and 32 Israelis were injured.

In October 2014, a suspected Hezbollah operative was arrested in Lima, Peru. Karmon noted that according to media reports, Peruvian law enforcement likely received intelligence from Israel’s Mossad, indicating that Hezbollah sought to target Israelis and Jews in Peru—including the Israeli Embassy in Lima—and other Jewish community institutions.

Yet even with the threats to the Israeli home front and Israeli-related targets abroad, Karmon contends that Hezbollah is likely not trying to bait Israel into an all-out war.

“Iran and Hezbollah know that if Israel entered to into a major military attack on the Syrian border, [Syrian President] Bashar Assad will fall. Clearly, they need Assad to stay in power,” Karmon said.

“In Lebanon, Hezbollah knows that if Israel launches a full-scale operation, all the Christians and Sunnis, and even most of the Shi’a Muslims will fight against [Hezbollah], so they have to play brinksmanship—on the one hand to advance their plan to take control of this territory, and on the other hand hoping that Israel will not dare to stop them,” he added.

Whether or not there is an all-out war between Israel and Hezbollah “depends very much on the decision of the Israeli government, not just today, but in the near future,” explained Karmon.

“At the moment it seems that Hezbollah is presenting the attack on the IDF position as their response to the airstrike in Syria,” he said. “Now we are equal. But again, if Israel would decide not to permit Hezbollah and Iran to have this new strategic military position in Syria, I think there is a possibility of more attacks, but not leading to a full war.”