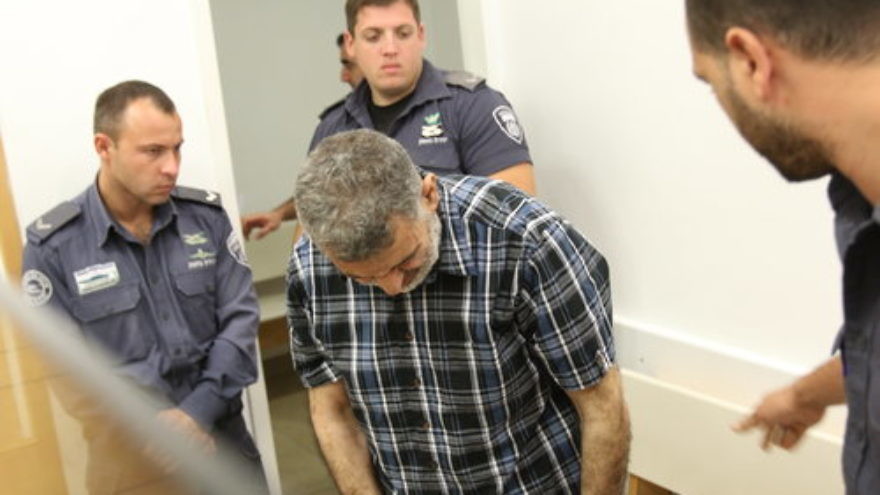 In August 2015, Swedish-Lebanese national Hassan Khalil Hizran (center)—at the time accused, and later convicted of being recruited by the Hezbollah terrorist group to enlist Israeli-Arab operatives with access to soldiers, members of the security services and government officials—is pictured at the District Court in Lod, Israel. Credit: Flash90.
Republish this article
913 WORDS
Spread the word.
Help JNS grow!
Share now:

(March 17, 2017 / JNS) These days, Hezbollah is usually associated with its vast arsenal of rockets pointed at Israel, or its heavy involvement in the Syrian Civil War. But the Lebanese Shi’a terrorist organization has also, in recent years, been involved in efforts to strike Israel in a very different manner.

Hezbollah has been hard at work attempting to systematically recruit Palestinian and Israeli-Arab operatives to commit atrocities, often using the internet to seek out and tempt new members from the West Bank and the Gaza Strip, and from inside Israel.

The goal of Hezbollah is to orchestrate devastating, lethal acts of terrorism, but to cover up any trails that might lead back to the group, thereby inflicting painful blows on Israel without having to face the consequences. To date, the Israel Defense Forces (IDF) and the Shin Bet domestic intelligence agency have successfully thwarted such efforts, and many Israeli lives have been saved as a result.

Most recently, Israeli security forces this month announced the arrest of Yusef Yasser Sweilam, a Palestinian resident of the West Bank city of Kalkilya, who was suspected of being a Hezbollah operative. On the Israeli-Arab front, prosecutors in October charged six residents of the village of Khadr, located on Israel’s border with Lebanon, with attempting to plant bombs in the Haifa area on behalf of Hezbollah.

Yoram Schweitzer, head of the Program on Terrorism and Low Intensity Conflict at the Institute for National Security Studies (INSS) in Tel Aviv, said that Hezbollah’s recruitment of Israeli Arabs “is not a new phenomenon.”

“It is a continuation of durable efforts by Hezbollah to take advantage of Arab Israelis…both as collectors of intelligence for Hezbollah purposes, as facilitators and from time to time, also as perpetrators [of terror attacks],” Schweitzer told JNS.org.

To pursue its plans, Hezbollah fans the flames of violence, incites and financially tempts recruits into committing heinous attacks. A common recruitment method involves setting up Facebook profiles that feature pro-Palestinian content, and making them accessible to the Hezbollah’s target audience.

Hezbollah follows up with private-message chats in which would-be recruits are tempted with financial incentives, and then ultimately, they receive an official offer to join the terror group.

The next stage involves the transmission of a series of instructions that include steps to carry out shootings and suicide bombing attacks against Israeli targets. This is often accompanied by encouragement to recruit additional members, to form a cell that Hezbollah can control from afar.

The most recent manifestation of this threat was the alleged plan of Sweilam, the arrested Palestinian from Kalkilya, who received instructions from Hezbollah on how to conduct attacks—including a kidnapping, according to the Shin Bet.

Sweilam, a welder by profession, was allegedly recruited to Hezbollah through a Facebook profile used by the Lebanese organization to attract new members from the Palestinian population.

According to a Shin Bet investigation, at a certain stage Sweilam was instructed to open an email account, where he received an encryption program through which he began receiving messages from his Hezbollah handler, known as “Abu Hassin.”

At that point, Abu Hassin sent the operative missions to carry out. Sweilam was allegedly ordered to photograph and gather data on IDF bases and checkpoints, as well as on sites in Jerusalem’s Old City. Hezbollah even ordered him to set up a terrorist cell for the purpose of kidnapping an Israeli and moving him to Lebanon.

The Shin Bet arrested Sweilam before any of these plots could be realized, and in recent days, he was charged with a series of severe security offenses at the Samaria Military Court.

The Sweilam episode is just the tip of the iceberg. In 2016, Hezbollah attempted to set up multiple terror cells, all of which were stopped by Israeli security forces before they could carry out attacks.

The thwarted operations included a Hezbollah-organized terror cell in Kalkilya that was supposed to perpetrate shooting attacks against IDF patrols, and had reached the stage of conducting firearms and explosives training. A Hezbollah operative from the northern West Bank, meanwhile, was instructed to recruit other terrorists and to carry out a suicide bombing attack aboard an Israeli bus.

Also last year, Hezbollah recruited a member in the Jenin Refugee Camp, and sent him instructions on how to form a terror cell, purchase M-16 assault rifles and target IDF forces in his area. A second Jenin operative received instructions for conducting attacks, and had agreed to recruit others. He also received information on how to assemble bombs.

Hezbollah has set up a branch dedicated to recruiting terrorist operatives to harm Israel, and the branch itself contains “special units” that activate Israeli-Arab recruits, explained Schweitzer, the terrorism expert from INSS.

Some Arabs might be “recruited abroad while studying, for example,” Schweitzer said, and can be activated for terror missions when they visit home or return permanently to their residences in Israel.

One of the most-high profile cases of this nature involved Azmi Bishra, the former leader of the Arab political party Balad in the Knesset legislature. Bishara fled Israel in 2007 after coming under suspicion of being a Hezbollah agent.

In the months and years ahead, as Hezbollah continues its efforts to recruit Palestinian and Israeli-Arab operatives, Israel’s security forces can be expected to remain on high alert for this threat—which if left unchecked, would result in a series of deadly attacks in Israeli cities.