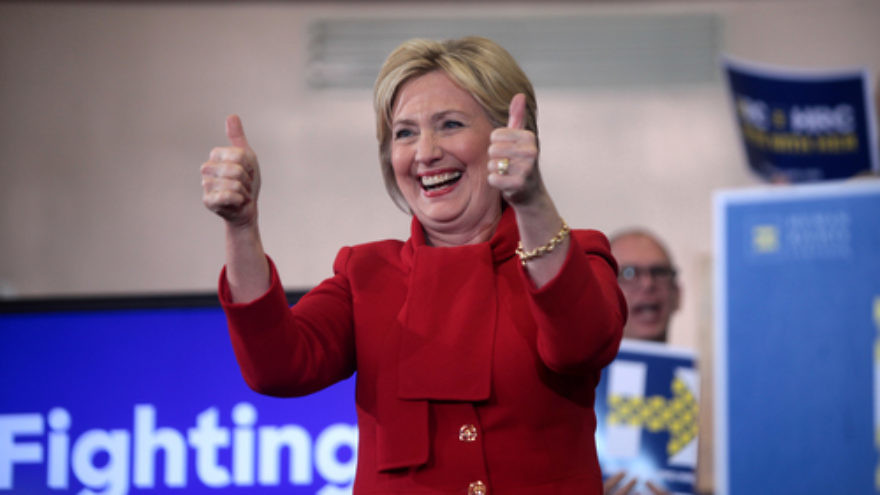 I didn’t grow up celebrating Pesach. But over the years, I’ve attended seders where I was inspired by the remarkable story told in the haggadah—a tale of a people who, sustained by fortitude and faith, escaped slavery and reached their freedom.

As Jewish people around the world prepare for this festival, I wanted to offer a few of my own thoughts on ancient lessons that still hold wisdom for today’s world.

The first is the importance of religious freedom. The Book of Exodus recalls how the Pharaoh denied the Israelites the right to worship as they chose. Today, there are new threats to religious liberty and an alarming rise in anti-Semitism. In many parts of Europe, we’ve seen synagogues vandalized and gravesites desecrated. International efforts to malign and isolate the Jewish people—like the alarming “BDS” movement—are gaining steam.

We must confront these forces of intolerance. As New York’s U.S. senator, I sponsored laws to support restitution for victims of the Holocaust. And I joined with the Helsinki Commission to help protect and preserve Jewish cemeteries in Eastern Europe. As secretary of state, I stood up for oppressed religious minorities in China, Iran, and around the world. If I’m fortunate enough to be elected president, I would ensure that America continues to call out and stand up to anti-Semitism. And just as Jews have always stood up for other communities, we must push back on the rising trend of anti-religious sentiment in any form.

The second lesson is the importance of caring for one another. After a hasty departure from Egypt, as the Israelites wandered for forty long years in the Sinai, they developed a covenant with G-d and each other, so that no one in future generations would be left out or left behind.

I believe that same sort of social contract exists in America. We must fight any effort to weaken or privatize Medicare and Social Security, and we must finally expand benefits for widows. We must improve housing for low-income families; at their best, public and affordable housing gives families a chance to get back on their feet, afford other essentials, and give their kids a safe and healthy place to grow up. We should provide $25 billion to build more affordable housing, and up to $10,000 in down payment assistance for families looking to buy their first home.

The third and most important lesson comes at the end of the five books of the Torah, when the Jewish people are set to arrive to their own homeland, so that they would never again be subjugated. (They ultimately arrive in the Book of Joshua). I’ve proudly stood with the State of Israel for my entire career, making sure it always has the resources it needs to maintain its qualitative military edge. I also worked to ensure funding for the Iron Dome missile defense system and saw its effectiveness first-hand when I worked with Prime Minister Benjamin Netanyahu to negotiate a cease-fire in Gaza. Since its installation, this technology has saved countless lives.

Protecting allies and partners like Israel is one of the most solemn duties of any commander-in-chief. Yet others in this race suggest we must remain “neutral” in order to negotiate. But Israel’s safety is simply non-negotiable. And it would be a grave mistake for the United States to cede the mantle of leadership in the peace process to anyone else. For the security of Israel and the world, we need America to remain a respected global leader, and be ready and able to block any international effort to isolate or attack Israel.

There’s one final lesson in the story of the Exodus: the reminder to keep telling its story. To connect the past with the present, participants in every seder are taught to imagine that they themselves were still enslaved in Egypt.

In today’s world, many don’t have to imagine. Every year, more than 20 million people are trafficked or sold into slavery by modern-day despots and Pharaohs. In my travels as secretary of state, I met many who have escaped the contemporary forms of enslavement that continue to plague our planet. And I believe that our shared traditions—Jewish and American—give us a moral obligation to bring help and hope to those in need.

At a trafficking shelter in Kolkata, India, I met remarkable women and girls who had suffered horrible abuses and were getting their lives back on track. I’ll never forget meeting one young girl who was born into slavery in a brothel, but managed to escape with her mother. It would never be easy, but with the help of others, they were finally out of harm’s way and able to reach for their G-d-given potential.

This Pesach, let’s continue fighting all forms of oppression, inequality, and injustice. Let’s take a page from Moses and Aaron, and speak for those who cannot speak for themselves. And let’s never forget to keep drawing attention to the plight of millions of people still in need of their own form of deliverance.

They are out there, waiting for us.

Hillary Clinton is the former U.S. secretary of state and senator from New York, and a Democratic candidate for president.