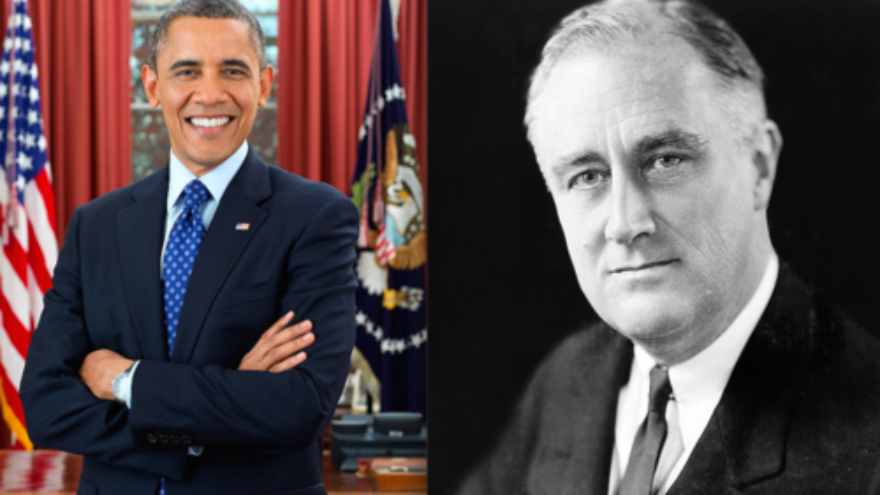 The Obama administration’s reluctance to support pro-democracy protesters in Hong Kong revives a familiar clash between human rights and diplomatic relations—a conflict that has repeatedly bedeviled past U.S. administrations, including during the Nazi era.

When pro-democracy protesters were tear-gassed by Hong Kong police on Sept. 28, the U.S. consulate there issued a statement calling on “both sides” to show “restraint.” It said, “We do not take sides in the discussion of Hong Kong’s political development, nor do we support any particular individuals or groups involved in it.” And Jeffrey Bader, who was President Barack Obama’s China policy director until 2011, said it was “understandable” that the administration wants to prove to China that the U.S. is not “the black hand behind the protests.”

Faced with a barrage of criticism from human rights advocates, White House spokesman Josh Earnest issued a mild statement expressing hope that Beijing will permit “a genuine choice of candidates [in forthcoming Hong Kong elections] that are representative of the peoples’ and the voters’ will.” The very fact that Earnest said it only in response to criticism naturally raised questions about whether the White House really meant it.

Certainly this administration has been consistent on China. When then-Secretary of State Hillary Clinton made her first visit to China in 2009, reporters asked her if she was going to bring up human rights concerns. She replied that “those issues can’t interfere with the global economy crisis, the global climate change crisis, and the security crisis.”

A Washington Post editorial charged that “Ms. Clinton’s statement will demoralize thousands of democracy advocates in China, and it will cause many others around the world to wonder about the character of the new U.S. administration.”

Perhaps the most ardent exponent of this approach was Secretary of State Henry Kissinger. His entire strategy of American relations with the Soviet Union in the 1970s was anchored in the view that the persecution of Soviet Jewry should not interfered with U.S.-Soviet trade.

The extremes to which Kissinger was willing to take this approach became apparent in 2010, when newly released Oval Office tapes revealed a conversation in which he advised President RIchard Nixon, in 1973, that even “if they put Jews into gas chambers in the Soviet Union, it is not an American concern.”

During the 1930s, President Franklin D. Roosevelt felt that maintaining normal relations with Nazi Germany was more important than protesting Hitler’s treatment of the Jews. The Roosevelt administration opposed the American Jewish community’s boycott of German goods and never suspended or even downgraded diplomatic or trade relations with the Nazis. Even in the wake of the Kristallnacht pogrom, in 1938, FDR only called the U.S. ambassador back from Berlin for “consultations. He did not break diplomatic relations with the Hitler regime.

The most disturbing example of FDR’s policy of maintaining friendly relations with Nazi Germany concerned the American journalist Varian Fry. He traveled to Vichy France in 1940, on a mission to rescue Jews and other anti-Nazi activists. Fry’s underground network smuggled some 2,000 refugees out of France, including such cultural luminaries as artist Marc Chagall, novelist Lion Feuchtwanger, and Nobel Laureate scientist Otto Meyerhof.

The Vichy and Nazi authorities complained to Washington about Fry’s activities. And the Roosevelt administration responded. In September 1940, Secretary of State Cordell Hull instructed the U.S. ambassador in Paris to warn Fry against “carrying on activities evading the laws of countries with which the United States maintains friendly relations.”

When Fry persisted in his refugee-smuggling work, the Roosevelt administration canceled his passport, forcing him to leave France and bringing his rescue mission to an end. A consular official in Marseilles who had been helping Fry, Hiram Bingham IV, was transferred out of France without explanation.

There is a common thread to these episodes. Each time, the U.S. administration behaved as if it was in a position of weakness, as if relations would be ruptured if it dared to utter a few words that displeased the oppressor. Yet each of the totalitarian regimes in question also had an interest in maintaining relations with the U.S. Would they really have forfeited the economic and political advantages of their relationships with America, just because they were annoyed that the U.S. was articulating its own deep-seated values?