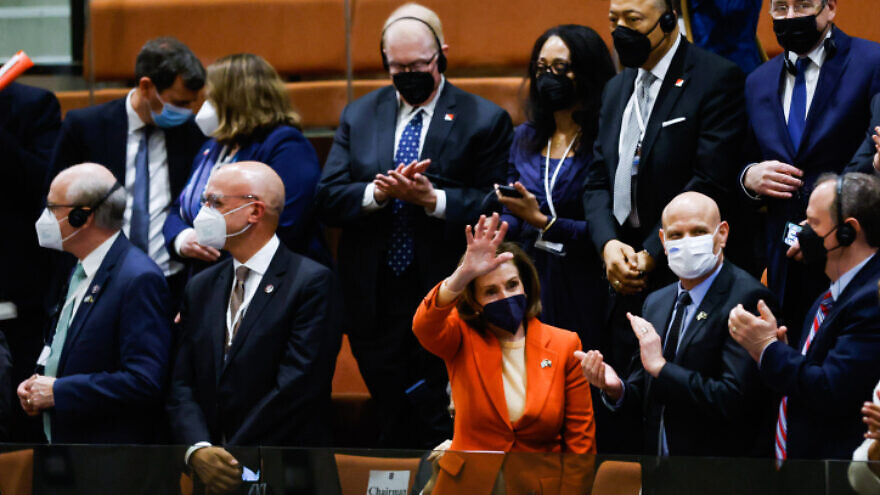 (February 16, 2022 / JNS) “We are together in the fight against terror posed by Iran and its nuclear development,” Speaker of the U.S. House of Representatives Nancy Pelosi said on Wednesday at the Knesset.

Iran “is a threat to the world,” said the California lawmaker, who is heading a delegation of high-level members of Congress. “Israel’s proximity to Iran is a threat to us all and the responsibility of all of us.”

Pelosi was greeted by Knesset Speaker Mickey Levy, who said: “The strategic alliance between Israel and the United States has proven that we know how to stand together, shoulder to shoulder, in the battle against murderous terrorism and radical Islam.

“Even at this moment, terrorist organizations from the Gaza Strip and Iranian proxies on our northern border are planning and working to attack and destroy us, and they are taking advantage of the quiet to gain strength and replenish their stockpiles of rockets,” adding that “Iran is a terrorist state. It funds terrorist organizations throughout the Middle East in order to sow instability and chaos.”

“The Iranian race for nuclear capabilities is troubling to every person in Israel, and it is still important to remember that Iran is not just an Israeli problem, but a regional and global problem. It must therefore not be allowed to develop nuclear capabilities,” concluded Levy. Later, in the Knesset plenum, he said that “we are all here in the Knesset of Israel with a uniform message that Iran must not be allowed to develop nuclear capabilities. ”

Pelosi noted that she is “very proud that the United States is Israel’s oldest ally,” and called the establishment of the State of Israel the “greatest accomplishment of the 20th century.”

She said that the U.S. hopes to complete the transfer of aid to Israel for the Iron Dome soon, but also stated that the delegation is in Israel to “illustrate our commitment to a two-state solution, Jewish and Palestinian. We will continue to work with Israel to advance this solution.”

As she entered the Knesset plenum, Pelosi was greeted by children from Sderot and the Gaza-border communities waving American and Israeli flags, and thanking her for providing the funding for the Iron Dome missile-defense system.

Pelosi also met with Israel’s Minister of Transport and Road Safety Merav Michaeli. They spoke about transportation as a tool for regional development across the Middle East, according to Michaeli’s office. And she held a meeting with Israeli Defense Minister Benny Gantz, who stressed the importance of expanding and deepening normalization and peace agreements in the region. He also emphasized his commitment to continue working with the Palestinian Authority.

Following their Israel visit, Pelosi and her delegation plan to travel to Germany and the United Kingdom.