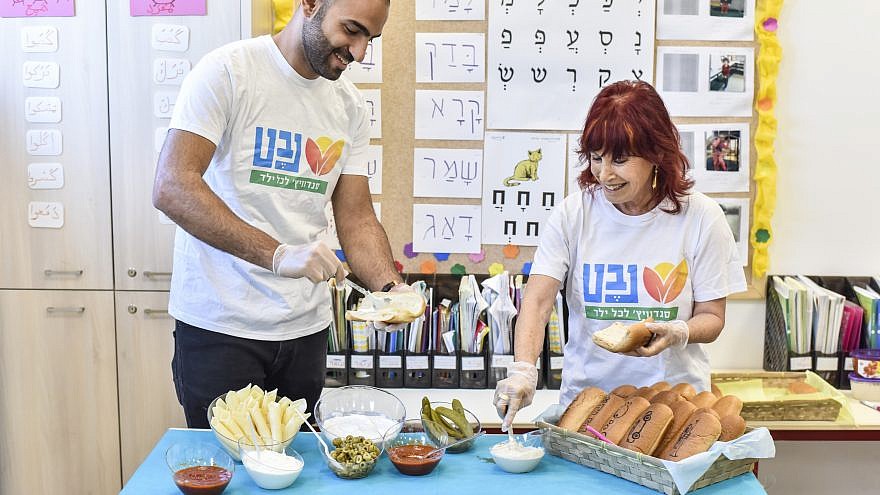 (January 4, 2019 / JNS) When is the last time you did something so mundane, like making a sandwich, and took the time to realize that those two slices of bread with some fillings and condiments in-between could be a tool towards breaking the cycle of poverty?

Well, one Israeli nonprofit organization is doing just that—using sandwiches to fight poverty and hunger among school-aged children across the Jewish state.

Known as Nevet (“sprout”), this Ra’anana-based organization currently provides 8,000 children in 130 schools from 50 municipalities throughout Israel with a breakfast sandwich each morning during the school week. That amounts to 1.3 million breakfasts per year.

The students come from low-income families or dysfunctional homes, and only through Nevet’s meal program are they able to take part in breakfast, considered by many nutritionists as the most important meal of the day.

Nevet CEO Rotem Yosef explains to JNS how it works: “At the beginning of every academic year, principals from schools with students from low-income families approach us and fill out a form on our website, giving us details on how many kids are in need of meals. We then decide based on our criteria and budget how we can help.”

Nevet explores the socio-economic status of the city/community where the school is located, the income of the parents in that area and the welfare status of the region to determine if students qualify.

If an institution’s students meet the criteria, that school will find fresh whole-wheat bread at its entrance every morning, delivered by a central bakery Nevet works with. Every two-and-a-half weeks, a Nevet driver will drop off all of the fillings for the sandwiches, such as tuna, pastrami, hummus or tahini. Nevet works with licensed nutritionists to ensure that the students are receiving only healthy foods.

One of Nevet’s biggest concerns is also to make sure that the privacy of the students who receive the sandwiches is maintained to avoid any embarrassment.

Yosef explains that “by 8 a.m. [the school makes sure] the sandwiches are ready and in the school’s office. The packaging doesn’t have a brand of any kind on it, so it looks like it came from home.”

She adds that “the students don’t even know that Nevet is a partner in this. They think it [the sandwich] came from the school. We want them to think that their school isn’t just about grades or discipline, but a place where they can get their basic needs—like a second home, especially for kids from dysfunctional families.”

‘Get out of the cycle of poverty’

But how can something as simple as a student receiving a sandwich break the cycle of poverty?

“We [Nevet] are giving the schools, the ‘fish,’ and the educational system is then teaching them how to fish.”

She adds, “If someone starts at point ‘A’ and he can learn, he can accomplish [things] and arrive at point ‘B.’ But if he is hungry and can’t focus, he can’t learn, and he will stay at point ‘A’. This little thing, the sandwich, gives him the same starting point as everyone else. He can learn, get an education and get out of the cycle of poverty.”

Nevet’s website includes research depicting a direct tie between school breakfast programs and academic performance. Studies show that eating breakfast regularly has a positive effect on behavior and atmosphere in class; students who eat breakfast perform better than others in class assignments, are more focused and more motivated.

While Nevet is able to accommodate a large number of children, some 13,500 youngsters remain on the program’s waiting list; at the same time, Nevet estimates that hundreds of thousands of others could benefit from their program. According to the Israeli government’s National Insurance Institute, there are 814,800 children living below the poverty line in Israel.

Yosef notes that major local companies have come on board as donors and as volunteers (and sometimes, as both) to help Nevet, including eBay, Wix.com, Bank Leumi and others.

Partnering companies assist in several ways, she says. Some adopt a specific school for an entire year and help prepare sandwiches weekly. Other companies prepare large quantities of sandwiches for many schools, sometimes on a quarterly basis. Another Nevet program allows students to visit some of the companies weekly as part of a mentoring program in which professionals are paired with struggling learners to tutor them in math or English.

Moti Cohen, a retired school principal who volunteers with Nevet, saw firsthand the impact that the organization’s sandwich program had on his students when he directed a school in the central Israeli city of Ramle.

He tells JNS that before Nevet’s sandwiches arrived, “there were kids who would buy breakfast at the local kiosk near the building; those who couldn’t afford to would just stand there on the side and wouldn’t eat. But after we joined the program, those kids received food, and were able to concentrate on their studies and learn, so it made a huge difference.”

Cohen spends his volunteer time meeting with various municipalities around the country, advocating that they partner with the organization.

While Nevet does not receive government funding, local municipalities and school systems partner with the program and contribute 50 percent of the budget needed towards sandwich distribution in their jurisdictions. Nevet raises the other 50 percent from private donors in Israel and abroad (via P.E.F–Israel Endowment Funds Inc.).

“The municipalities must understand the great need [for this program], so I come in as a retired principal and explain the situation,” says Cohen. “I think it helps a bit.”