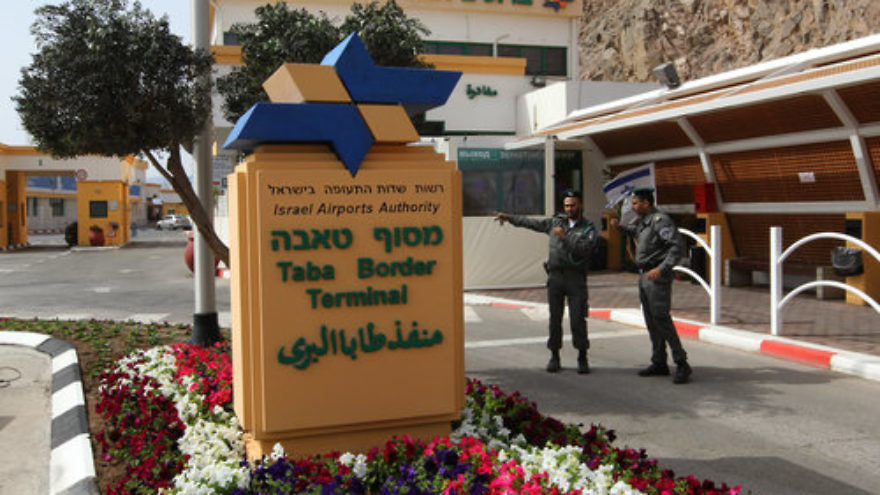 A wounded Israeli man is wheeled from Egypt to Israel, through the Taba border crossing, following a bombing at the Hilton Taba hotel in the Egyptian Sinai Peninsula, Oct. 7, 2004. Credit: Flash90.
Republish this article
1093 WORDS
Spread the word.
Help JNS grow!
Share now:

(April 23, 2017 / JNS) Despite repeated warnings from Israel’s Counter-Terrorism Bureau to stay away from Egypt’s Sinai Peninsula, a hardcore of resolute Israeli tourists proceeded with plans to head to scenic beach resorts during the recent Passover holiday.

In response, Israeli authorities—disturbed by intelligence of concrete Islamic State plots to target tourists in the Sinai—took the unprecedented step of shutting the Taba border crossing indefinitely, thereby preventing travel to Egypt by land. Israel reopened the Taba crossing Friday, but the Counter-Terrorism Bureau said it “reiterates that the threat to Israelis in Sinai is still severe, concrete and immediate.”

During the 1990s and 2000s, many Israelis descended to Red Sea resorts in the Sinai, where they enjoyed stunning views and Bedouin hospitality. They saw it as a perfect escapist paradise.

But then trouble began. Salafi-jihadist organizations began proliferating, dedicated to attacking all who stood in their way of establishing a fundamentalist Islamic state. A truck bomb killed dozens—including 12 Israelis—at a hotel in Taba in 2004. A year later, car bomb attacks killed 88 people at Sharm El Shekih resorts. Ever since, only the most determined Israeli tourists dare make their way to the Sinai.

How did the Sinai’s current instability come to be?

Zvi Mazel, Israel’s former ambassador to Egypt and a senior analyst with the Jerusalem Center for Public Affairs, told JNS.org that between 2011 and 2013, when Egyptian President Hosni Mubarak was in power, Israeli diplomats warned him repeatedly that his country would become a prime target for the Salafis. Mubarak did not take the threat seriously, Mazel said.

After Muslim Brotherhood leader Mohammed Morsi seized power in 2012, an understanding was reached between the jihadists and Morsi that allowed the terrorists to continue operating, the former Israeli ambassador explained. This allowed the Salafis to take over some areas of the Sinai, he said.

At the time, Morsi appointed now-President Abdel Fatah El-Sisi as his defense minister, and Sisi asked permission to cleanse the Sinai of the threat. Morsi denied that request.

“And then the big development came—Libyan members of the al-Qaeda-affiliated Ansar Al-Sharia organization started transferring weapons to Salafis in the Sinai. They smuggled in heavy weapons, like anti-tank missiles,” Mazel said.

After that point, attacks soared. In 2013, Sisi overthrew Morsi and began organizing the military against Islamic State-affiliated Sinai Province. The military needed to replace Egypt’s domestic security forces, which had traditionally fought terrorists but who were disbanded under Morsi.

Mazel said that while an Sisi-led Egypt has “accomplished a lot, and lowered attacks,” the Egyptians’ current tactics are not very well-suited to take on the Sinai terror threat.

Who is Sinai Province?

In 2011, Sinai-based Sunni jihadists formed a coalition called Ansar Beit Al-Maqdis that mostly targeted Israel as well as a gas pipeline leading to Israel and Jordan. Attacks included a cross-border raid in 2011 in which Salafi terrorists fired an anti-tank missile at an Israeli passenger bus and attacked IDF soldiers, killing a total of seven Israelis.

Ansar Beit Al-Maqdis eventually swore allegiance to Islamic State and rebranded itself as Sinai Province. The new Islamic State affiliate, most active in the northern Sinai, began focusing its attacks on Egypt’s security forces and symbols of the Egyptian state.

Further, in 2015, Sinai Province bombed a Russian airliner that was flying over the Sinai, killing all 224 people on board.

The source estimated that Sinai Province has 500-1,000 members, “significantly smaller than terrorist entities in Gaza and southern Lebanon that have independent control of their areas.”

“The ability of Hamas or Hezbollah, or organizations in Syria, to threaten [Israel] is far more significant than an organization like Sinai Province, which does not control its own territory, and is being pursued constantly by the Egyptian military,” he said.

Since mid-2016, Sinai Province attacks “have not disappeared” but have become less frequent than their incidence from 2014-2015, according to the source, who credited the Egyptian military with having a significant impact on the terrorist organization’s declining influence. “Five to six years ago, the threats against Israel [from the Sinai] were much more severe,” he said.

The source explained that Islamic State’s ideology is to first take on “enemies at home, and only then to attack others,” lending insight into its Sinai affiliate’s priorities.

“This does not mean that they think the Jews are good, and that we are immune to attacks, but it means that at the moment, their more urgent target is Egyptian rule,” he said.

Most Sinai Province members are local Bedouins, though some foreign recruits—drawn by ideological affinity and internet radicalization—have also joined. Their weapons include AK-47 assault rifles, guided anti-tank missiles, artillery shells and an array of explosive materials. The weapons are smuggled in from Libya and Sudan, and some were also seized in raids on Egyptian security forces.

The governments of Israel and Egypt do not speak publicly about potential cooperation against Islamic State, but some hints occasionally appear.

IDF Chief of Staff Lt.-Gen. Gadi Eizenkot told Army Radio this month that Israel and Egypt have a “common challenge with Egypt to hit these terrorists and prevent them from disrupting lives.”

Islamic State had enjoyed robust cooperation with Hamas in Gaza. This relationship helped Hamas smuggle arms into Gaza, while Hamas-run hospitals cared for Islamic State’s wounded fighters. Now, however, relations between the terrorist organizations are deteriorating due to Egyptian pressure on Hamas.

Ideology also plays a role, according to the Israeli defense source.

“We tend to see Hamas as most extreme Islamic entity,” he said, “but those [like Islamic State] who view the path of Islam’s prophet, Muhammad, as the only correct path take a dim view of Hamas’s practices, like holding elections, talking with the infidel Egyptian rulers, and accepting cease-fires with Israel.”