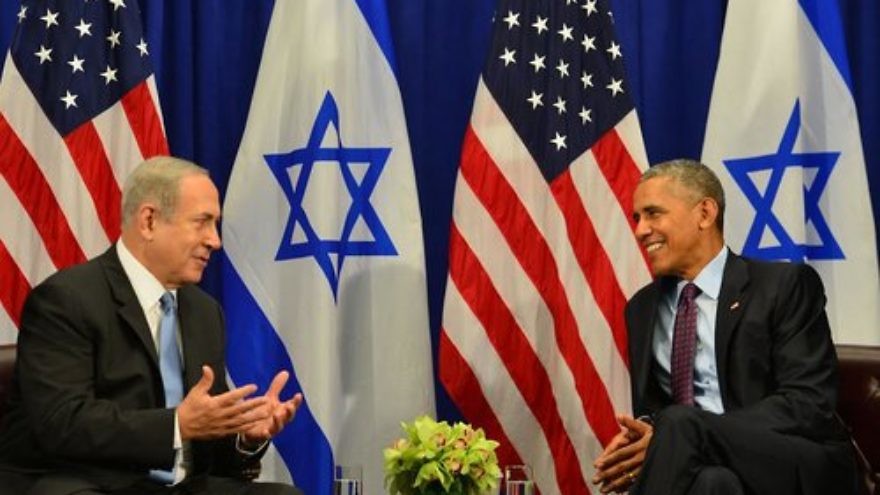 (September 30, 2016 / JNS) JERUSALEM – A tour of any Israeli army base reveals a wealth of American equipment. M-16s are stamped, “Property of the U.S. Army.” Tuna cans and teabags come with ShopRite labels. And tents have English-language instructions sewn onto their fabric walls.

This close relationship extends into all areas of defense procurement, especially when it comes to Israel’s high-tech qualitative edge in air power, missile defense and other related areas.

The new $38 billion Israel security deal recently signed – the U.S.’s largest ever aid package to Israel – fundamentally changes the way Israel will be able to spend the money.

Traditionally, America’s billions in military aid have been constructed, in part, as a subsidy for U.S. manufactures, with Jerusalem required to expend some three quarters of the funds in the United States.

But now, Jerusalem will no longer be allowed to spend 26 percent of the money on supplies and services by local defense contractors. This promises to force significant changes in the way Israeli companies do business.

And while the new deal will bring in $3.8 billion a year over the next decade – a $700 million increase over the last MOU – critics, such as Israeli Prime Minister Benjamin Netanyahu rival, Yair Lapid, say the new deal will cost Israeli manufacturing jobs. He also charges that the amount granted would be even higher if not for Netanyahu’s high-profile campaign against Obama’s nuclear deal with Iran last year.

Lapid’s worries are echoed by several local defense contractors, who initially expressed concern they won’t be able to adapt.

One industry source, quoted by Globes, the Israeli business daily, said, “this clause is a catastrophe for small and medium-sized Israel defense companies.”

He added that, “Spending in shekels from the defense budget on procurement of weapons and systems from the local industry is already low. And procurement from small defense companies is made possible to a large extent by conversion into shekels of aid money in dollars.”

Small and medium-sized companies will be affected as they will lose business, unlike larger firms that can rely in export income to help weather the storm.

Another industry leader was quoted saying he believed between 70 and 80 local firms could close their doors as a result.

Another industry insider, speaking with the Jerusalem Post, explained that many of the larger companies have the option of setting up American subsidiaries or becoming subcontractors to U.S. firms, however, they too will certainly face hardships.

A representative of the Economy and Industry Ministry agreed, telling Haaretz that smaller businesses may not be able to make such a transition.

American firms have become increasingly skeptical of how the U.S. subsidizes their Israeli counterparts, especially given competition in arms exports to countries such as India, Bloomberg View analyst Eli Lake said in a recent article. It seems such concerns have been heard by the White House.

“Besides a general [statement] saying that we regret all actions that might harm the Israeli defense industry, I can’t comment,” a spokeswoman for Israel’s Elbit Systems told JNS.org. Several other firms contacted by JNS.org also declined comment.

Under the MOU, Israeli domestic spending of American money won’t be cut until the sixth year of the new 10-year deal. This means that local expenditures will actually rise in the short term, creating a buffer period which companies can then prepare for the future.

Israeli defense firms have been doing business with American companies for 20 years,
Prof. Efraim Inbar, director of Bar-Ilan University’s Begin-Sadat Center for Strategic Studies, told JNS.org. “The importance of this is it allows Israel to sell weapons to the American army. The [U.S.] Army is sometimes limited to buying from American suppliers, so if [Israel] has subsidiaries in the Unites States this makes it easier.”

Upside to the deal

Moreover, he said, the MOU is “not a holy document and those things can be renegotiated in the future.” In the meantime, having such a multi-year commitment “makes it easier for our budgetary planners in the IDF.”

Chuck Freilich, a former deputy national security advisor in Israel, told JNS.org, there’s likely to be increased competition with American defense contractors as well as new cooperative agreements between companies in both countries.

Cutting offshore spending was a sign the deal could have been better, he said. Freilich noted that in the late 1980s, after Jerusalem’s plans to manufacture its own fighter plane, the Lavi, were shelved, “everybody thought that would a be catastrophe. But it forced industry here to get its act together and [everyone] made more money in the end,” he said.

And, just as Israeli firms are beginning to partner with their American counterparts, there could be increased agreements with other countries like India and Singapore, which buy significant amounts of military hardware from Israel, he added.

“It’s a very negative development but sometimes you turn adversity into opportunity,” Freilich said. “Maybe in end, the defense industries will find ways to cope, and in the long term, even benefit, [but] I don’t see how yet. In the short-to-medium term, it’s definitely a negative development.”

Asked if diplomatic relations between Israel and third party countries, which buy its arms, would be effected by fallout from the new U.S.-Israel deal, the Begin-Sadat Center’s Inbar said he doesn’t believe there will be any effect on relations with existing clients abroad. Israel has traditionally been constrained in selling to certain countries, such as China, because of American sensitivities.

Ambassador Alan Baker, director of the Institute for Contemporary Affairs at the Jerusalem Center for Public Affairs, told JNS.org, “I think now Israel will be more intent on [strengthening the] arms industry to make up the lack of income.”

Firms will have to compensate for lost business, said Oded Eran, PhD., a senior research fellow at Tel Aviv University’s Institute for Strategic Studies. Both large and small companies “will have to invest a lot of effort” and while some may be successful, “some of them may need to be assisted by the Israeli government,” he added.