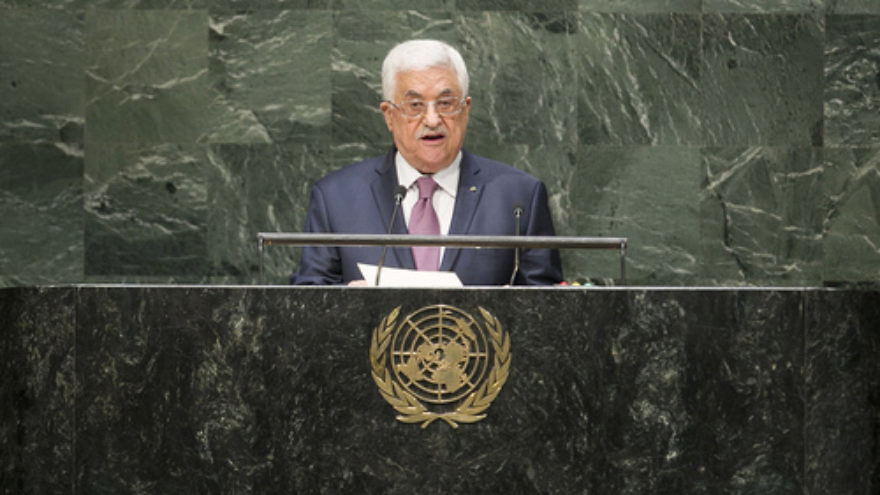 (January 19, 2015 / JNS) The Israeli government has launched a public diplomacy campaign to discredit the legitimacy of the International Criminal Court’s (ICC) recent decision to start an inquiry into what the Palestinians call Israeli “war crimes” in the disputed territories.

According to ICC prosecutor Fatou Bensouda, the inquiry—which was initiated after a request by the Palestinian Authority (PA)—is not a formal investigation, but rather “a process of examining the information available in order to reach a fully informed determination on whether there is a reasonable basis to proceed with an investigation pursuant to the criteria established by the [ICC’s] Rome Statute.”

Palestinian Authority President Mahmoud Abbas recently signed the Rome Statute in order to join the ICC after failing to get a U.N. Security Council resolution passed that called for Israel’s withdrawal from the disputed territories by 2017.

Israel’s campaign against the ICC inquiry will focus on the fact that the because the charges were filed by the PA, which is not a state, the court has no authority to act. In addition, the campaign will point out the court’s bias against Israel—a country on the frontline of the war against global terrorism that makes sure to abide by international law by way of an independent legal system.

The Israeli government decided to launch the public diplomacy campaign at an emergency meeting in response to the ICC decision that was convened by Prime Minister Benjamin Netanyahu. The meeting, which took place at Netanyahu’s office, was attended by Israeli security, legal, and diplomatic officials.

The ICC’s decision to launch the inquiry into Israeli actions is “the height of hypocrisy and the opposite of justice,” Netanyahu said Sunday at the start of his weekly cabinet meeting, two days after the court announced the inquiry.

“During my years of public service, both as U.N. ambassador and as prime minister, I encountered these kinds of events, but this decision by the [ICC] prosecutor is in a league of its own,” Netanyahu said. “It gives international legitimacy to international terrorism.”

The prime minister said Israel would fight the ICC’s decision with every means it has available, including the enlistment of its allies. Along those lines, Israel is lobbying member states of the ICC to cut funding for the tribunal, Israeli Foreign Minister Avigdor Lieberman said on Sunday. Israel, which like the United States does not belong to the ICC, hopes to dent funding for the court that is drawn from its 122 member states in accordance with the size of member states’ economies, said Lieberman.

“We will demand of our friends in Canada, in Australia, and in Germany simply to stop funding it,” Lieberman told Israel Radio.

“This body (the ICC) represents no one. It is a political body,” he added.

A loss of funding would exacerbate the ICC’s already serious financing problems. Last week, Reuters reported that the unexpected arrival of an indicted defector from Joseph Kony’s Lord’s Resistance Army in Uganda would put prosecutors under severe financial strain.

The overwhelming bulk of the court’s funding comes from advanced economies of Europe and North Asia. Japan is the largest contributor, giving $23.7 million in 2014, followed by Germany, which gave $15.7 million. France, Britain, and Italy are also major contributors to the ICC’s budget, which will rise 7 percent to $164 million in 2015. Canada contributed $6.5 million. Japanese Prime Minister Shinzo Abe and Canadian Foreign Minister John Baird visited Israel this week, and the Israeli government planned to raise the ICC funding issue with both foreign leaders.

“Israel is adamant that it will have the right to defend itself against all those who wish to propagate terror and other attacks against its citizens, against its territory,” Netanyahu said at the start of a meeting with Abe. “We will not have our hands ties by anyone, including the ICC. We will do what is necessary to defend ourselves wherever we need to do so.”

Despite Israel’s lobbying efforts, even countries that are traditionally close to the Jewish state are unlikely to renege on their treaty commitments to fund the ICC, said Kevin Jon Heller, a professor of law at London’s School of Oriental and African Studies.

“Germany is probably the least likely country in the world to go against the ICC no matter how supportive of Israel it has traditionally been,” Heller said. “It was one of the very leading states in the creation of the ICC.”

ICC prosecutors said Friday that they would examine “in full independence and impartiality” crimes that may have occurred in the disputed Palestinian territories since June 13, 2014. This allows the court to delve into alleged war crimes during Operation Protective Edge, which took place in July and August, but not into Hamas terrorists’ June 12 kidnapping and murder of three Israeli teens in Gush Etzion. Hamas on Saturday welcomed the ICC inquiry and said it was prepared to provide material for complaints against Israel.