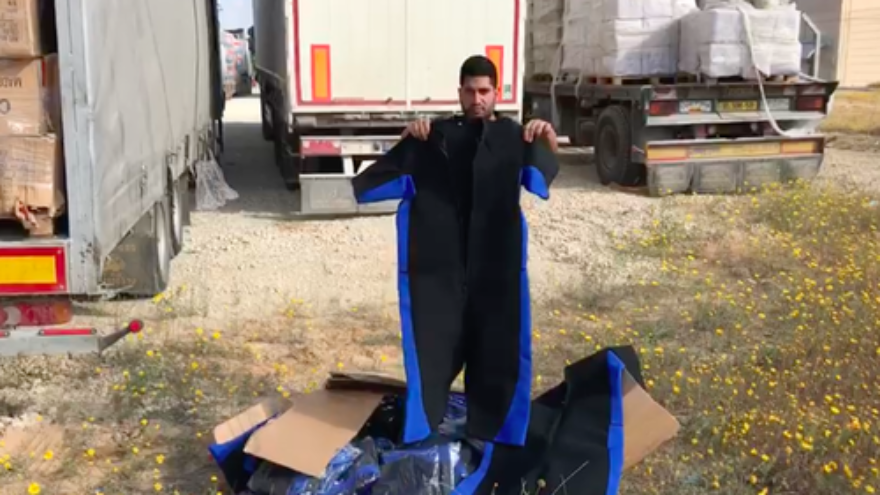 Palestinian residents of Gaza just want some soccer balls and perhaps a few Frisbees, to help break the monotony of life under siege. Yet the insensitive Israeli authorities, enforcing their ruthless blockade, recently intercepted a shipment of innocent, humanitarian sporting goods that would have brought a little light to the dark of lives of Gaza’s children.

That’s what you can expect pro-Palestinian human rights groups and their media supporters to report. The truth, however, is different. Very different.

In an attempt to be kind to Gazans and appease international criticism, the Israeli government allows numerous trucks with supposedly “humanitarian” items to enter Hamas-ruled Gaza each day.

It’s a big risk, because Hamas repeatedly has exploited Israel’s kindness by using the humanitarian shipments as means of smuggling in materials that can be used for terrorism. They did it again earlier this month.

Two and a half years ago, five Hamas terrorists in scuba diving suits swam ashore at Israel’s Zikim Beach, north of Gaza. Fortunately, they were intercepted and killed by Israeli troops before they could reach their target. The Israeli authorities have not forgotten that incident and are on the outlook for attempts to smuggle scuba equipment to Gaza.

Perhaps the most important revelation about how Hamas smugglers have taken advantage of Israeli—and American—kindheartedness came from Dennis Ross, in an August 2014 op-ed in The Washington Post.

Ross served as a senior aide to then-Secretary of State Hillary Clinton and as Middle East director on the National Security Council during 2009-2011. Those were the years when Hamas was starting to build tunnels to enable its terrorists to reach Israel from Gaza, and the Israelis began restricting the importation to Gaza of building materials that could be used for the tunnels. So the Obama administration sent Ross to the region—to pressure Israel.

In his op-ed, Ross admitted what he did: “I argued with Israeli leaders and security officials, telling them they needed to allow more construction materials, including cement, into Gaza so that housing, schools and basic infrastructure could be built. They countered that Hamas would misuse it, and they were right.”

Assured by the Obama administration’s insistence that the cement would not be misused, Israel allowed it to be imported. The result? Hamas built “a labyrinth of underground tunnels, bunkers, command posts and shelters for its leaders, fighters and rockets,” Ross acknowledged. They built them with “an estimated 600,000 tons of cement,” some of which was “diverted from construction materials allowed into Gaza,” he wrote.

Three years from now, I don’t want to be reading an article by Ross’s successor belatedly admitting that he shouldn’t have pressured Israel into easing up on the blockade of Gaza. The Trump administration needs to learn from Ross’s mistakes.

Don’t give Hamas the benefit of the doubt. Don’t pressure Israel to permit extra “humanitarian” shipments to Gaza. Concrete for homes can also be concrete for tunnels, and innocent-looking sports equipment can be—and has been—used for terror.