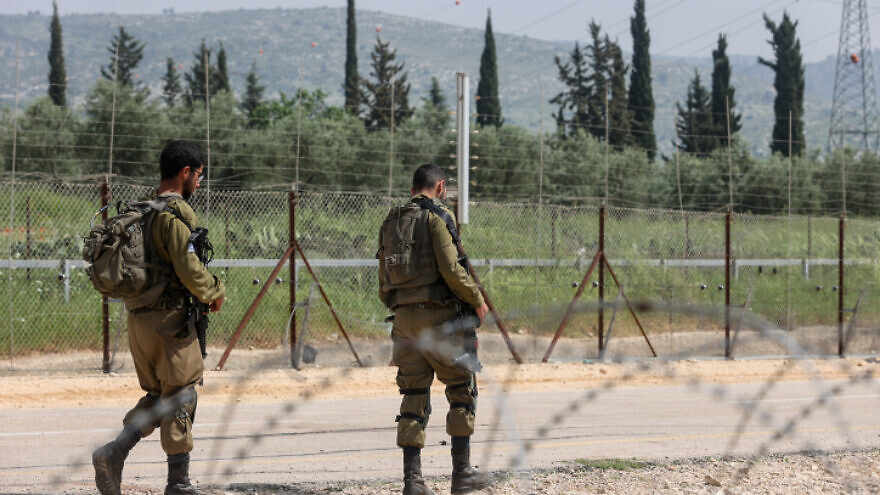 Israeli soldiers stand guard near a hole in the security fence, as Palestinians try to cross into Israel, near Mevo Horon, April 10, 2022. Photo by Flash90.
Spread the word.
Help JNS grow!
Share now:

(June 20, 2022 / JNS) A Nablus-area resident was killed by Israel forces on Sunday while attempting to breach the security fence near Qalqilya, according to Israeli media reports.

The official Palestinian WAFA news agency identified the man as Nabil Ahmad Ghanem, 53. According to WAFA, Ghanem had been on his way to work in Israel “when soldiers opened fire, killing him instantly.” According to the Israel Defense Forces, the suspect had been banned from entering Israel for security reasons, according to Ynet.

According to the Israeli military, a number of Palestinians were observed attempting to penetrate the fence with tools they had brought with them. Israeli troops initiated an arrest protocol, which begins with calling out warnings and firing in the air. When the suspects ignored the warning fire, the soldiers fired at the suspects, killing one.

“The IDF has recently updated its rules of engagement … regarding those who cross the seam line in Judea and Samaria. Soldiers are now allowed to open fire after conducting the suspect arrest protocol,” the report stated.

The incident is “under review,” the military said in a statement.