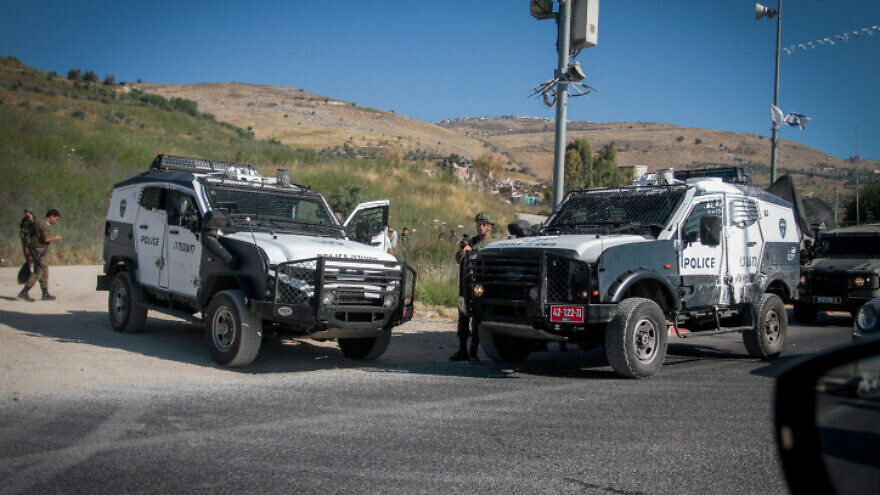 Israeli security forces secure the scene after a Palestinian assailant attempted to stab soldiers near the Hawara checkpoint, outside Nablus, May 17, 2022. Photo by Nasser Ishtayeh/Flash90.
Spread the word.
Help JNS grow!
Share now:

(May 17, 2022 / JNS) Israeli forces thwarted a terrorist attack at the entrance to Nablus/Shechem on Tuesday morning, the Israel Defense Forces said in a statement.

A knife-wielding Palestinian charged soldiers stationed near the entrance to Nablus, who opened fire on and neutralized the assailant, according to the military.

The terrorist was evacuated to the hospital in serious condition, Walla reported.

The IDF continued its ongoing counterterrorism operations in Judea and Samaria overnight Monday, conducting arrest raids in a number of locations, including the towns of Qarawat Bani Hassan, Hable, Halhul, ad-Dhahiriya, the Aida and Dheisheh refugee camps and Nablus, according to the IDF. A total of 18 suspects were taken into custody.

All of the suspects were transferred to security forces for further processing.

On May 12, Israeli security forces arrested two suspected accomplices of the terrorists who carried out the deadly May 5 terror attack in Elad.

The suspects were arrested in the villages of Brukin and Rumana in northern Samaria, according to the military.