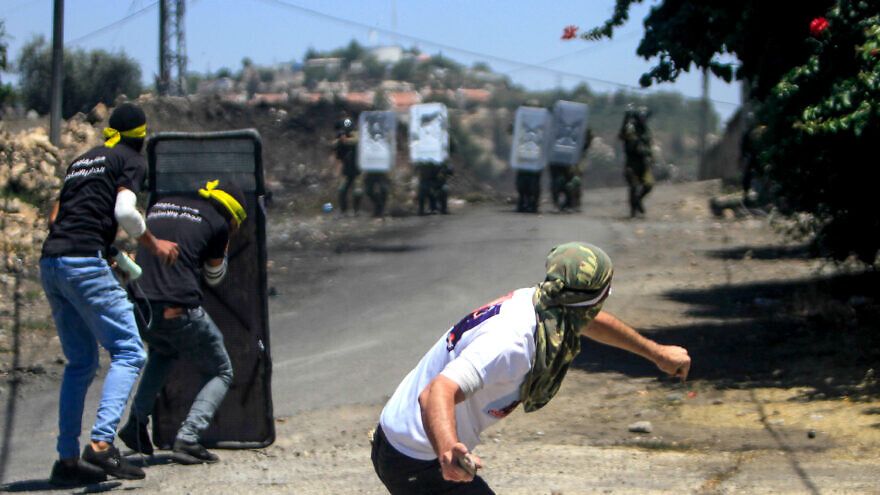 Palestinian demonstrators clash with Israeli security forces during a protest in the village of Kfar Qaddum, near the West Bank city of Nablus, July 22, 2022. Photo by Nasser Ishtayeh/Flash90.
Republish this article
998 WORDS
Spread the word.
Help JNS grow!
Share now:

(August 2, 2022 / JNS) Since being launched by the Israel Defense Forces in March this year, “Operation Breakwater,” aimed at stopping a wave of deadly Palestinian terror attacks against Israelis, has significantly dented the motivation and intent of terrorists in the West Bank to act.

The latest signs of this trend appeared early on Tuesday when the Israeli military launched an operation that resulted in the arrest of Bassam al-Sa’adi, the leader of Palestinian Islamic Jihad (PIJ) in the West Bank, who is suspected of constructing terror cells in the region.

The Israeli forces that entered Jenin were met with gunfire, and a battle ensued. At least one gunman, later claimed by PIJ as one of its members, was killed, and others were injured.

The Israeli forces did not suffer any casualties while seizing weapons, ammunition and cash. A total of 12 terror suspects were arrested that night, and more than 50 were captured in recent days on suspicion of involvement in terrorist activity.

The northern West Bank represents an epicenter of growth in terror activity over the past year, particularly in the cities of Jenin and Nablus.

Even before the terror wave erupted in March and April, leading to the murder of 19 people, the IDF’s Central Command already identified back in December 2021 that a challenging period was coming up on the horizon.

As a result of this assessment, the territorial brigades of the IDF that operate across the West Bank began preparing for a range of scenarios. Preparations were also made on the ground.

The terror attack that stuck Beersheva on March 22 was conducted by a terrorist acting on ISIS ideology, while two terrorist gunmen who went on a deadly shooting spree in Hadera on March 27 were also motivated by ISIS ideology. Unlike expectations for the West Bank to be the scene of the major violence, Arab terrorists had struck from within Israel. Two days later, however, the wave shifted, as a terrorist from Ya’bad, near Jenin, launched a deadly shooting attack in Bnei Brak.

By that time, the IDF’s Central Command was dealing with intelligence alerts of multiple shooting terror cells plotting attacks from the West Bank, against Israeli targets on both sides of the Green Line. Shooting attacks had become the central modus operandi of the terrorists, most of whom were locally organized or acted on their own, though they were fueled by massive incitement to violence, particularly on social media, by Hamas and other terror elements.

The escalation had arrived, and the IDF’s brigades in the West Bank went into action. Several gunmen were shot dead in seconds after launching their attacks—a response time enabled due to prior preparedness measures. This was accomplished without changes to the IDF’s rules of engagement.

Then the number of attacks inside Israel dropped drastically, as “Operation Breakwater” gained momentum, and nightly raids were conducted by the IDF in the heart of terrorist hornet’s nests, like the Jenin Refugee Camp. A growing number of cells planning attacks on civilians were foiled at the planning stage, with Israeli security forces reaching them in their homes in the dead of night and surprising them. 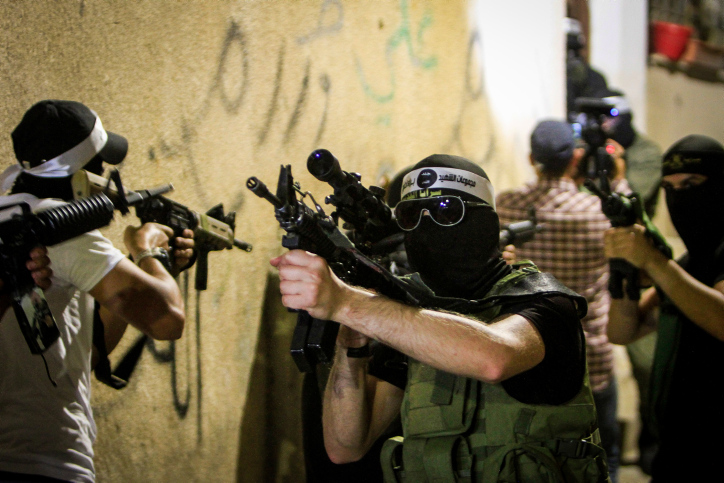 A plummet in the number of attacks

Meanwhile, Central Command deployed large forces to gaps in the security fence used by terrorists to infiltrate Israel, and the Israeli Ministry of Defense fast-tracked a large-scale program to build a barrier in the high-risk areas.

The result was a plummet in the number of attacks within Israel and a significant drop in terrorism in the West Bank as well.

While the operation also extend south into the Judea area, most of the terrorists and cells remained focused in the northern Samaria section.

The number of terrorists captured and cells thwarted has led to a significant drop in their motivation and intent to act, although the risk has, of course, not vanished.

As the IDF focused its raids on northern West Bank cities, it increasingly ran into informal “battalions” made up of gunmen who are affiliated with terror organizations like Hamas and PIJ. Such gunmen often pose in the streets with their firearms but do not launch frontal assaults on IDF units taking part in security raids; rather, they fire when they see an IDF operation in progress and flee.

Many have been hit by IDF return fire despite the hit-and-run tactics. Such gunmen have not recently conducted frequent shooting attacks on roads used by Israeli drivers in the area or on Israeli communities in the West Bank, though there have been sporadic incidents of that nature.

Meanwhile, after a spike in attempts by Hamas and PIJ to orchestrate terrorism in the West Bank from their headquarters in Gaza and in Lebanon, such attempts have returned to more “normal” levels recently. These remote orchestration efforts, in which local terrorists are often recruited over the Internet and receive money to begin purchasing firearms (and recruit additional members), as well as instructions, are also focused in the northern West Bank.

The Israel Security Agency (Shin Bet) disrupts hundreds of such plots every year.

Throughout this period, security coordination between the IDF and the Palestinian Authority’s security forces has remained at an overall high level, irrespective of the diplomatic clashes between Israel and the P.A.

Forged by a common interest in repressing Hamas and PIJ in the West Bank, the P.A. has not resisted the IDF’s stepped-up counter-terror raids in the West Bank at all, after its own forces struggled greatly in places like Jenin.

Meanwhile, the number of Palestinians illegally crossing from the northern West Bank into Israel has dropped from thousands to tens per day, and as the security barrier begins to approach completion, those who will cross to work in Israel for weeks at a time may find themselves unable to return home.