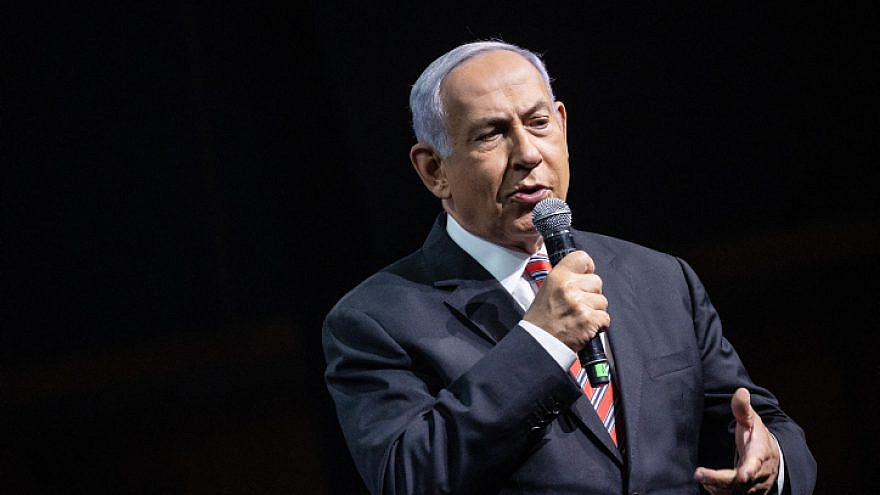 (March 21, 2021 / Israel Hayom) It used to be the norm for a right-wing prime minister on the campaign trail to visit settlements. Times have changed; A trip to Bedouin town of Tuba-Zangaria in northern Israel is now more appealing than a stop in Alon Shvut—as is the drive.

Israeli Prime Minister Benjamin Netanyahu is certainly enjoying the view. Enjoying it? Excited by it—he exclaims at every sight that pops up as his armored car passes it—look at that crane, look at the interchange built here, look at the construction. He really does seem moved, and yet these things are something I (and most Israelis) take for granted.

On my way to the Prime Minister’s Residence earlier, the taxi driver claimed that if we were a less privileged country, Netanyahu would be assured of 50 seats in Tuesday’s election.

“Instead of saying thank you to Bibi, people whine,” he said.

Subscribe to The JNS Daily Syndicate
by email and never miss
our top stories
Q: You’re flourishing in the [polls].

A: I like to meet with people in the field more than being walled in or running from meeting to meeting.

Q: How do you rate this campaign, compared to others?

A: High. The public is throwing itself into it. I would enjoy it more if we could fill auditoriums, because at every election event hundreds of people wait outside, and in my assessment, there are eight seats’ worth of voters we can’t guarantee will vote on election day. We have an opportunity to establish a true right-wing government with a large Likud at its head, emerge from the rotation mess, and found the national government we always dreamed of.

A: There has never been a national government that could balance things the way we wanted, there was always someone who spoiled it. [Bayit Yehudi leader] Naftali Bennett formed an alliance with [Yesh Atid head] Yair Lapid and didn’t allow me to bring in the haredim. As a result, we got a bad finance minister and we couldn’t pass the reforms we wanted to. In my opinion, Bennett has already made a deal with Lapid.

Q: Bennett has been the problem for 12 years?

A: There’s always someone who blocks. Ever since the “brotherhood” we’ve been prevented from making changes whose time has come, that need to be made. It’s time to change this and we have a one-time opportunity to do it, with one leader who will jump-start the Israeli economy.

Q: But the prime minister was able to get vaccines, he’ll surely be able to set up a right-wing government.

A: If we had a presidential system, it wouldn’t be a problem. I would have beaten [Hatnuah Party leader] Tzipi Livni and Bennett and [Labor head] Isaac Herzog and Lapid. But the system here is a parliamentary one. When [veteran Channel 12 journalist] Amnon Abramovich and other left-wing commentators praise Bennett and [Yamina No. 2] Ayelet Shaked and [New Hope leader] Gideon Sa’ar, they split the right-wing vote. There are 70-80 seats for the right, and the “Channel 12 Party” is trying to lull the right-wingers into not showing up to vote, as well as convince them to vote for parties that will eventually join the left-wing bloc.

Q: Do you really think they’ll join the left?

A: Yes. When I said the same about [Yisrael Beiteinu leader] Avigdor Lieberman back in the day, people said, “No way, he’s right-wing, he lives in [the settlement] Nokdim.” I told them, “you’ll see, it will happen.” And you see.

Q: Let’s say you’re out of the picture, and the other candidates remain. What will things look like here?

A: The people vying for the crown are usually ones who failed to win elections in the true democratic party, the Likud, and are looking for a way to vent their frustration, and the media pumps them up. Other than Channel 20, most of the media has enlisted just like another party. There are people here and there who deviate from the line in secret, but for the most part, they pump up everyone who appears as the [next[ great hope, knowing that he will ultimately be under the left.

Q: What about the future of the Likud?

A: There are important forces who have joined and are joining the Likud, and I intend to promote a new leadership.

Q: Is there anyone specific you’ve spotted?

A: I’m not mentioning names at this stage, but there are young men and women who could lead the country in the future. One of my goals is to invest in them.

Q: What’s the coolest thing about being prime minister?

A: I like taking an undercover convoy to the beach or an orchard and getting out of the car and just walking. And I do that, it’s no big deal. In the Jerusalem hills, the Sataf spring. I like that best.

Q: You could have asked someone else to make the phone calls to Pfizer.

A: [Pfizer CEO Albert] Bourla told me that was the difference between Israel and 200 other countries. We were successful with the vaccines because they sent advisers, and I carried out the mission myself. Obsessive, but in the positive sense. And I will be about the economy, now, too.

[On March 11, Bourla praised Netanyahu’s “obsessive” efforts to secure vaccines for Israel, telling Channel 12 the Israeli premier had called him “30 times” on the subject.]

Q: And about Israeli sovereignty, or has that run its course?

A: It hasn’t, and I raised the issue from the very start and I’m continuing with it. From the beginning, I’ve said that I’ll implement sovereignty in a consensus because we will have to deal with resolutions by the United Nations Security Council and an American veto.

Q: What is the hardest thing about being prime minister?

A: The price my family pays. Because people here can’t manage to get rid of the prime minister at the polls, they try to do it through other means, legal witch-hunts and slander in the media.

Q: Do your wife and children ever complain? Do they ever say, “What do we need this for, you can make a lot of money anywhere in the world without us suffering, let’s just be a happy family?”

A: Yes, obviously that’s come up. We’ve talked about it. But in the end, it’s a joint decision. I was blessed with a wonderful family, and that’s very lucky. If I wanted to concentrate on my own home, I could, but my family feels that they’re part of the mission. We aren’t trying to get people to like us or win approval from pundits in studios. We are proud of our legacy and our national outlook.

A: Now, certainly not. We are on the verge of great successes with the economy, with peace, in technology. I’m going to turn Israel into a world superpower. The Times of London wrote that the surprise tourist destination of the world was going to be Israel. That wasn’t because of any Likud talking points. In Europe, no one can make restaurant reservations because of lockdowns, but in Israel, you can’t reserve a table even when the restaurants are packed.

Q: Because it’s hard to bring people back from furlough to uncertain employment.

A: Furloughs were necessary and saved people from starving. Now I have a new economic plan whose first point is to encourage businesses to bring back furloughed workers and encourage people on unemployment to get back to work. After the election, I’ll set up a COVID economics cabinet with me as chairman. It’s a 15 billion shekel [$4.5 billion] plan. Aside from that, we expect a drastic tax cut and the start of 40 billion shekels [$12.1 billion] worth of mega-projects that I have agreed on with the United Arab Emirates.

Q: The self-employed are afraid they’ll have to return their grants.

A: They won’t be asked to. We are going to see 7 percent growth.

A: I dispute the Treasury’s projections. I always have, and I’ve always been right. Five percent is the projection for global economic growth. We’ll be at 7 percent and possibly 8 percent. We are the fastest-growing western economy.

Q: You once referred to Arabs going to the polls “in droves.”

A: You know those weren’t my exact words, right? In the last election, I was in Qalansawe, in Fureidis [majority-Arab towns]—the list is long. The historic novelty is that we broke the Palestinian veto on the peace process and the perverse formula of territory in exchange for peace. We changed the relations between Jews and Arabs outside of Israel, as well as in it. I’m proud of that change and I want to complete it, as well as stop Iran from getting nuclear weapons. These are my missions.