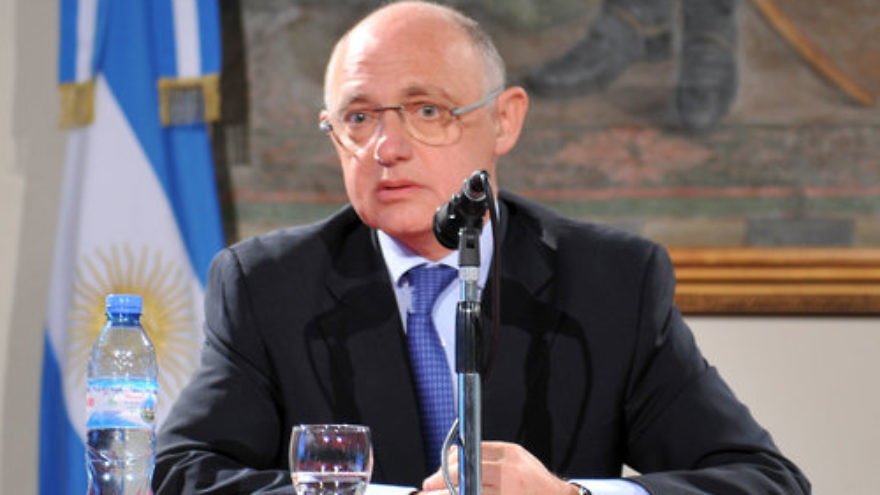 It has been 23 years since the AMIA Jewish center in Buenos Aires was devastated by a Hezbollah truck bomb, claiming the lives of 85 people and wounding hundreds more. It is a little less than three years since Alberto Nisman, the special prosecutor investigating the AMIA atrocity, was found dead in his apartment, one night before he was due to unveil a complaint accusing Argentina’s own government of colluding with Tehran in a secret pact to exonerate the Iranians of responsibility. During all of that unforgivably long stretch of time, nobody has been prosecuted for either of these crimes, nor stood in a courtroom to reveal the truth, once and for all.

But then, it’s often the case the delivery of justice takes time. It’s also true that the passage of time does not lessen the importance of pursuing the guilty. This is why, for example, any pity for elderly Nazi war criminals who suddenly find themselves on trial is misplaced. For that same reason, when there is a sensational development in the epic tragedy that is the AMIA bombing—as there has recently been—we would be wrong to regard it as the latest installment of a detective story that began in the mid-1990s, and correct to see it as a milestone on the way to convicting the Iranians and their proxies for this crime.

In late August, Argentina’s former ambassador to Damascus, Roberto Ahuad, appeared before the Argentine government’s official investigation into the collusion between the Iranians and the country’s previous president, Cristina Fernandez de Kirchner. In his testimony, Ahuad gave an eyewitness account of two days in Syria in January 2011 that confirmed beyond doubt one of Nisman’s key claims: that Hector Timerman, Kirchner’s foreign minister, disappeared during an official visit to Damascus to secretly negotiate the pact with the Iranians.

Timerman has always denied that he did any such thing, dismissing the reporter who first made the allegation in 2011 as a “pseudo-journalist”—a just-about-viable position until Ahuad came along.

According to Ahuad, one day after Timerman arrived in Damascus, he and the foreign minister were driven to a military airport near the Syrian capital. Once there, Timerman and his aides boarded a plane provided by the Syrian dictator, Bashar al-Assad, after curtly informing the ambassador that his presence was superfluous. Ahuad, angry with Timerman for having embarrassed him in front of their Syrian hosts, then returned to Damascus. Several hours later, having received no word from Timerman, he drove back to the airport.

Inside the terminal, Ahuad met a group of Syrian officials. They told him that Timerman had flown to the northern city of Aleppo for a meeting hosted by Assad, along with the Iranian foreign minister, the Syrian foreign minister, and Iran’s ambassador to Damascus. The officials added, said Ahuad, they were unaware of the reason for the meeting, and that all the arrangements had been cloaked in “absolute secrecy.”

An official account of the meeting did appear the following day, which stated that Timerman had met with Assad to discuss the strengthening of bilateral ties, “reinforced by the large presence of the Syrian community in Argentina”—a community from which, ironically, Ahuad hails. Needless to say, the presence of the Iranians was not acknowledged.

But back in Argentina, Alberto Nisman did not give up. Having been appointed in 2005 to lead the AMIA investigation by Kirchner’s predecessor, her late husband Nestor, five years later, Cristina Kirchner’s government had performed a 180-degree turn on Iran, and the AMIA investigation was becoming a nuisance. Like any good investigator, Nisman went where the evidence took him, to the point that it cost him his life—a perspective shared by the official investigation into his death, which concluded back in May that the prosecutor had been murdered, despite Kirchner’s insistence that it was a suicide.

Kirchner, Timerman and several other Argentine officials could well face treason charges as a result of Ahuad’s testimony. In the interim, Timerman’s lawyer has told investigating judge Claudio Bonadio that the former foreign minister wants to schedule a hearing where he will “clarify the facts” around the secret pact with Iran.

Given that Timerman’s lawyer implied in his letter that his client’s health is failing, perhaps there is a ghost of a reason to believe that Timerman—who has proven himself a liar time and again—wants to unburden himself. Doing so would perhaps restore a small portion of the dignity that this son of a prominent Jewish family has lost in colluding with the murderers of Argentine Jews and non-Jews. It might even give him an opportunity to get his own back on Kirchner’s thuggish lieutenants, who lampooned him as “that f— Jew” behind his back even as he was negotiating with Assad and Iran. Or it might result in yet another tissue of falsehoods.

The fact the net is now closing in upon the Argentine culprits in the AMIA story cannot be doubted. Will another two decades pass before we see the Iranian terrorists themselves in court?

Ben Cohen writes a weekly column for JNS.org on Jewish affairs and Middle Eastern politics. His writings have been published in Commentary, the New York Post, Haaretz, The Wall Street Journal and many other publications.