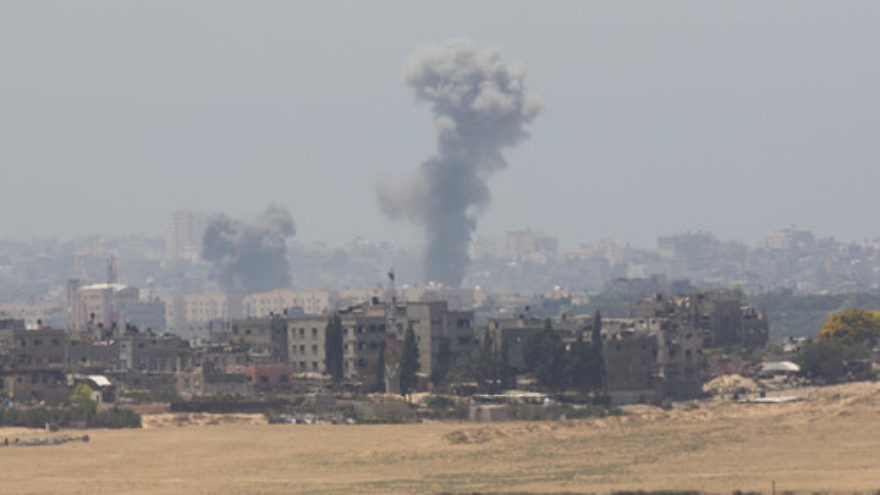 With the launch of the Israeli army’s Operation Protective Edge in Gaza, much of the public’s attention has appropriately focused on Hamas, the Palestinian terrorist group behind the June 12 abduction and murder of three Jewish teens and more recently the escalation of rocket fire on Israel. But the threats the Jewish state faces from Gaza may not be as clear-cut as they seem.

While Hamas is still extremely deadly, it has seen a weakening of its grip on the coastal enclave over the past few years, due to challenges from other Islamic terror groups and isolation from its former patrons in the Muslim world.

“Hamas has been on the brink of collapse,” Jonathan Schanzer, vice president for research at the Foundation for Defense of Democracies, told JNS.org. “It has become very isolated politically and economically.”

“It is very difficult to figure out what Hamas’s calculus is [in its current escalation with Israel],” Schanzer added. “Hamas may have nothing to lose, but on the other hand, they could have really overplayed their hand, which could lead to complete devastation of their assets.”

Since taking control of Gaza in 2007, Hamas has seen a steady decline in its support from the Palestinian people and the rise of other Islamic terrorist groups there—including its main Palestinian rival, Islamic Jihad, as well as al-Qaeda-inspired Salafi global jihadist groups.

In February, leaders of the Salafist factions known as the Al-Quds Mujaedeen Shura Council in Gaza issued a statement pledging allegiance to Islamic State in Iraq and Greater Syria (ISIS), which has made global headlines for its brutality and swift victories in the Syrian civil war and Iraq.

These Gaza-based Salafi jihadist groups have often been at odds with Hamas and have been targeted by Hamas’s internal security forces. At the same time, these groups have also been responsible for rocket fire on Israel, both from Gaza and the Sinai Peninsula. This includes rockets fired on the southern Israeli city of Eilat in January 2014.

According to the Egyptian newspaper Al-Masry Al-Youm, 15 ISIS terrorists were arrested by Egyptian security forces trying to enter Gaza from the Sinai. Eyad al-Bazam, a spokesman for Hamas, has flatly denied the reports, calling them “blatant lies” and part of an Egyptian smear campaign against Hamas.

Nevertheless, at a recent funeral for two terrorists killed in late June by the Israel Defense Forces, ISIS flags were seen wrapped over the dead body of one of the terrorists. ISIS flags were also seen during their funeral procession through Gaza.

Rafi Green, head of the Jihad and Terrorism Threat Monitor for the Middle East Media Research Institute (MEMRI), said that although ISIS “has no presence in Gaza as an organized group,” there are “quite a few adherents of radical Salafism in the [Gaza] Strip, who constitute a base of support for ISIS.”

“Radical Salafis in Gaza provide practical services to ISIS, especially moral and media support,” Green told JNS.org. “Media activists in what’s known as ‘the Jerusalemite Support’… help produce and distribute pro-ISIS propaganda and media releases. They have a very active Twitter account that has ten of thousands of followers.”

Hamas also faces challenges from other rocket-launching Palestinian terror groups such as Islamic Jihad, which has received increased funding from Iran. Aside from that growing internal threat, Hamas is increasingly isolated within the Muslim world.

For many years, Hamas relied on Iran and its partners, Syria and Hezbollah, for military and financial support. All of that changed, however, following the group’s December 2012 fallout with Iran and Syria over the Syrian civil war. Hamas then decided pursue support from Sunni powers such as Turkey, Qatar, and the Muslim Brotherhood in Egypt, all of which were on the rise at the time.

But since the July 2013 ouster of Egyptian President Mohamed Morsi, a member of the Muslim Brotherhood, Hamas has found itself in the crosshairs of Abdel Fattah El-Sisi, Egypt’s new president.

El-Sisi has severely cracked down on the Muslim Brotherhood and by extension Hamas, which had tied its fortunes closely with the Brotherhood—its parent group—when the Brotherhood briefly rose to power in Egypt in 2012.

Under El-Sisi, the Egyptian military has embarked on an aggressive campaign—with Israel’s blessing—to eliminate terrorism in the Sinai Peninsula, including destroying Hamas’s smuggling tunnels under the Egypt-Gaza border. Egypt has also kept the border crossing largely closed to regular civilian traffic.

Hamas has lost significant funds from the Egyptian closure of smuggling tunnels, which the Palestinian terror group operated for the dual purpose of generating revenue as well as smuggling rockets and other weapons.

“This time the Egyptians will not help [Hamas] out in this mess,” Schanzer told JNS.org, referring to previous Egypt-brokered ceasefire deals between Israel and Hamas such as the one that ended the November 2012 Israel-Gaza conflict.

For Israel, the rise of global jihadist groups in Gaza and Hamas’s isolation there creates a different set of problems.

“It is a question of whether it is in Israel’s interest to weaken [Hamas] further or even destroy the terror organization,” said Schanzer.

“It is clear that [Israeli Prime Minister Benjamin] Netanyahu did not want to escalate things with Hamas. With the fallout of the Arab Spring, the rise of ISIS in Iraq and Syria, and the Iranian nuclear program, this was not the right time and Hamas did not pose a strategic threat right now,” he said.

At the same time, if Hamas becomes severely weakened, Salafi jihadist groups or Islamic Jihad may use the opportunity to seize control of Gaza.

“[Israeli operations] might create a vacuum where it can give rise to other jihadi groups who would be worse than Hamas,” Schanzer said.

At this point, Netanyahu and Israeli Defense Minister Moshe Ya’alon have not indicated that completely destroying Hamas is an objective for Operation Protective Edge. Israel is instead focusing on the immediate threat of ending the rocket attacks, while also approving the call-up of as many as 40,000 reserves in case of a ground operation in Gaza.

Nevertheless, Ya’alon has said this will be a long-term operation, and that Hamas and other terror organizations “will pay a very steep price” for rocket fire on Israel.

“We are destroying arms, terrorist infrastructure, command and control systems, institutions, government buildings, terrorists’ homes, and we are killing terrorists in the organizational high command,” said the defense minister.

In the immediate future, Hamas remains the biggest game in town in Gaza for Israel, given the terror group’s tens of thousands of fighters and a substantial arsenal of rockets capable of striking Jerusalem and Tel Aviv.

“Whether this becomes an all-out war really depends on the amount of rockets fired out of Gaza,” Schanzer said. “It is up to Hamas.”

But in the long run, Hamas’s goals are shared by like-minded terrorist organizations.

“As far as intentions go, Israel is obviously an enemy for all global jihad groups,” MEMRI’s Green told JNS.org. “They all claim to be fighting in order to liberate Islam’s holy sites in Jerusalem and so on. But right now they’re focused on winning the internal battles within the Arab/Muslim world.”

—With reporting by Alina Dain Sharon