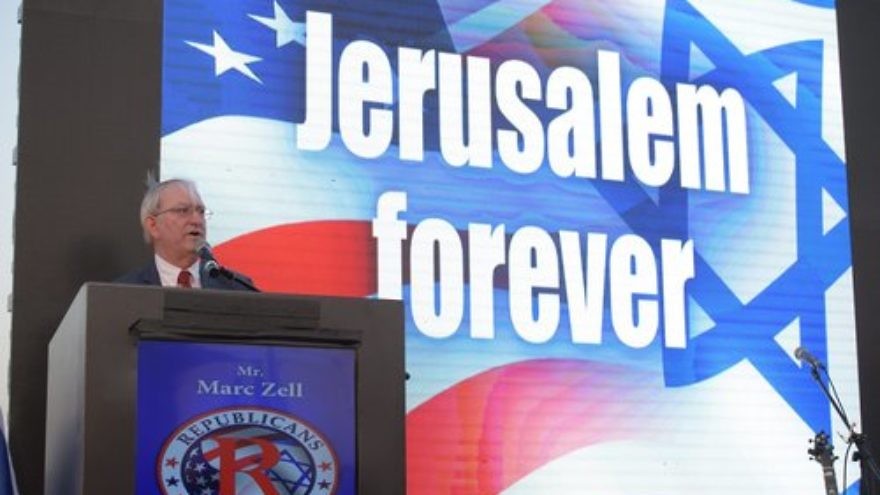 (November 2, 2016 / JNS) JERUSALEM – Democrats and Republicans have been scrambling to secure support for their respective candidates among American expatriates in Israel for months. But the two campaigns have been radically different in their budgets, strategy and the overall visibility of their ground games.

Here, the respective campaigns have been far lower key than their U.S. counterparts, with a larger focus on social media, rather than staged events, and an effort to register voters.

While exact numbers of eligible voters in Israel remain unclear, the number is significant. Republicans Overseas Israel, not officially a part of the GOP, estimates that 120,000 Americans living in Israel are registered to vote in this election.

A small but significant portion of voters those come from swing states, such as Ohio and Florida, according to Marc Zell, the organization’s co-chair.

With 7,000 to 10,000 Florida voters in Israel, “those kind of numbers can make a difference,” Zell said, especially if the Nov. 8 election is close like that of the 2000 presidential election.

“Look, the strategy is simply this, we have probably 300,000 Americans eligible to vote in Israel, we wanted to go after a chunk of those, we succeeded in getting a pretty big chunk,” he said.

Republicans Overseas Israel has opened offices in Maaleh Adumim, Modi’in, Jerusalem Ramat Gan, Raanana and elsewhere and has been canvassing for votes in many locales with large American populations.

A look back at the 2012 presidential race provides a big incentive for local Republican activists to get out the vote. While 69 percent of American Jews voted for President Barack Obama back then, 85 percent of expats living in Israel reportedly voted for Republican presidential candidate Mitt Romney, according to iVote Israel, a voter registration group.

“We got a huge amount of interest, a lot of volunteers,” Zell said. “We have campaign offices, we hold events like the one in Jerusalem last week, referring to the GOP rally in the Old City attended by several hundred people. Donald Trump and Mike Pence addressed the crowd via video. Another event was held Tuesday evening on a rooftop in Tel Aviv.

While Republicans Overseas has hosted events and registered voters, many Americans here say they have not run across much in the way of canvasing by either party.

Sarah, a New Yorker now living in Jerusalem, recalled seeing a “guy with a table in front of the shuk,” Jerusalem’s outdoor market, pushing people to register to vote, but not much else.

According to media reports, the Republican campaign here has received significant funding compared to previous election cycles, although the sources and extent remain unclear. Zell’s organization has hired a number of Israeli strategists to help spearhead local efforts, which include targeting second and third generation American Israelis.

On the other side, Democrats Abroad, the local branch of the Democratic party’s international arm, are “doing everything on a totally voluntary basis,” said Hillel Schenker, the group’s co-chair.

The organization is currently without a leader and operating under control of a committee, which is coordinating volunteers, Schenker said. Much of his party’s focus is on its ground game in swing states in the U.S., not on going after citizens living abroad.

Tally Zingher, the organization’s unofficial spokeswoman, was more upbeat, telling JNS.org that the Democrats were doing “a ton of stuff,” including the registration of a “couple of thousand” voters. And while party activists handed out literature and a hosted debate-watching event, the focus has shifted to phone banking, she said.

In recent days, volunteers have called potential voters, according to one Democrat on the volunteer email list.

The lack of street-level campaigning is bore out by observers such as Yitz, a Jerusalem resident originally from New England, who said he “never saw anything about Clinton here. Seems their ground game was not very good, lots of right-wingers here seem enthusiastic about Trump.”

Reuven Ashenberg is the local campaign coordinator in Bet Shemesh, a bedroom community 40 minutes outside of Jerusalem favored by Orthodox Jews from the U.S. His campaign has canvassed outside of local supermarkets on several occasions.

“Basically, it’s get out the vote, helping people sign up [to vote] and follow up with them if they have questions and reminding people to vote come Election Day,” he said.

Some observers have speculated that the Republican campaign has been less focused on recruiting local voters than on creating an impression that Israelis strongly back Trump to court the heavily pro-Israeli evangelical demographic in the U.S.

Asked about this theory, Zell said he was “cognizant of this fact,” adding that the recent Jerusalem rally was “primarily aimed at energizing evangelical voters in the United States to support Jerusalem.”

Despite “sending a message” to the evangelicals, Zell was adamant that “everything that we do is aimed at getting, first and foremost, our own citizens here registered and voting Republican.”

Asked to contrast his campaign with that of his political rivals, Zell denied the existence of an organized Democratic effort in Israel.

“Their organization has collapsed,” he said. Without one person in the top spot, “there is no organization in Israel…There may be people running around doing things for Hillary Clinton, but there is no Democrats Abroad operating.”

As proof, Zell pointed to the involvement of Democrats Abroad representatives from Europe involved in the campaign, pointing to the presence of activists targeting Israeli voters from Avaaz, a campaign funded by billionaire anti-Israel promoter George Soros.

Zingher countered Zell as “absolutely incorrect” that her organization is defunct.

“I’m not surprised because of so many of the non-truths that come out of the campaign,” she said. “He certainly would like that message to come across…We have a team and it’s never been just one person, and we will again have new elections next year [according to] the bylaws of the organization…To say that there are no Democrats in Israel is laughable.”