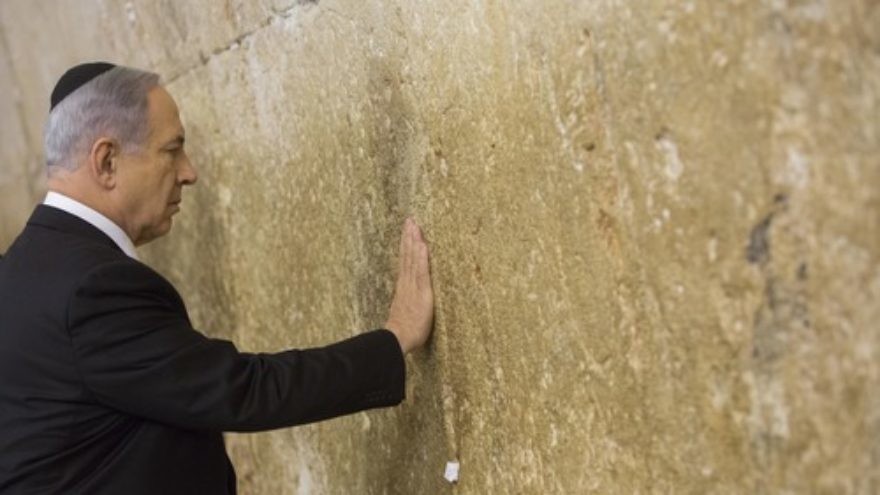 On Wednesday afternoon in Jerusalem, JNS.org caught up with Walters and a number of other Israelis who were fresh off casting a ballot the day before. Given that in the city of Jerusalem, the gap between Likud (24 percent of the vote) and Zionist Union (10 percent) was even more pronounced than the disparity between those parties in the rest of the country, it wasn’t surprising to see voters in the Israeli capital’s Old City celebrate the way Walters did.

Down at the Western Wall, tourists and citizens alike waited good-naturedly to catch a glimpse of the prime minister himself, who was scheduled to make a post-election visit to the holy site. After Likud defied pre-election polls in which the party trailed the socioeconomically focused Zionist Union, security was uppermost in the minds of Netanyahu supporters after their candidate’s decisive comeback victory.

“Zeh Bibi!” exclaims Aaron Selam, meaning “That’s Bibi!” in Hebrew. Selam, who mans a table selling yarmulkes on the landing overlooking the Western Wall courtyard, says, “Bitachon (security) is the most important thing. We know he won’t give away our land.”

“Sweet Bibi!” says a clearly delighted Sarah Eliav. “With him you get security and a good economy. He is the prime minister, with honor.”

Voting is just one way that Yarden Jira of Tel Aviv invests in her country. “I voted for Bibi because I have confidence in him,” says the 21-year-old Israel Defense Forces soldier, who was visiting the Western Wall with her fellow soldiers. “I believe he will make the right decisions.”

Spending three years in the Israeli army has a way of changing one’s views, says 27-year-old Roy Levi of Jerusalem. “After fighting in the second Lebanese war, I stopped thinking of us as left and right but just Israelis. I fought for this country alongside soldiers all beliefs and I learned that we are all brothers,” Levi says.

But cross the plaza from the ancient stones of the Old City and go down 23 stone steps to Mamilla Mall, where Cyndi Lauper classics waft into the various stores, and you’ll hear a somewhat different reaction to the election. “Chetzi chetzi (half and half)” is the way 33-year-old Anat Kaufman describes her reaction to the results. “It seems like the right’s side is up now. But we don’t know what is coming next,” she says.

For Jonathan Levinstein of Tel Aviv, Kulanu party leader Moshe Kahlon “was the lesser of the evils.” His reasoning: “Security-wise the candidates were all saying pretty much the same thing. So I wanted to pick someone who would pay attention to the economy.” Levinstein’s hope is that Kahlon, whose party won 10 Knesset seats, will emerge as the new government’s Minister of Finance.

Twenty-seven-year-old Anna Brockport of Jerusalem, who voted for the far-left Meretz, says, “I’m super super disappointed. They stand for peace and better relations with the world community. But now it’s back to business as usual.”

Yahly Kahanoff, a seventh-generation Israeli who voted for Zionist Union, says he fears the new government will refuse to tackle the problem of 4 million Arabs living on Israeli land. “I’m not concerned about security,” he says. “But Netanyahu ran a campaign on fear of Iran and the Arabs, and it worked.”

Yet Likud’s victory likely shows that security was a chief concern concern in the ballot box.

“Security, obviously,” says Michael Hessler on his way out of ulpan (Hebrew-language immersion) class in Maale Adumim on Tuesday, when asked for the issue he prioritized as a voter. Six years after making aliyah from Cleveland, Hessler says he believes the “real issue” is the danger of “giving away Israeli land.”

Like Levinstein, Hessler is excited that the new coalition could include Kahlon.

“It’s the best possible combination: Bibi on top of security and, in the new coalition, having greater freedom to negotiate from strength with the U.S. and others. And Kahlon, who’s already known as a monopoly buster, making great strides in affordability issues, particularly housing. I expect him to be given free reign to build our economy and help young people be able to afford to get ahead,” says Hessler.

Reuven Katz, who made aliyah from California 19 years ago, says he never felt his vote in the U.S. packed the wallop it does in Israel.

“Here, it’s such a small country that I feel my vote really counts,” Katz says at the top of the stairs leading to the Western Wall. “I certainly never felt that way in the States. And, with so much at stake here now, I think that with each vote we are able to create change.”