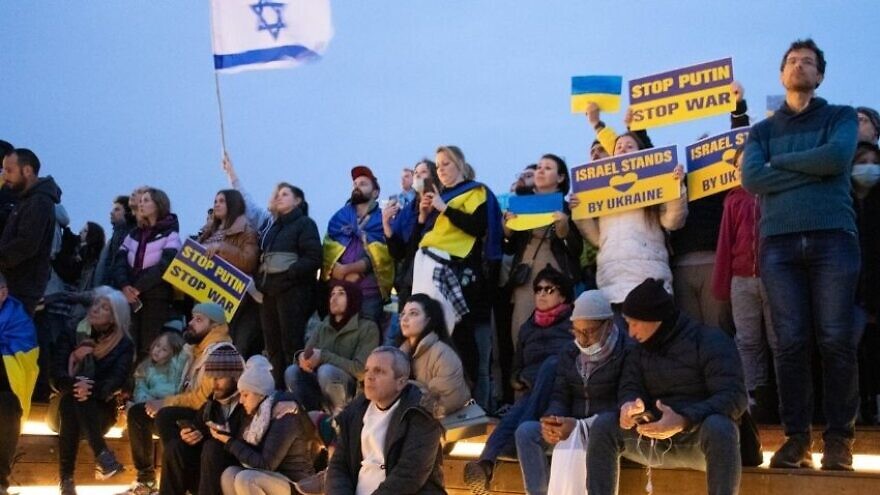 (March 21, 2022 / JNS) In his video address to the Israeli Knesset on Sunday evening, Ukrainian President Volodymyr Zelensky thanked Israel for its support but criticized Israel for not taking a tougher stance against Russia. However, it was his comparison of Russia’s invasion of Ukraine to the Holocaust that roused the ire of Israeli lawmakers on both sides of the aisle.

The Kremlin is “using the terminology of the Nazi Party,” said Zelensky. “In Russia, they’re using these same words—‘final solution’—only now it’s directed at us, the Ukrainian problem.”

Hendel of the New Hope Party, who serves as communications minister, said that while he admires Zelensky, “It’s impossible to rewrite the terrible history of the Holocaust.” If the speech had been made in more normal times, said Steinitz of Likud, people “would say that it borders on Holocaust denial.”

Rothman of the Religious Zionism party took issue with Zelensky’s claim that Ukrainians had helped Jews during the Holocaust.

“The Ukrainians made their choice 80 years ago. We saved Jews and therefore there are among us ‘Righteous Among the Nations,’ ” Zelensky said in his speech.

Referring to the 1.5 million Jews killed by the Nazis in Ukraine, often with the help of local collaborators, Rothman tweeted: “Zelensky asked us to behave toward the Ukrainians as they behaved toward us 80 years ago. Sorry, it seems to me we’ll be forced to reject his request.”

‘A tragedy for Ukrainians, for Jews, for Europe, for the world’

Zelensky’s tone—defiant, emotional, reproving—was consistent with his addresses to other national bodies, each speech tailored to strike a national nerve. Before the British parliament, for example, he talked of World War II and Shakespeare. Before the U.S. Congress, it was Pearl Harbor and 9/11. He received standing ovations in both cases. But despite being Jewish, Zelensky was less successful in his address to the Knesset.

“I want you to think about this date. About the 24th of February. About the beginning of Russia’s invasion of Ukraine. This day, Feb. 24, has twice gone down in history, and both times as a tragedy. A tragedy for Ukrainians, for Jews, for Europe, for the world,” he said.

“On Feb. 24 in 1920, the National Socialist Workers’ Party of Germany was founded  … 102 years later, on Feb. 24, a criminal order was issued to launch a full-scale Russian invasion of Ukraine.

He also underscored how Russian missiles had “hit Kyiv, Babyn Yar,” as well as the city of Uman, the burial place of Rabbi Nachman of Bratslav, a popular pilgrimage site for Chassidic Jews.

Throughout his address, Zelensky drew comparisons between Ukraine and Israel, noting that while the two states exist “under absolutely different conditions,” the threat they face from their enemies is one and the same: “The total destruction of our people, our state, our culture, even our names.” Quoting Israel’s fourth prime minister, Golda Meir, who was born in Kyiv, he said: “We want to live but our neighbors want to see us dead. It does not give us much room for compromise.”

Zelensky concluded his speech by tacitly criticizing Israel for not providing more entry permits for refugees. Israel had initially limited the number of Ukrainian refugees to 25,000; that included 20,000 who were already residing illegally in the country. Under public and political pressure, Israel increased the number to those who had a family member already in Israel. More than 10,000 Ukrainian refugees have since entered the country.

He also chastised Israel for not providing Ukraine with more military aid, such as the Iron Dome anti-missile system, and for not pressuring Russian businesses. “It’s up to you to give answers to these questions, and afterwards, to live with those answers,” he said.

Sensing from the post-speech reaction that he may have gone too far, Zelensky, in a video post to his social media feed later on Sunday, softened his comments, saying, “Of course, Israel has its interests, strategy to protect its citizens. We understand all of it.”

“The prime minister of Israel, Mr. [Naftali] Bennett, is trying to find a way of holding talks. And we are grateful for this. We are grateful for his efforts, so that sooner or later, we will begin to have talks with Russia, possibly in Jerusalem,” he added.

However, Zelensky did not address the criticism of his Holocaust comparisons. 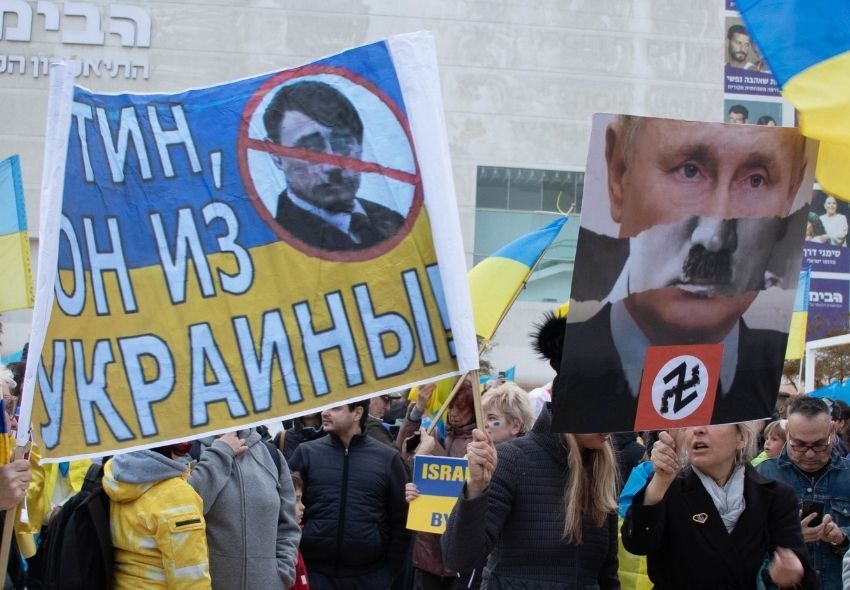 ‘Israel is doing what it’s able to do’

The Ukrainian prime minister was not alone in making such comparisons. His speech, which was televised, was also projected onto Tel Aviv’s Habima Theater, the site of a pro-Ukraine protest attended by approximately a thousand people, according to estimates. At the demonstration, many banners and signs equated Russian President Vladimir Putin with Nazi leader Adolph Hitler.

However, not all those at the protest agreed with such comparisons. One demonstrator, Vyktor, told JNS that they were off base.

“Then, it was the destruction of the Jewish people. Here, no. Putin isn’t against the Ukrainians. Putin is against an independent Ukrainian state that left the Soviet Union,” he said. “I understand what Zelensky was trying to do. He wanted to appeal to the nation’s emotions. But it was hitting below the belt.”

Vyktor, who was born in Ukraine and moved to Israel 30 years ago, said he was at the demonstration to support Ukraine only because Russia was the aggressor. “If it had been Ukraine which attacked Russia, I would be here supporting Russia,” he said.

He also took issue with Zelensky’s demand for weapons. Israel is in a “delicate position” given that Russia has installed itself in Syria, he said. Russians could “close down the skies” over Syria, something which he said would create problems for Israel, which seeks to prevent Iran from gaining a foothold in the area.

“Zelensky knows this full well. Yet still, he says Israel must give him weapons. It’s not fair. Israel is donating a huge amount of humanitarian aid to Ukraine. It’s building a field hospital,” said Vyktor.

Most of those JNS spoke to at the demonstration had a personal stake in the war’s outcome.

Kiril, who came to Israel five years ago from Konotop, a city about 30 kilometers (18 miles) from the Russian border, told JNS that his mother, who is 71, is trapped there. 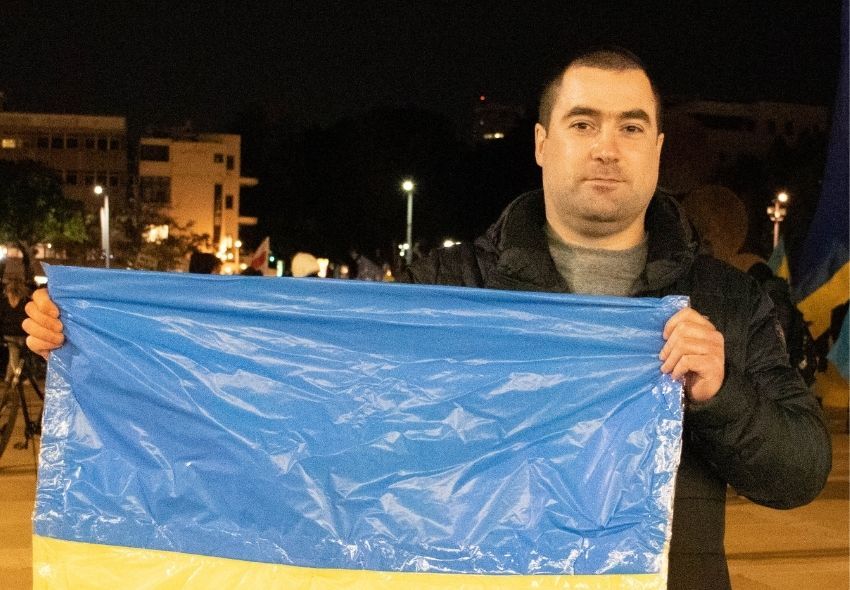 Kiril, who immigrated to Israel from Konotop, Ukraine, five years ago, participates in a pro-Ukraine rally in Tel Aviv on March 20, 2022. Photo by David Isaac.

“The situation is very difficult,” he said. “Already for two weeks, people are without electricity, without gas, without food, without water. It’s minus-eight degrees Celsius outside.”

“It’s impossible to sit quietly. Whoever does so agrees with Putin. That’s how I see it,” he said, adding that he sends contributions to Ukraine’s military and to his friends in the country.

Lena and Paulina, cousins who left Ukraine for Israel 28 years ago, came to the protest because, they said, Ukraine was a beautiful country with lovely people. They had grown up in Kherson, a city that has fallen to the Russians and now suffers acute shortages. They said they had many friends still in the country.

Vera, 26, who was helping hold up a large Ukrainian flag, made aliyah to Israel three years ago with her parents and younger sister. She said there were family members who had remained behind but who had fortunately managed to flee to Germany. She grew up in Kharkiv.

“It’s hard to call it a city anymore because they destroyed everything there,” she said. “It’s my history there. My childhood.”

Asked whether she thought Israel was doing enough for Ukraine, she said, “Israel is doing what it’s able to do.” 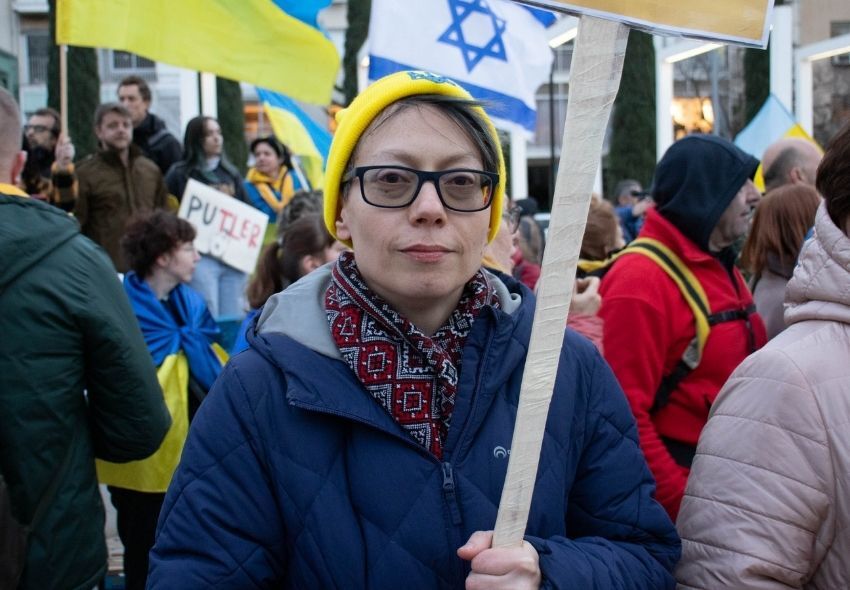 Anna came to support Ukraine at a rally in Tel Aviv, even though she hails from Moscow, March 20, 2022. Photo by David Isaac.

Anna came to support Ukraine even though she hails from Moscow. “In Russia, a segment does understand and support Ukraine, but they’re a little scared of going out and protesting. There are many, many arrests,” she said.

As to whether Israel should do more, Anna agreed that Israel has its own considerations, noting Russia’s presence in Syria. “If we provided weapons and the Iron Dome to Ukraine, it could create problems for us,” she said prior to Zelensky’s speech.

Stanislav, Rina and their son Alex, all of whom made aliyah in 1991, took Zelensky’s side. Stanislav carried a sign that read, “Whose side is Israel on?”

“It’s like Zelensky said, you can’t mediate between good and evil,” Stanislav told JNS after the Ukrainian president’s talk. “Our state must choose the good side. The side of peace and of all Western countries. We aren’t doing enough because many countries are aiding Ukraine much more than we are and that puts us in a very uncomfortable position. We could help much more, especially on the military side. We should give them defensive weapons.”

Rina said that her mother, 84, was somewhere in the hard-hit city of Mariupol.

“A hostage for 30 days, she doesn’t have food, gas, electricity. We haven’t been in touch with her since the third of March. All the communications are down because the Russians bombed the cellular network,” she said. “They’re not allowing any humanitarian corridors out of the city, so no evacuation is possible.”

Before the war, Rina said she begged her mother to come to Israel by “whatever means necessary,” but that her mother, “like everyone else in Mariupol,” simply had not believed the Russians would invade. “They said, ‘If Putin said he’s not going to do it, then he’s not.’ They insisted on staying there,” she said.

Responding to reports that Putin is ready to talk to Zelensky, Rina said, “You can’t believe anything Putin’s saying. He never kept his promises. The same goes for what he says now.” 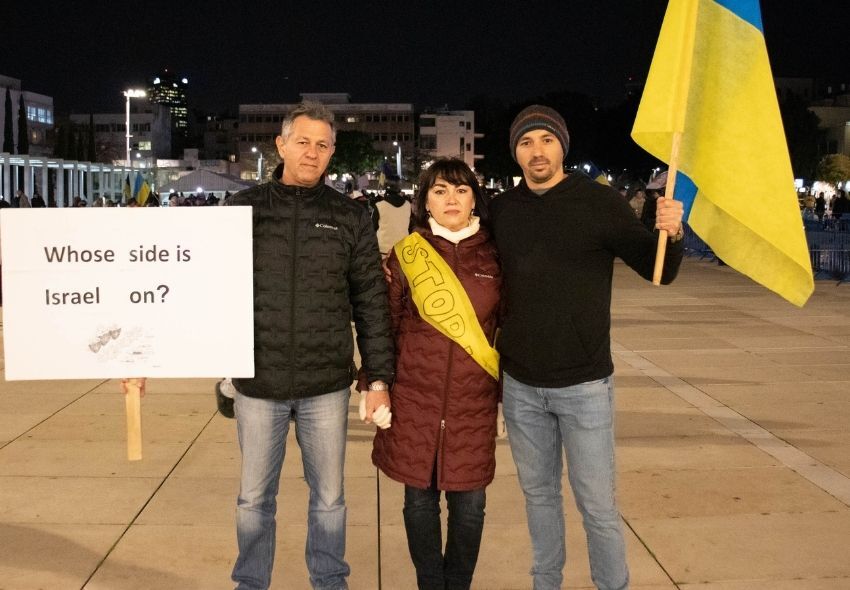 Stanislav, Rina and their son Alex—Ukrainians who made aliyah—attend a protest in Tel Aviv, asking for Israel to do more to help their native country, March 20, 2022. Photo by David Isaac.
Republish this article in your newspaper or website