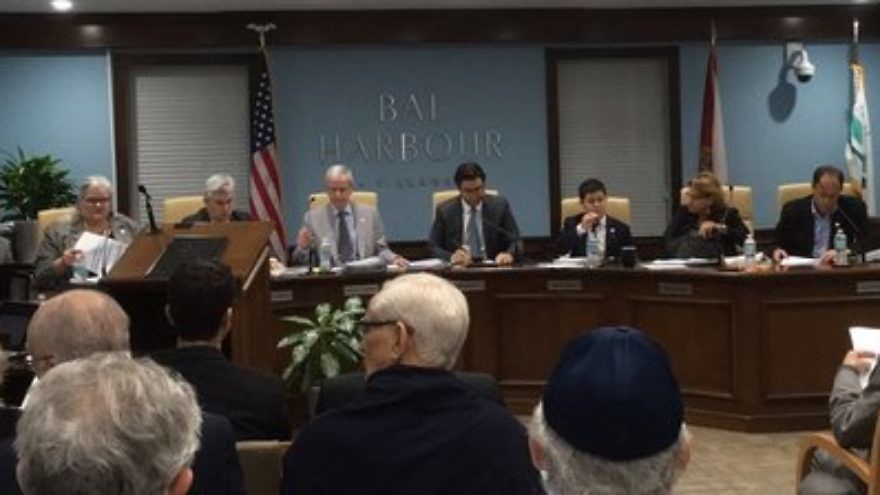 (November 22, 2017 / JNS) Bal Harbour, Fla., is best known as a popular destination for snowbirds. With a population ranging from 2,500-8,000, depending on the time of the year, it’s hard to believe that this small oceanside village, 30 minutes north of Miami, is now a national leader in combating anti-Semitism.

On Nov. 21 in front of a packed room, the Village Council unanimously passed a measure that adopted the State Department’s definition of anti-Semitism—creating a village code that will permit law enforcement to consider anti-Semitism as a “motivation for criminal offenses in order to ensure the safety and wellbeing of its Jewish community.”

This is not the first resolution Bal Harbour has issued against anti-Semitism. In 2015, the Florida municipality passed a first-of-its-kind measure “prohibiting the Village from entering into agreements with businesses that boycott a person or entity based in or doing business with an Open Trade Jurisdiction such as Israel, and requiring businesses to pledge not to engage in such a boycott during agreements with the Village.”

“A little less than two years ago, we became the first municipality in the country to pass an anti-boycott ordinance,” explained Bal Harbour Mayor Gabriel Groisman. “Because of our leadership on this issue, over three dozen cities, estimated, across the country have passed similar ordinances.”

Groisman, who introduced what is unofficially referred to as the “Anti-Semitism Definition Act,” told the Haym Salomon Center that the issue of growing anti-Semitism is too important to wait on federal lawmakers to take action.

“As a local municipality we can do things more efficiently and faster than a state or federal bureaucracy,” he said. “Anti-Semitism in our country is growing at an alarming rate. What is right can’t wait for state and federal politicians to act. That is why I have proposed this measure and hope other towns and cities will follow our lead.”

“We may be a small municipality, but we now represent an important voice,” added Groisman. “This fight is significant not only for the Jewish community but for the entire American community at large, as hate breeds hate, and we cannot stand still and allow intolerance to threaten our society.”

The State Department’s definition of anti-Semitism acknowledges “the ways in which anti-Semitism manifests itself with regard to the state of Israel,” including through demonization, delegitimization and the application of double standards.

Before the Nov. 21 vote, the Bal Harbour Village Council received letters of support for the measure from two Republican members of Congress from Florida, Reps. Ileana Ros-Lehtinen and Carlos Curbelo.

“The increased presence of anti-Semitism around the world has caused Jewish communities everywhere to be on high alert,” Curbelo wrote. “It is time we take a tougher stand on anti-Semitism at all levels of government. I am proud that Florida’s own Bal Harbour Village will play a leading role in this critical effort.”

Sara Gold Rafel, the Southeast U.S. director for the Israel advocacy group StandWithUs, said the Bal Harbour legislation “will clarify what Anti-Semitism is and thereby help combat it. The bill doesn’t regulate anti-Semitic speech, or any form of speech. It relates only to unprotected behavior, such as vandalism. It is definitely a crucial step in the right direction.”

According to village rules, a second reading of the legislation is scheduled for Dec. 13. The measure is expected to become law at that time.

“With the passage of this ordinance in December, we will be the first government body in the nation to codify the proper definition for anti-Semitism, reflecting the realities of the day,” Groisman said. “We hope that cities and states across the country will follow, and our nation will continue to reject all forms of hate and discrimination.”