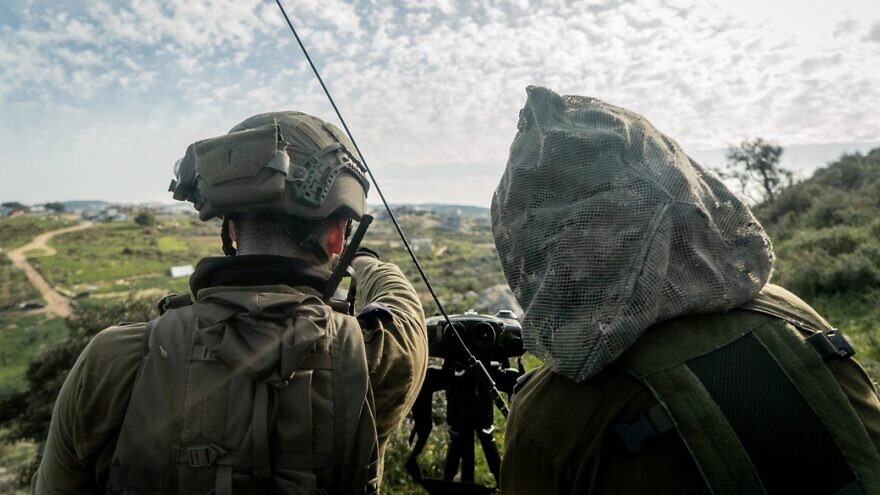 (November 29, 2021 / JNS) The Israel Defense Forces are developing upgraded intelligence and firepower strike capabilities, and is drilling these new abilities on a regular basis. At the same time, Israeli intelligence sources acknowledge that Hezbollah has morphed from a guerilla-terror organization into an organized terror army.

These developments were clearly on display this month, during an extensive war drill conducted by the IDF’s 36th Armored Division, a multi-arena division capable of maneuvering into enemy territory and attacking targets in a range of ways.

“We are preparing ourselves in better ways. We hope we don’t have to get there,”  said Deputy Intelligence Officer for the 36th Armored Division Maj. A (full name withheld), during the drill.

When assessing Hezbollah, Maj. A stated that the Iranian-backed Shi’ite group has learned from its experience in Syria’s battlefield how to go on the offensive.

As opposed to only trying to target IDF patrols with IEDs, anti-tank missiles and other guerilla tactics, Hezbollah of 2021 is focused on mobilizing forces into Israeli territory and employing tactical lessons it has learned from its partners in Syria since 2011.

“They will look to achieve a very big success early on in a conflict or a serious ‘success’ against the [Israeli] civilian front,” he cautioned. This could mean attacking an Israeli village near the Lebanese border and holding families hostage, exploiting Israel’s heightened sensitivity to the welfare of its civilians.

Hezbollah will “look to achieve its objective early on, allow the media coverage to go viral, and after that, it doesn’t care what happens in the rest of the war. It will have its picture—Israelis embarrassed on the world stage,” the intelligence officer said, providing an insight into Hezbollah’s strategy.

Drawing on its experience in Syria, Hezbollah has spent the past decade planning attacks into the Galilee, deploying thousands of armed operatives “the second the war starts.” The IDF’s destruction of cross-border Hezbollah tunnels in 2018-19 put a dent in those plans, though Hezbollah is planning new overland attacks and collecting intelligence on the IDF’s day-to-day activities as part of its “early achievement” strategy.

When it comes to Hezbollah’s large projectile arsenal, estimated at 140,000-plus, the organization understands that rockets form a “very practical weapon” when fired from civilian areas at civilian areas, said Maj. A.

It has closely been studying Hamas’s rocket attacks against Israel and “trying to understand what the best way to challenge us is in the next conflict,” he added.

Hezbollah also has some 100,000 mortars deployed on the border, aimed at villages and frontline IDF posts within a 10-kilometer radius. “This is a rate of fire we are not used to down south,” said the officer. 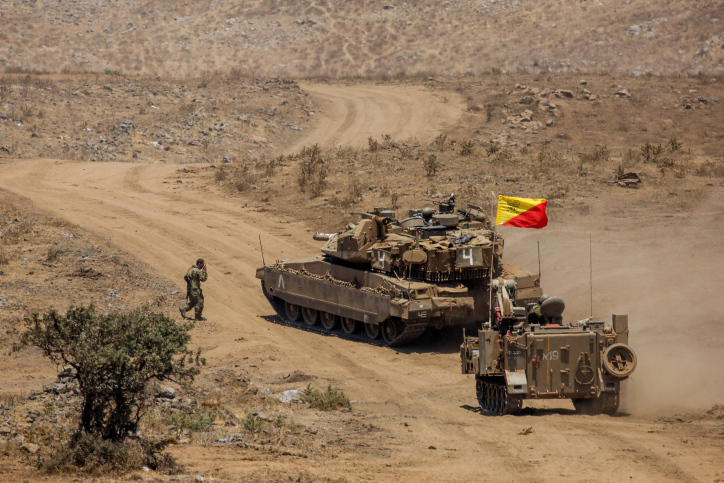 Israeli soldiers during a drill near the Israeli-Syrian border in the Golan Heights, on Aug. 4, 2020. Photo by David Cohen/Flash90.

‘The strength of the urban system’

In light of this challenge, the IDF has not been resting on its laurels. In addition to developing unprecedented airpower strike capabilities—based on unleashing thousands of munitions every 24 hours—the Israeli military is planning its next ground offensive to be nothing like past operations and wars.

A core part of this change is the ability to gather the most precise intelligence in real time and send it to just the right company, battalion, brigade and division in the field, enabling the rapid, surgical destruction of enemy targets and minimal harm to noncombatants, explained Maj. A.

With Hezbollah deeply embedded in the Shi’ite civilian population of Southern Lebanese villages, coupled with its fortifications and posts in those villages, the IDF’s dependence on rapid, reliable intelligence is more important than ever.

The goal, said Maj. A, is for maneuvering forces to be able to see the enemy, tell it apart from noncombatants, and be precise and lethal all at the same time.

Much of the intelligence picture is “under the surface, in more ways than one,” said Maj. A. Hezbollah is deployed both in Lebanon and in Syria, backed by the Iranians. The Islamic Republic is building a pipeline of munitions that travels from Iran into Iraq, and ends up in Syria and Lebanon, impacting the entire Middle East.

Hezbollah has amassed a drone fleet for intelligence and attack capabilities they can use against both Israeli civilians and the IDF.

“When you build a capability you believe in, this also makes you more ambitious. You develop it by yourself, see it succeed—and this gives you more nerve,” Maj. A. said, providing a glimpse into Hezbollah’s mindset.

Using schools, mosques and hospitals is a core part of Hezbollah’s modus operandi, as well as concealing itself with mass human-shielding tactics to make it harder for the IDF to respond.

Hezbollah looks “ahead of time at the terrain where it thinks we will enter certain areas from and make use of that terrain. It will set up observation posts in high access points. It will take anti-tank missiles … Russian products and places them in specific vantage points. It builds underground fortifications within the center of urban areas, next to civilian sites,” said Maj. A. “That’s the strength of the urban system we maneuver in, and the battleground is a civilian battleground whether we like it or not. That’s the challenge that makes us have to be precise.”

Hezbollah’s capabilities also include making use of the electromagnetic spectrum for jamming and for intelligence collection.

‘A war between two ideologies’

In light of the above, the IDF General Staff has instructed the military to build the ability to flow relevant intelligence directly down to the maneuvering units in a fast, accurate manner. Otherwise, the officer said, the intelligence will simply be irrelevant or will not enable effective action.

The division-wide exercise tests just this ability. End-to-end intelligence was streamed to the division’s brigades, including through the use of a new intelligence center in central Israel that sifts through massive quantities of data and highlights relevant insights for those in the field.

Signals intelligence, human intelligence, visual intelligence—all are fused into a big picture of the combat arena, and teams put it together like a jigsaw puzzle into a relevant “product.” This then turns into “targeting packages” that are sent with the press of a button” to the ground forces.

“This allows us to be more relevant against the enemy and more lethal. But more importantly, it allows us to avoid innocent casualties,” said the source.

The exercise saw units examine terrain, enemy activity in civilian infrastructure and then initiate a full process of preparing strikes for the battlefield.

Many of these capabilities rely on new advances in digital combat capabilities and intelligence-gathering means. Asking the right questions and getting the relevant answers to those who need it in the line of fire is critical, said Maj. A, describing a shift towards “intelligence-oriented warfare.”

“We’re interested in peace, in the status quo,” he said, adding that he assessed that Hezbollah is not interested in a conflict right now either. However, the history of this troubled region has already demonstrated that this is no guarantee that one won’t erupt suddenly anyway.

The fact that Hezbollah has been seeking to develop precision-guided missiles, for example, is an explosive red line that Israel has said it will enforce. If Israel is forced to take preemptive action, that could form a trigger for a wider conflict.

Similarly, Iran’s nuclear program continues to lurk in the background as a potential trigger point for regional conflict despite Israel’s obvious preference for the status quo.

If Iran orders Hezbollah chief Hassan Nasrallah to act, he will most likely do so since Iran is the source of funding leading to Hezbollah’s force build-up, and Iran is the party telling Hezbollah what to do in Syria.

“Nasrallah is a very religious man and will follow what the [Iranian] supreme leaders tell him,” said Maj. A.

Israel is warier these days of attempting to predict Nasrallah’s precise future moves after recent years have shown that he is more than capable of unexpected action, added to the very different cultural mentality that guides his worldview compared to the West.

The 36th Division’s drill was joined by the IDF’s Golani Brigade. During the drill, Col. Barak Hiram, Brigade Commander, stated: “The challenge isn’t to win a battle against several Hezbollah fighters; we know how to do that very well. Western armies know how to do that. The main challenge is to win the entire war—and to stay humane. To win and to stay with our morals.”

He pointed out that an Israel-Hezbollah war is not only an armed conflict but a war between two ideologies, with Israel at the forefront of Western modern democracies confronting Islamic fundamentalist ideologies.

“If we win the battle but lose the war because we become one of them; this is victory for their morals,” he said, explaining just how critical it was for the IDF to strike the right balance between combat effectiveness and sticking to its own rules of engagement.

“In any escalation entering Lebanon, we very much will put the focus on how to kill as many Hezbollah combatants as possible and destroy military infrastructure without harming the civilian population,” he added.

During the 2006 Second Lebanon War, in which Hiram was injured, the Israeli government decided not to move forward into Lebanon, creating a static war in which the IDF held ground that it captured and stopped moving ahead.

“I think that most of our plans for the next time will be much more active, including maneuvering further on, which will take the Hezbollah organization to different dilemmas that it did not have in 2006,” he said.

Asked by JNS whether this meant an IDF maneuver into Beirut, Hiram stated that no one knows for sure how wars end.

“We are here to stay for good. Lebanon is here to stay,” said Hiram. “We are willing and hoping that one day, we’ll be able to have peace with the Lebanese state that is on our northern border.