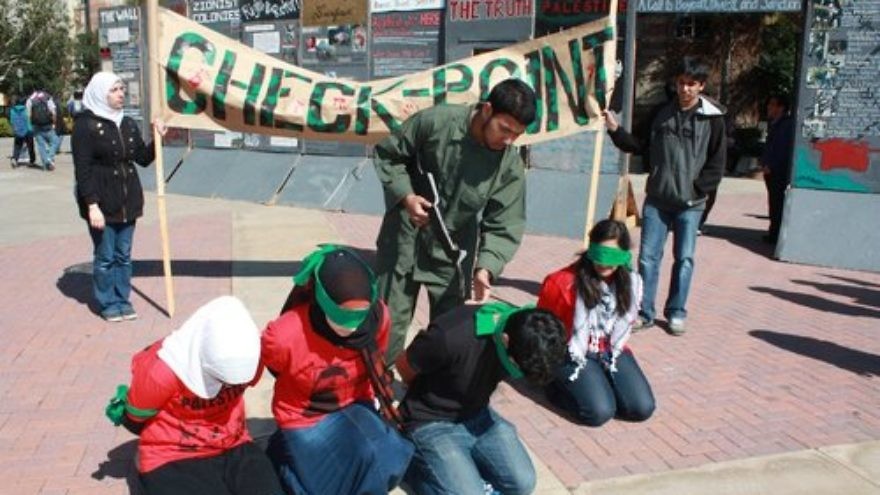 A mock Israeli checkpoint set up during “Israeli Apartheid Week” in May 2010 on the campus of University of California, Los Angeles. Credit: AMCHA Initiative.
Republish this article
1005 WORDS
Spread the word.
Help JNS grow!
Share now:

The organization borrows its name from the Hanukkah story’s heroes, and its founder is one of America’s highest-profile Jewish philanthropists. Yet as dozens of national Jewish nonprofits devote resources to fighting anti-Zionism and anti-Semitism on college campuses, the Maccabee Task Force (MTF) says it isn’t concerned about getting “credit” for pro-Israel victories.

In July 2015, a Brandeis University survey found that nearly 75 percent of North American Jewish college students reported experiencing some level of anti-Semitism. The same year, with funding from business magnate and philanthropist Sheldon Adelson, MTF was launched with the stated purpose of giving students “strategies and resources” to counter the BDS movement.

While Adelson’s name recognition brought MTF the expected media attention, the organization has kept an intentionally low profile and lets the college students lead the way, MTF Director David Brog, the founding executive director and a current board member of Christians United for Israel, tells JNS.org.

“What we found quickly is that it is best to work behind the scenes, and let the students on the frontlines and the pro-Israel professionals who actually live on the campus lead the way,” Brog says. “If you let them take credit and responsibility for what you do, then they welcome the help and together we can come up with really effective plans.”

“They (MTF) understand that only students fully understand the intricacies of campus activism,” says Rabbi Aaron Lerner, executive director of Hillel at University of California, Los Angeles (UCLA). “I keep a growing list of organizations who claim to be doing anti-BDS work on campus. Oddly, only a small percentage of them work directly with students.”

“We sat with [students and campus professionals] and came up with an action plan,” Brog says. “This had two parts. We asked, ‘What would you like to do at this campus to oppose BDS and proactively support Israel? And assume money is no object?’ And they had a bunch of ideas. As long as the ideas made sense to us, even if we were skeptical, we wanted to experiment. We said, ‘We will fund the plan, you will execute it, and you will get all the credit for what you do.’”

MTF developed action plans based on a combination of the best ideas from each campus.

“This year, we expanded that model to 20 campuses,” says Brog.

Inna Grant, a sophomore at Cornell University, says it is frustrating for Jewish students “when our events, especially ones that aren’t political at all, are protested and when lies are targeted at Israel and Jews in general.”

MTF, according to Grant, “stood out from other Jewish/pro-Israel organizations for their commitment to hands-on advocacy, educating students and engaging the wider campus community, including groups and student leaders not necessarily supportive of Israel.”

Grant praises an MTF trip to Israel that “allowed for student leaders from all different walks of life on campus—all with different, and sometimes even negative, perspectives on Israel—to go to Israel and spend 10 days there…and genuinely get an in-depth crash course on the conflict.”

What campus professionals are saying

Rabbi Yehuda Sarna, executive director of the Bronfman Center for Jewish Student Life at New York University, calls his campus’s environment for Jewish and pro-Israel students “sunny with occasional thunderstorms….There have been, on occasion, professors who use their bully pulpit inappropriately and student-led campaigns promoting BDS.”

“Rather than neutralizing threats,” Sarna says, “MTF enabled us to pursue unique opportunities, particularly in building bridges between the pro-Israel community and dozens of other clubs at NYU with whom a dialogue had never existed.”

Noa Shemer, the Jewish Agency/Hillel Israel Fellow who serves campuses throughout California’s Silicon Valley, says there are “a lot of very vocal anti-Zionists and their rhetoric can quickly move into blatant anti-Semitism,” such as on the San Jose State University campus, noting incidences of swastika graffiti and the passage of an anti-Israel divestment resolution in 2015.

Due to MTF’s efforts, Shemer says, “we got to take two trips of San Jose State students to Israel so far, host a high-tech job fair with 500 student attendees, and a weeklong Yom Haatzmaut (Israeli Independence Day) celebration with over 1,000 attendees. Thanks to MTF, we have been able to show Israel in a different light on campus and change the conversation to something more positive and factual.”

Lerner says his campus community is “deeply concerned that BDS supporters at UCLA and on other campuses nationwide consistently try to defame student leaders who take pro-Israel or even neutral positions.” He notes the case of Indian-American law student Milan Chatterjee, a former student president who left the school in 2016 due to a “hostile and unsafe campus climate” fostered by BDS groups.

MTF, says Lerner, has addressed the threat by taking “the time to come to campus to meet directly with students. They heard their best ideas, and said, ‘How can we help?’ They have enabled our students to bring important speakers and programs to campus which would not exist without MTF’s partnership.”

Research has proven that campus anti-Zionism leads to anti-Semitism, which is seen in verbal and physical assaults, hostile professors, “Israeli Apartheid Week” demonstrations, and other forms of expressed hatred. But the biggest hurdle, Brog says, is combating “efforts to demonize and delegitimize the state of Israel,” a problem that “preceded BDS and will outlive BDS.”

“If we are able to pass legislation in each [U.S.] state, and get colleges and universities to say that BDS crosses a line, that would be great,” he says. “But you better believe that efforts to delegitimize and demonize Israel will continue in full force. Those efforts are the greatest challenge we face.”