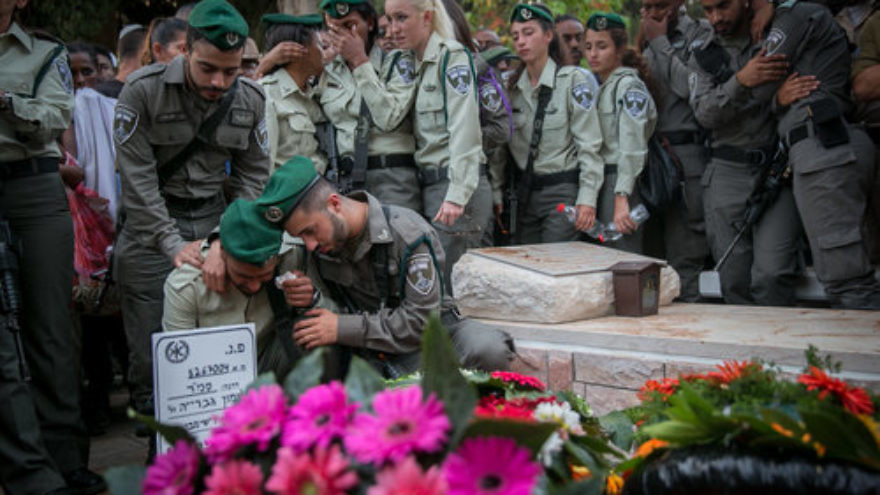 In what turned out to be a timely announcement, dozens of bereaved families Sept. 26 unveiled a new organization that seeks to fight and deter terrorism in the Jewish state. On the same day, a Palestinian terrorist killed three Israelis in the community of Har Adar near Jerusalem.

The nascent nonprofit organization, Choosing Life, brings together more than 40 families who have lost relatives in the ongoing Palestinian terror wave that began in 2015. Since the so-called “knife intifada” began in September of that year, 58 people have been killed and nearly 1,000 have been wounded in hundreds of stabbings, shootings and vehicular attacks throughout Israel.

Choosing Life is headed by Dvorah Gonen, whose 25-year-old son Danny was murdered in June 2015 while hiking near the village of Dolev.

“Unfortunately, the voices of the bereaved families are not heard strongly enough. Since Danny was murdered two years and four month ago, there is no light in my life,” Gonen said in a statement. “I am dedicating my life to ensure that this does not happen to any more Israeli citizens.”

Gonen stressed that most Israeli citizens are unaware of the vast array of benefits terrorists and their families receive from the Palestinian Authority, which provides the perpetrators and their relatives with salaries that rise proportionally with the number of Israeli lives lost.

“It pays to be a terrorist today. It is absurd, we completely lost our deterrence,” said Gonen.

Additional bereaved families involved in the initiative include Rina Ariel, the mother of 13-year-old Hallel Yaffe Ariel, who was brutally stabbed to death in her Kiryat Arba bedroom in June 2016; Merav and Herzl Hajaj, parents of 22-year-old Shir Hajaj, who was killed in a Palestinian truck-ramming attack in Jerusalem in January 2017; and Doron Mizrachi, the father of 18-year-old Ziv Mizrachi, who was killed in a November 2015 Palestinian stabbing attack. Doron Mizrachi also lost his 22-year-old brother Alon in a suicide bombing at Jerusalem’s Cafe Hillel in September 2003.

The families established Choosing Life to harness their efforts toward combating terrorism and creating more stringent conditions for convicted Palestinian terrorists serving sentences in Israeli prisons. Together, the families are also working to implement harsher punishments for individuals who are complicit in Palestinian terror attacks, including the terrorists’ family members.

“Choosing Life was established to provide a platform through which the sincere and important voices of bereaved families could be adequately expressed to the Israeli public and decision-makers,” Matan Peleg, chairman of the Zionist organization Im Tirtzu, which assisted the families with establishing their initiative, told JNS.org.

“The organization aims to prevent additional families from entering the circle of bereavement by promoting positions to increase Israeli deterrence and to mitigate the damaging effects of foreign government-funded legal assistance to terrorists,” said Peleg.

Following Choosing Life’s establishment, Im Tirtzu continues to work closely with the families, and provides them with “consultation, strategic guidance, legal assistance and any other assistance that they may need with their important work,” he said.

In late August, the bereaved Israeli families behind Choosing Life penned a letter to United Nations Secretary-General Antonio Guterres, demanding that the world body cease its funding of organizations that provide Palestinian terrorists with legal council in Israel’s Supreme Court.

The letter lambasted the U.N. for providing two groups—Hamoked: Center for the Defense of the Individual, and the Arab legal organization Adalah—with $565,000.

“Is the purpose of the U.N. treasury to lay the groundwork for the next murder of Israelis? The blood of our parents, children, brothers, sisters and other loved ones, cries out from the earth,” the families wrote.

In their letter, the families also challenged the U.N. for funding far-left, pro-Palestinian organizations such as B’Tselem and Physicians for Human Rights-Israel, which “delegitimize Israel and defame IDF soldiers.”

As Palestinian terror attacks do not exclusively target Jewish Israelis, Choosing Life is “open to all who wish to take part,” Eytan Meir, director of external relations and development for Im Tirtzu, told JNS.org.

Notably, the victims of the Har Adar terror attack came from diverse communities in Israel. Border Police officer Solomon Gavriyah, 20, was a Jewish Israeli of Ethiopian origin from the city of Be’er Yaakov. Security guard Or Arish, 25, was a Jewish resident of Har Adar. Security guard Yosef Ottman, 25, hailed from the Israeli Arab community of Abu Ghosh.

Two Druze police officers, Haiel Sitawe, 30, and Kamil Shnaan, 22, both from villages in northern Israel, were killed in an Arab terror attack near Jerusalem’s Temple Mount in July. Sitawe’s family is receiving assistance from Im Tirtzu.