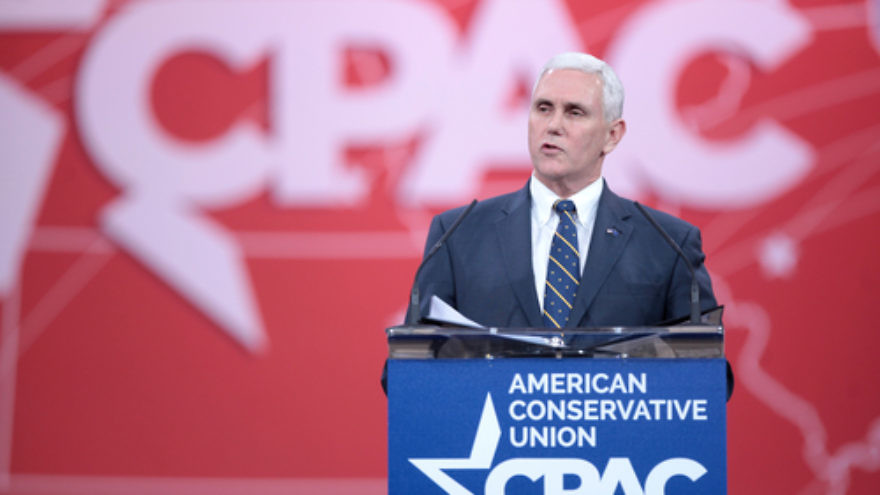 For the pro-Israel community, Pence is viewed as a strong advocate for the Jewish state who can bolster Trump’s sometimes shaky relationship with Jewish leaders. Although he has taken on a strongly pro-Israel tone in recent months, Trump had previously raised concern in pro-Israel circles by saying he would take a “neutral” approach to the Israeli-Palestinian conflict.

Pence, an evangelical Christian, has noted that his strong support for Israel is rooted in his faith.

“Let me say emphatically, like the overwhelming majority of my constituents, my Christian faith compels me to cherish the state of Israel,” Pence said in an address to the American Israel Public Affairs Committee in 2009, while he was serving in Congress.

Many analysts believe Pence can boost Trump’s standing among social conservatives and strengthen his campaign in other areas such as executive experience, foreign policy, and navigating the political scene of Washington, DC.

Pence served in the House of Representatives from 2001-13, including on the influential House Foreign Affairs Committee, where he advocated for robust military defense aid for Israel. As governor of Indiana, Pence has continued his steady record of support for Israel. He visited Israel in late 2014 and met with Prime Minister Benjamin Netanyahu.

“Hoosiers have cherished our relationship with the people of Israel for generations. As we look ahead, deepening our ties with the people, businesses, and state of Israel remains a commitment that will empower us as partners. Grounded in our shared values and our hope for the future, today our friendship is highlighted by a remarkable entrepreneurial spirit shared between our two nations,” Pence said in a statement ahead of that 2014 trip.

David Brog, a member of the board of directors at Christians United for Israel, which helped sponsor Pence’s visit to Israel, praised the Indiana governor as one of the Jewish state’s “most steadfast supporters.”

“We have known and worked with Mike Pence for years. His faith and worldview have made him one of Israel’s most steadfast supporters, both in Congress and as governor,” Brog told JNS.org. “He would be yet another powerful pro-Israel voice on Donald Trump’s team.”

In addition to his support for Israel, Pence, like Trump, favors an American foreign policy that is centered on robust military strength. He has repeatedly called for large increases in military spending and has criticized Democrats for not using the term “Islamic extremism” when describing jihadists.

Pence had also been a vocal critic of the Iran nuclear deal. In 2015, he joined 14 other Republican governors in signing a letter to President Barack Obama expressing their opposition to the deal.

Pence’s stance on the nuclear deal contrasts with his potential vice presidential opponent, U.S. Sen. Tim Kaine (D-Va.), who is rumored to be among presumptive Democratic nominee Hillary Clinton’s finalists for the job.

In 2015, Kaine was among a number of Democratic senators who boycotted Israeli Prime Minister Benjamin Netanyahu’s address to a joint session of Congress about the nuclear deal. Nevertheless, Kaine defined himself as a “strong pro-Israel Democrat” in an interview with The Forward, and also told the Washington Jewish Week following a visit to Israel in January 2016 that Netanyahu “is a key partner” that the U.S. must work with.

In Indiana, Pence signed into a law a bill that formally opposed the anti-Israel Boycott, Divestment and Sanctions (BDS) movement. Israeli Ambassador to the U.S. Ron Dermer called the Indiana measure the “toughest anti-BDS legislation in the nation.”

Elliot Bartky, president of the Jewish American Affairs Committee of Indiana, who worked closely with the Indiana State Assembly and Pence in crafting the anti-BDS legislation, said he feels the governor is an excellent choice by Trump.

“Governor Pence has had a long and distinguished track record advocating for Israel and the Jewish people as a congressman and then governor of Indiana,” Bartky told JNS.org. “We fully expect that if elected vice president, Governor Pence will continue to lead the nation with the type of sorely needed moral clarity and courage on this issue that has typified his career to this point.”

Despite his state’s relatively small Jewish community, Pence has promoted economic ties between Israel and Indiana.

“Israel and Indiana share many concerns that Hoosiers cherish,” Pence said last month at the second annual Indiana-Israel Business Exchange. “As our nation’s strongest and most important ally in the Middle East, Israel is also a key partner in our state’s economic growth.”