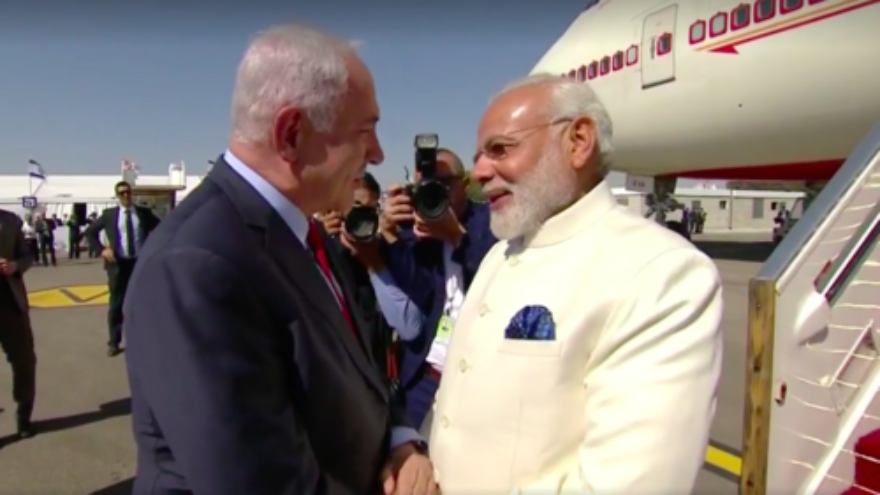 Prime Minister Benjamin Netanyahu and other top Israeli officials greeted Modi at the airport with a “segel aleph” ceremony—an honor reserved for the most important visiting dignitaries, such as American presidents and popes.

“India is the largest democracy in the world. This is a historic first visit by an Indian prime minister to Israel in 70 years and it attests to the fact that our relations with India have become closer in recent years,” Netanyahu said Sunday, adding, “This visit will deepen cooperation in a range of areas—security, agriculture, water, energy, almost every field in which Israel is engaged.”

Netanyahu is accompanying Modi throughout his visit, which has been billed as a celebration of the 25th anniversary of the establishment of Israel-India diplomatic relations.

“I am greatly looking forward to this unprecedented visit that will bring our two countries and people closer,” Modi wrote on his Facebook page Monday.

“I will have in-depth talks with Prime Minister Netanyahu on the full spectrum of our partnership and strengthening it in diverse fields for mutual benefit. We will also have the chance to discuss major common challenges like terrorism,” he wrote.

“At a time of European decline and anti-Zionism, having a population almost twice [Europe’s] size with a booming economy in Israel’s corner has vast potential importance,” Pipes added.

Amid burgeoning Indian-Israeli cooperation in the fields of agriculture and water technology, Modi is touring the Danziger Flower Farm—accompanied by Netanyahu and Israel’s Agriculture Minister Uri Ariel—as well as a desalination plant in Haifa.

Other stops on Modi’s packed tour of the Jewish state include the Yad Vashem Holocaust remembrance center, the Israel Museum and a meeting with a Jewish child whose parents were killed in a terror attack on the Chabad House in Mumbai in 2008.

Modi and Netanyahu are addressing a rally of Israel’s Indian community in Tel Aviv Wednesday evening, in addition to participating in a wreath-laying ceremony at the graves of Indian soldiers Thursday in Haifa.

A meeting with the Palestinian Authority in Ramallah is notably absent from Modi’s agenda, with the Indian government saying it believes the prime minister’s standalone visit to Israel serves to further “underline the significance of India’s special ties with the Jewish nation.”

“Modi’s visit marks 25 years of ties between Israel and India. This is no small feat for both countries, given the complex politics of the Indian subcontinent and the Middle East,” Dr. Jonathan Schanzer, senior vice president of research at the Foundation for Defense of Democracies think tank, told JNS.org.

Schanzer added, “The relationship is rooted in a common sense of purpose—the fight against extremist interpretations of Islam in a tough neighborhood. But more recently, the two countries have engaged in big business, particularly in the field of defense. The relationship can be expected to deepen further with this visit, as both sides can learn from one another in other fields as well.”

In February, Modi approved a $2.5 billion purchase of an advanced Israeli-made anti-aircraft missile system for the Indian Army. The air-defense system, known in Israel as the Barak 8, was jointly developed by India’s Defense Research & Development Organization and Israel Aerospace Industries, and is designed to defend against airborne threats including aircraft, helicopters, anti-ship missiles, UAVs, cruise missiles and fighter jets. The system is scheduled to be deployed by 2023.

In addition to the Barak 8 system, Israel and India are cooperating on a long-range surface-to-air system that will be deployed on Indian Navy warships.