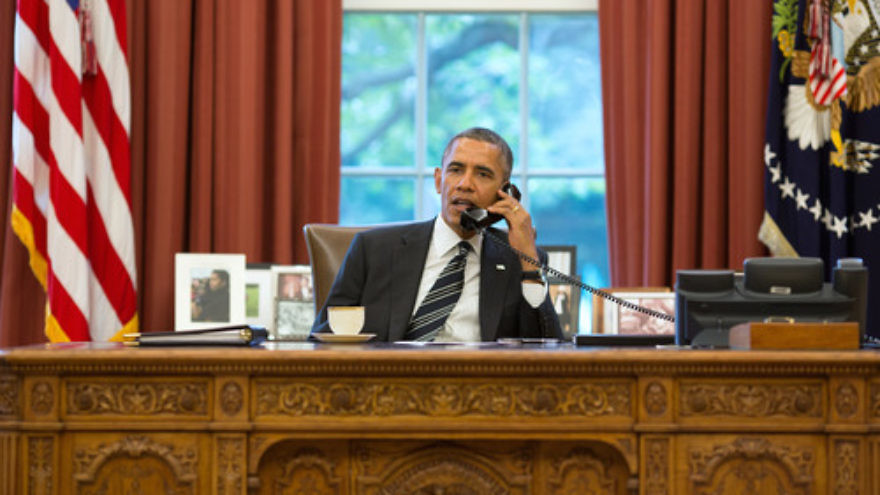 U.S. President Barack Obama, sitting in the Oval Office, speaks on the phone with Iranian President Hassan Rouhani on Sept. 27, 2013. At the time, it was the first direct conversation between heads of the American and Iranian governments since 1979. Credit: Pete Souza/White House.
Republish this article
1090 WORDS
Spread the word.
Help JNS grow!
Share now:

(August 12, 2015 / JNS) As President Barack Obama attempts to convince a skeptical American public and Congress on the Iran nuclear deal, Obama has presented the agreement as limited to reducing Iran’s capacity to produce a nuclear weapon and not part of a broader transformation of Iran. But additional statements by Obama and others in his administration have indicated that the deal is indeed a stepping-stone for diplomatic developments that U.S. allies who are critical of the deal—like Israel and Saudi Arabia—consider worrisome.

“This is absolutely the objective of the deal,” Ilan Berman, vice president of the American Foreign Policy Council think tank and author of the recent book “Iran’s Deadly Ambition: The Islamic Republic’s Quest for Global Power,” told JNS.org. “Some of the components of the deal such as the scope of sanctions relief, the delisting of known terrorists, they don’t have much of anything to do with the Iranian nuclear program.”

In an Aug. 8 interview with CNN, Obama said he sees the Iranian nuclear issue as making it possible for broader talks with Iran on other issues like the Syrian civil war.

“Is there the possibility that having begun conversations around this narrow [nuclear] issue that you start getting some broader discussions about Syria, for example, and the ability of all the parties involved to try to arrive at a political transition that keeps the country intact and does not further fuel the growth of ISIL (Islamic State) and other terrorist organizations? I think that’s possible,” Obama said.

“Over 15 years, things happen in countries, and if you look at Iran today, very educated, used to be friendly with a lot of nations in the region, including Israel,” Kerry said at a Council on Foreign Relations event. “You know, there’s a long history with Persia. And the reality is that those people, who are 20-percent unemployed, want a future.”

Iran did once play an integral role in America’s Cold War alliance in the Middle East as part of the Baghdad Pact, later renamed Central Treaty Organization, along with other partners like Turkey. Under the Iranian Shah, there was close economic and military cooperation between the U.S. and Iran. Israel also played a major role in that ecosystem. As a non-Arab Western-aligned nation, Iran and Israel cooperated closely to thwart Arab states like Iraq, Syria, and Egypt, who were all allied with the Soviet Union.

Despite the non-existent relations between the U.S. and Iran since the 1979 Islamic Revolution, some see the Iran deal as paving the way to America working with Iran as potential ally in the fight against threats like Islamic State, which has targeted Shi’a Muslims in Iraq and poses a threat to the Syrian government of President Bashar al-Assad, a longtime ally of Iran.

Berman questioned the logic of trying to collaborate with Iran, especially when that move has the potential to alienate key U.S. allies like Israel and Saudi Arabia.

“The Muslim world is overwhelmingly Sunni, while Shi’a are only a small minority. The logic is to team up with the majority. This is a pretty brazen flipping of the script where you are allying with the minority. I don’t think it makes sense as a longterm play to fundamentally reconfigure the Middle East,” Berman told JNS.org.

In an April interview with the New York Times, Obama envisioned the nuclear deal and sanctions relief as changing Iran’s overall approach to the Middle, saying that “then what’s possible is you start seeing an equilibrium in the region, and Sunni and Shi’a, Saudi [Arabia] and Iran start saying, ‘Maybe we should lower tensions and focus on the extremists like [Islamic State] that would burn down this entire region if they could.’”

Berman said he believes the hope of changing Iran is part of an overall strategy by the Obama administration to “reduce its footprint in the Middle East” and gain “a strategic partner to carry its water in the fight against the Islamic State.”

Opponents of Obama’s strategy have pointed that forging an agreement with the Iranian government legitimatizes the world’s leading state sponsor of terrorism. That government is also comprised of aging leaders—many in their 70s and 80s who don’t necessarily represent the future of Iran.

“Iran is totally in flux,” Berman said. “The proper way to look at Iran is in two ways. You have the ruling regime which is aging and chlorotic and doesn’t really represent the aspirations of the Iranian people. Then there’s the people who it rules over who might have some really different ideas about where they stand for Iran’s future.”

Indeed, more than 60 percent of Iran’s population is under 30 years old, with many poised to revolutionize Iran. The younger Iranians are better educated and worldlier than the previous generation due to their exposure to global media, ideas, and culture through the Internet and satellite television.

“The impact of Iran’s baby boomers, born in the 1980s, is only beginning to be felt. Now in their 20s, the boomers will become even more important as they age in defining—and potentially redefining—Iran’s political, economic, and social agenda over the next quarter century,” the United States Institute of Peace has said.

Along those lines, the fundamental bargain of the Iran deal “is that we decided to talk to the first Iran, not to talk to the second Iran,” explained Berman.

“And I think that is a losing play over the long term, because in the long term Iran is going to evolve,” he said. “What we have signaled to the young and democratic forces in Iran is that we want the old Iran and we are not going to evolve with you.”