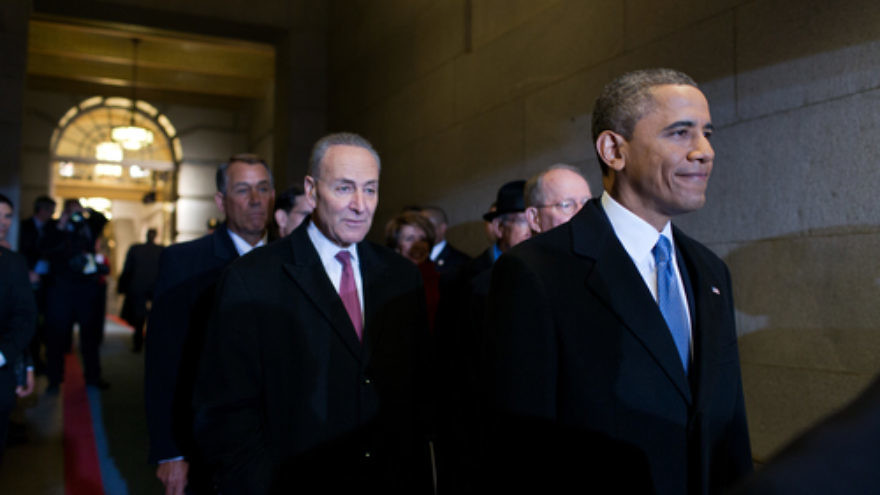 (April 13, 2015 / JNS) In the aftermath of the recently reached framework understanding on Iran’s nuclear program, the agreement’s fate on American soil could rest in the hands of a small group of federal legislators.

On April 14, the U.S. Senate Foreign Relations Committee unanimously passed a modified version of the Iran Nuclear Agreement Review Act of 2015. The bill will now proceed to a full Senate vote. If passed, it would require the Obama administration to submit the final nuclear deal—for which world powers (including the U.S.) and Iran have a June 30 deadline—to Congress for review. Sponsored by Foreign Relations Committee Chairman U.S. Sen. Bob Corker (R-Tenn.) and U.S. Sen. Robert Menendez (D-N.J.), the review bill is co-sponsored by a bipartisan group of 20 senators.

American Jewish Committee Executive Director David Harris told JNS.org that “Congressional review of a final deal with Iran, whenever it might be achieved, is essential.”

“Otherwise, we could face the possibility that the U.N. Security Council, including current member nations like Malaysia and Venezuela, gets to vote on the Iran agreement, but not elected officials from our 50 states,” said Harris. “Understandably, that might not go over well at all with the American people.”

Before the review bill’s committee passage, Corker and U.S. Sen. Ben Cardin (D-Md.) struck a  bipartisan deal to modify the legislation. In the new version, a 60-day period for Congress to review a nuclear deal has been be cut in half to 30 days. The review period also includes a maximum period of 12 days for the president to decide whether to accept or veto a Congressional decision on the deal.

Corker also agreed to modify the bill’s language on terrorism. The bill originally called for the president to certify to Congress every 90 days that Iran was not involved in terrorism against Americans, with sanctions being re-imposed if Iran was found complicit in terror. Under the new language, the president would need to send Congress periodic reports on Iran’s involvement in terrorism and on its ballistic missile program, but the details of those reports would not set off the renewal of sanctions that were lifted under the nuclear deal.

“What I’m most proud of is we’ve kept the pure integrity of the process in place and the president cannot lift—while Congress is reviewing this—cannot lift the congressionally mandated sanctions, which is what they’ve been trying to do and push for over the past couple of weeks,” Corker told reporters Tuesday.

When it goes to the full Senate, the bill will need three-fifths approval (60 senators if all are present) in an initial cloture vote in order to come up for an actual vote. A majority of the senators present for the vote then need to vote in favor of the bill for it to pass. Since virtually all of the 54 Republican senators are expected to back the Corker-Menendez bill, and with nine Democrats co-sponsoring the measure, it is expected to pass smoothly in the Senate.

If that happens, the bill goes for a vote in the House of Representatives, where a majority is needed to pass it. The bill then would move to President Barack Obama’s desk. If Obama vetoes the bill, both the House and Senate would then require two-thirds majority votes to override the veto. This is typically achieved with 290 House votes and 67 Senate votes, depending on how many legislators are present for the vote in each Congressional chamber. Though Obama has previously threatened to veto the bill, White House spokesman Josh Earnest said Tuesday that the president would sign the modified version if there are no additional changes.

Corker has indicated that he is confident the review bill will receive support from as many as 65 senators—meaning that, with 67 votes needed to override a potential presidential veto, the outcome could come down to the decisions of just a few senators. For some Democrats, if Obama’s opposition to the bill is reignited, approving or rejecting the review bill could come down to choosing between their prioritization of the Iran nuclear issue and their loyalty to the president.

U.S. Sen. Chuck Schumer (D-N.Y.), a Jewish legislator who on March 26 announced his co-sponsorship of the Corker-Menendez bill, reiterated his support for the measure after the framework was reached on April 2.

“This is a very serious issue that deserves careful consideration, and I expect to have a classified briefing in the near future,” Schumer told Politico in an interview published April 6. “I strongly believe Congress should have the right to disapprove any agreement, and I support the Corker bill, which would allow that to occur.”

Zionist Organization of America National President Morton A. Klein went on to praise Schumer’s “strong, principled public stand in support of Congressional oversight of any deal that the Obama administration may conclude with Tehran.”

On Tuesday, Schumer said in a statement after the modified bill’s committee-level passage, “I want to thank Senators Cardin and Corker for their hard work—they both did an excellent job. It’s important that this process be as bipartisan as possible, and clearly they’ve been able to do that and come to an agreement. The American-Israel relationship has always been bipartisan and I’m glad we’re continuing in that fine tradition.”

Another Democrat strongly supporting the review bill is U.S. Sen. Tim Kaine (D-Va.), who said in a statement in February, “I believe Congress should weigh in on the content of the deal given the centrality of the Congressional sanctions to the entire negotiation and the significant security interests involved. This legislation sets up a clear and constructive process for Congressional review of statutory sanctions relief under a standard that is appropriately deferential to the executive branch negotiating the deal.”

Besides Kaine, the other Democratic members of the Foreign Relations Committee had made comments indicating a variety of positions on the bill before its unanimous committee-level passage on Tuesday. U.S. Sen. Barbara Boxer (D-Calif.) had raised concern about the legislation, saying in a statement, “Now that all parties have agreed to a framework, Congress has a choice: support these negotiations or disrupt them and potentially jeopardize this historic opportunity to prevent Iran from acquiring a nuclear weapon.”

Menendez, meanwhile, was recently indicted on federal corruption charges—allegations that some have called politically motivated given his defiance of Obama on Iran policy—and has been replaced as the Foreign Relations Committee’s top-ranking Democrat by Cardin, who negotiated Tuesday’s compromise on the bill with Corker.

On April 2, committee member U.S. Sen. Chris Coons (D-Del.) said Congress must be heard in the process of reaching a final deal with Iran, but warned that if changes to the bill make it “nothing more than a partisan vehicle for killing the prospects for a deal, I won’t support that.”

Elsewhere among the committee’s Democrats, U.S. Sen. Jeanne Shaheen (D-N.H.) called the April 2 agreement a “positive development” and said she is looking forward to “closely reviewing the framework.” Shaheen was one of several Democratic senators who blasted Senate Republicans for their letter to Iranian Supreme Leader Ayatollah Ali Khamenei last month. The Republican letter stated that any nuclear deal is contingent on Congressional approval and warned that the deal could expire after Obama leaves office.

U.S. Sen. Tom Udall (D-N.M.) has said in a statement that Congress “needs to allow the administration to continue to have the space to negotiate the final agreement, and therefore should not pass legislation which would only complicate the progress towards a diplomatic solution.” Before the unanimous committee passage, U.S. Sens. Ed Markey (D-Mass.) and Chris Murphy (D-Conn.) had not indicated specific positions on the review bill. In October 2013, Markey warned that the U.S. “should not relax the sanctions one inch while Iran’s intentions are still unknown,” Foreign Policy reported. On April 5, Murphy praised the framework deal in an interview on NBC’s “Meet the Press.”

“It’s true that this deal doesn’t turn Iran from a bad guy into a good guy,” Murphy said. “But it’s a little bit of rewriting of history to suggest these negotiations were about all of the other nefarious activities of Iran in the region.”

David Brog, executive director of Christians United for Israel (CUFI), told JNS.org that CUFI has “always believed that Congress has a responsibility to review any nuclear deal with Iran, and that the Corker-Menendez bill is the best vehicle to ensure that Congress performs this duty.”

“The disturbing details of the framework announced [April 2] demonstrate that this Congressional review is the only thing standing between us and a very dangerous new world,” said Brog.

Joshua Muravchik, a fellow at the Foreign Policy Institute of Johns Hopkins University’s School of Advanced International Studies,” told JNS.org that Obama’s opposition to Congressional review could be construed as a “betrayal of public trust.”

“If he feels confident that his is the wisest choice, why is he not confident that he can convince the Congress of this—as other presidents of both parties have regularly done over matters of supreme importance to the safety of the nation?” Muravchik asked.

But with enough votes to override a veto, the Senate could render Obama without a chess move.

“Any senator that fails to support Corker-Menendez will be called upon to explain why they chose to sit out the most important foreign policy issue of our day,” Brog said.

—With reporting by Jacob Kamaras and Sean Savage