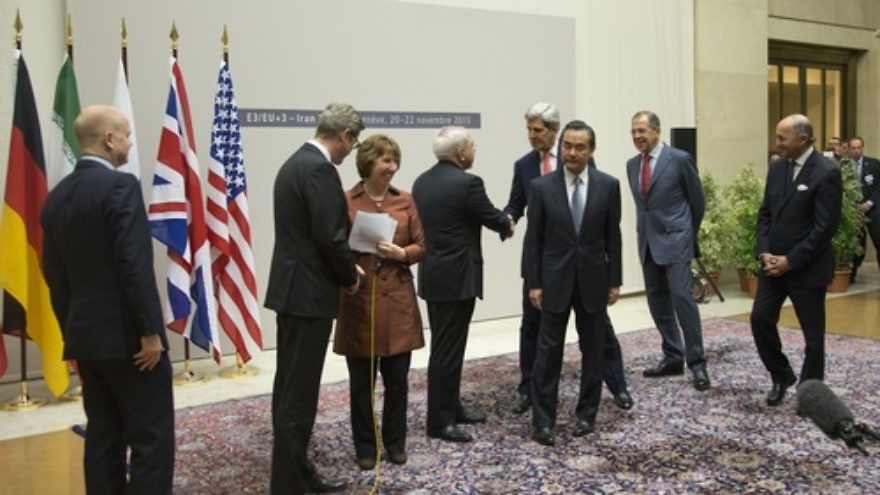 (November 25, 2013 / JNS) The P5+1 powers and Iran over the weekend reached an interim agreement on Iran’s nuclear program that highlights the cultural and strategic differences of the major players affected—the U.S., Iran, and Israel.

Iran will receive $7 billion in sanctions relief in exchange for what the deal’s opponents call modest checks and reductions on its nuclear development, including the promise by Iran to dilute all existing uranium stockpiles already enriched to 20 percent, while the country maintains its ability to enrich to 5 percent. Critics of the deal believe it may ultimately bring the region closer to war than peace.

“I’m afraid Israel is in the most dangerous situation it’s ever been,” U.S. Rep. Trent Franks (R-AZ) told JNS.org.

According to Franks, who sits on the Congressional Subcommittees on Strategic Forces and Emerging Threats and Capabilities, as well as on the Congressional Israel Allies Caucus, Israel can no longer rely on the U.S. to prevent Iran from developing nuclear weapons, and has no choice but to rely on its own military means if it intends to prevent Iran from becoming a nuclear power.

“There is no doubt that Iran is in pursuit of nuclear weapons,” Franks said.

Israeli Prime Minister Benjamin Netanyahu was particularly harsh and direct in condemning the agreement promoted by the White House, an unusual occurrence in U.S.-Israel relations.

“Iran is committed to Israel’s destruction, and Israel has the right and the obligation to defend itself by itself against any threat. I want to make clear as the prime minister of Israel, Israel will not allow Iran develop a military nuclear capability,” he said.

In the days leading up to the agreement, Iranian Supreme Leader Ayatollah Ali Khamenei had particularly harsh words both for Israel and Western powers, and signaled that participating in the negotiations is a tactical pursuit.

Khamenei stepped up his rhetoric, referring to Israel as a “rabid impure dog,” utilizing language that is particularly offensive in Islamic culture.

“Zionist officials cannot be called humans, they are like animals, some of them. The Israeli regime is doomed to failure and annihilation,” Khamenei said in comments U.S. Secretary of State John Kerry called “inflammatory.”

On the negotiations, Khamenei stated in an address to his Basij internal forces that, “Using forms of soft gymnastics in Geneva is a maneuver towards our final goal.”

Khamenei warned that Iran would not tolerate military steps designed to ensure it did not develop nuclear weapons, stating that Iran would “slap aggressors in the face in such a way that they will never forget.”

Dr. Harold Rhode, a Jewish historian who served as an Islamic analyst in the Pentagon for more than two decades, believes that each of the parties in the nuclear program deal is acting true to character.

“Nothing at all surprises me here,” Rhode told JNS.org.

“President Obama is constantly changing his mind. We saw that recently with regard to Syria, and the supposed ‘red lines’ that regime crossed by using chemical weapons,” Rhode said.

According to Rhode, the back and forth on policy is raising red flags among American allies, and eroding the trust they have in the U.S. This is particularly true of Israel, which previously believed to have reached critical understandings with the U.S. on Iran’s nuclear program.

“The whole business of America having Israel’s back is no longer true, because Obama has changed his mind, and is not keeping his word to the Israeli government,” Rhode said.

Rhode believes that trusting Iran to curb its nuclear development is to deny Iran’s recent history of terror and its commitment to exporting its Islamic revolution, in addition to misunderstanding Iranian culture, particularly when it relates to conflict and negotiations.

“The Iranians invented chess, and they are adept at outfoxing opponents,” Rhode said.  “And they often do it in such a polite and sweet way that you often don’t realize what is happening right in front of you.”

“What would make Obama believe he can trust these people? Why is he deluding himself?” Rhode asked.

Rhode, who was in Iran during the early stages of the Islamic Revolution of 1979, saw firsthand how Iranians would change positions in an instant if it meant improving their position opposite an opponent.

“From my experience, when it comes to negotiations, [Iranians] are the least trustworthy people in the world,” he said.

Rhode, who has spent considerable time in Israel, said he thinks the Jewish state “is horrified, and of course rightfully so, because it is sort of a stab in the back by America.”

“Jewish history is filled with people threatening to kill us, and history has taught us that when they threaten, they do it. Why should we think otherwise? Why is this different than all the other times in history beforehand?” he said.