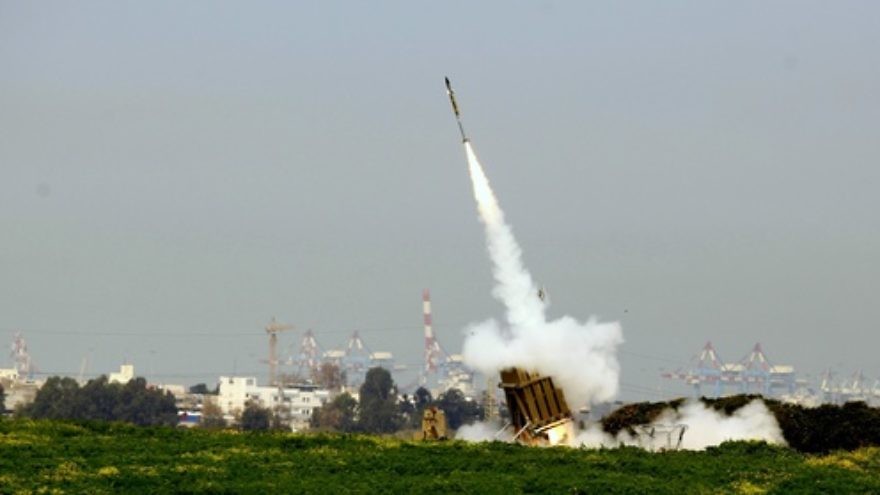 (December 30, 2013 / JNS) The security situation in Israel has grown increasingly tense of late, with a spike in terror attacks carried out on numerous fronts, and through various means, by both recognized terror groups and presumed “lone wolf” assailants. But such developments don’t rattle Vice Admiral (ret.) Yedidia Yaari.

“I sleep well because I know we (Israelis) have the capability to outsmart our enemies in every respect,” says Yaari—president and CEO of Rafael Advanced Defense Systems Ltd., Israel’s second-largest government owned defense company—in an interview with JNS.org.

Recent attacks on Israel include rockets fired by Palestinian terrorists in Gaza on Dec. 30 as well as last week, and a Dec. 29 barrage of Katyusha rockets fired at northern Israel from Lebanon. There were no injuries reported in those incidents. The Israel Defense Forces responded in the south by targeting Hamas terror targets in Gaza, including a weapons-manufacturing facility and a weapons-storage facility. In the north, the IDF launched artillery shells targeting the source of the rocket fire. The IDF, fearing further escalation, has also reportedly redeployed the Iron Dome system in several southern Israeli towns.

Rafael—the Iron Dome’s manufacturer—researches, develops, manufactures, and supplies a wide range of air, land, sea, and space application defense systems for domestic use and for IDF soldiers in the field. The company’s 2012 sales amounted to $1.8 billion, with a backlog of orders worth $4.2 billion.

Since its deployment in April 2011, the Iron Dome has had a success rate of better than 90 percent, intercepting more than 500 short and medium range rockets and missiles fired at southern Israel within 100 kilometers from Gaza. In partnership with U.S.-based Raytheon Missile Systems, Rafael has also developed the David’s Sling system to defend Israel against long-range artillery rockets, short-range ballistic missiles, cruise missiles, and other traditional air-defense threats. In November, the system successfully completed its second interception test against a short-range ballistic missile. Yaari is hopeful that David’s Sling will be fully operational by 2015.

Yaari has been in his current role at Rafael since December of 2004, after an illustrious 39-year career in Israel’s Navy during which he served as commander in chief from 2000. The Iron Dome and David’s Sling, he explains, are the first two components within Israel’s “three-tiered umbrella defense system,” which also includes the joint U.S.-Israel Arrow Weapons System, already deployed to intercept long-range surface to surface ballistic missiles while they are still outside of the earth’s atmosphere.

But how is Rafael—a relatively small defense company when compared to other similar companies around the world, with just 6,500 employees—able to compete in the global marketplace? Yaari tells JNS.org, “Our secret to compete with the U.S., Russia, France, in this brutal competition is simply the skill set and excellent engineering corps developed here for the past 60 years in our R&D (research and development) center. [With] our variety of technicians, their depth of knowledge, [and] such a variety of technologies, we are a unique company, and while we are small [we] can compete with these giants.”

Another advantage Rafael has is “the spirit of the people,” according to Yaari.

“Rafael has retained a special type of personal commitment from everyone who works here, which has enabled us to form a concentrated effort,” he says.

Yaari says Rafael developed the Iron Dome system in a way no one else has done—from scratch. “This was accomplished with hundreds of people working together around the clock for three years,” he says.

At one point while the Iron Dome was being developed, Yaari recalls that those working on the project took a break and were bused down to the beleaguered Gaza-border town of Sderot, where thousands of rockets have fallen since the year 2000.

“We went down to Sderot for a day, to meet with the residents and get an intimate feel of who we were working for. That visit made us push even stronger [to finish],” he says.

Yaari explains that the Iron Dome—currently with six operational batteries available for deployment at short notice, based on threat assessment—is a relatively inexpensive, yet highly efficient, solution against different types of “mass rocket-based artillery that the opposition is using, including Qassam rockets as well as Grad and Fajr missiles, which is our current problem.” He says the Iron Dome “exceeded all expectations” during Israel’s 12-day Operation Pillar of Defense mission against Gazan terror in November 2012. During that time, when more than 1,500 rockets were fired at Israel, Iron Dome batteries were strategically deployed and programmed only to shoot down rockets that were headed directly towards Israeli civilian population centers. The Iron Dome deemed two-thirds of the rockets fired at Israel during Pillar of Defense to be non-threatening, and the system intercepted 90 percent of the threatening rockets.

Thanks to the Iron Dome, Israel was “still able to function in the midst of a war” during Pillar of Defense, says Yaari.

“The trains were running, people were going to work, the port at Ashdod was open, everything became sustainable,” he says, adding that the Iron Dome’s presence meant that the Israeli government’s decisions during the war were made “in a controlled manner.”

“They didn’t have to make hasty decisions, as the entire situation was manageable,” Yaari says.

Rafael’s CEO feels deep gratitude to the U.S. government for providing Israel with the funding necessary to deploy an additional four Iron Dome batteries once the first two were in place.

“We should be thankful to the United States and the president,” Yaari says. “Whenever I travel to the U.S. and meet with Congress I say, ‘Thank you.’ It was really life-saving, and we all have to be grateful for that. It was a special gesture, and [for those who doubt the U.S. commitment to Israel], it is wrong to downplay the effect [U.S. support] has on our defense.”

Since the Iron Dome is specifically geared towards countering one type of threat, Yaari says the joint U.S.-Israel David’s Sling system is necessary “to intercept the cruise missiles, and short to medium range ballistic missiles, which are becoming more and more relevant.” He says that David’s Sling also has the capability to defend against “UAV’s (unmanned ariel vehicles, also known as drones), jetfighters, and helicopters— any flying object within the atmosphere.”

Shifting the focus of the conversation to the Iranian threat, Yaari says that the current challenges posed by the Islamic Republic—not only for Israel, but also for other countries who might be targeted—are “Iran’s unlimited funding, skill sets, manpower, and huge amounts of resources which for quite some time have been directed towards defense.”

Yaari describes a fierce and competitive race for technology, where in the coming years he says Israel “must distance itself” from Iran by making greater military advances. He believes Israel is up for that challenge.

“I think it’s feasible [for Israel to outpace Iran], I really do,” Yaari says. “The real problem is what eventually will be translated into practice on the battlefield. In other words, how much of [Iran’s] potential capabilities will we have to confront. But I believe we are capable.”