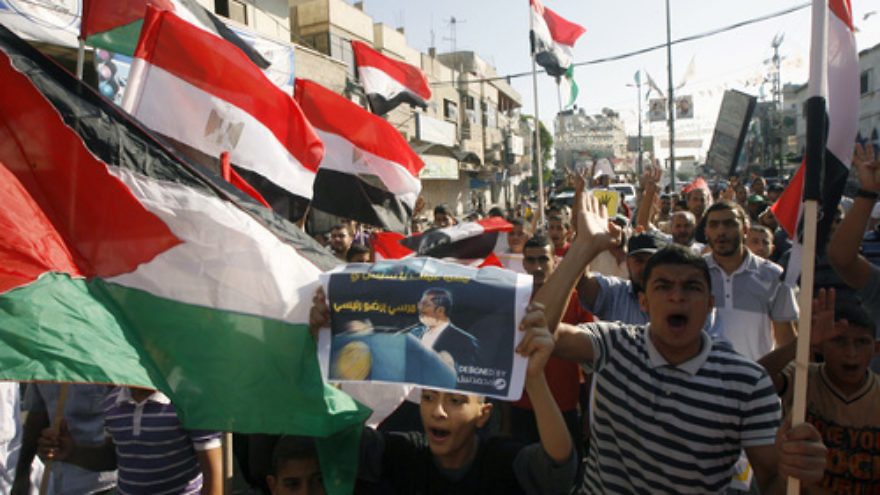 (August 26, 2013 / JNS) In the shifting sands of the tumultuous Middle East, Hamas, the Palestinian terror group in control of the Gaza Strip, has found itself in an increasingly precarious position.

Feared for its massive arsenal of rockets and trained jihadis, the terror group is today also facing isolation and internal discord. With its Muslim Brotherhood allies on the run in Egypt, strained relations with former benefactors in Iran and Syria, and an increasingly technologically savvy Israeli enemy, the terror organization—while still dangerous—is facing a perfect storm of problems that threatens to undermine its power.

“While one cannot currently  say Islamist groups like Hamas are completely down and out, the removal of [Mohamed] Morsi’s government in Egypt and the subsequent crackdown on Muslim Brotherhood leadership, as well as the Muslim on Muslim fighting in Syria, together create serious problems for Hamas,” Matthew Levitt, senior fellow and director of the Stein Program on Counterterrorism and Intelligence at the Washington Institution for Near East Policy, told JNS.org.

For many years, Hamas relied on Iran and its partners, Syria and Hezbollah, for military hardware such as rocket missiles, terrorist training, and financial support. It is estimated that Hamas at one point received up to $250 million annually from Iran. But all that changed following exiled Hamas leader Khaled Mashaal’s decision to close the Hamas office in Damascus in early 2012 and to pursue support from Sunni powers such as Turkey, Qatar and the Muslim Brotherhood in Egypt, all of which were on the rise at the time.

The relationship between Sunni Hamas and Shi’a Iran has always been united around their mutual hatred of Israel. In a region that is increasingly split between Sunni and Shi’a forces, Hamas somehow managed to bridge the deep theological divide between the two major Islamic sects. But in today’s increasingly polarized Middle East, with Sunni and Shi’a forces squared off in a bloody battle for the future of Syria and further tensions in Lebanon, Iraq, and in the Persian Gulf, Hamas has become the odd man out.

“They [Hamas] are now largely isolated. They don’t have Egypt or Syria and their relationship with Hezbollah and Iran is deeply strained, though not completely broken,” Levitt told JNS.org.

But in light of the changes in the Middle East, Hamas may be rethinking its strained relations with Iran.

“Qatar, the Muslim Brotherhood and other Sunni allies are not capable of supporting Hamas like Iran,” Levitt said.

Qatar reportedly pledged more than $400 million to Hamas in October 2012 during a visit to Gaza by Qatar’s ruling emir at the time, Sheikh Hamad bin Khalifa al-Thani. Hamad, however, abdicated in June, and his son and successor, Sheikh Tamim bin Hamad Al Thani, has been less receptive to Hamas and the Muslim Brotherhood. Rumors are that he expelled leaders of both organizations, Mashaal and Sheikh Yusuf Al-Qaradawi, in late June during the Egyptian protests against the Muslim Brotherhood.

Turkey, another budding Sunni ally of Hamas, has also seen its fortunes fade under the leadership of Islamist Prime Minister Recep Tayyip Erdogan. The once-close Turkish-Israeli relationship has not recovered from the blow of the 2010 Gaza flotilla incident, as a result of Erdogan’s steadfast support of Hamas, strong criticism of Israel’s policies towards the Palestinians, and conspiracy theories such as his recent comment that Israel was behind the overthrow of Morsi in Egypt.

But the tide has changed in Turkey. Popular protests against Erdogan and his Islamist Freedom and Justice Party in early June reduced the prime minister’s clout. Meanwhile, attempts by Erdogan to visit Gaza have been reportedly thwarted by Egyptian military authorities, who are upset over Erdogan’s criticism of the Muslim Brotherhood’s ouster.

While deteriorating relations with Qatar and Turkey have been setbacks for Hamas, by far the hardest pill to swallow has been its jihadi parent company’s ouster from power in Egypt. Founded in 1988 as an offshoot of Egypt’s Muslim Brotherhood, Hamas has always looked to the group for ideological inspiration. But Egypt’s former secular President Hosni Mubarak, and his predecessors Anwar Sadat and Gamal Nasser, considered the Muslim Brotherhood—and by extension, Hamas—a top enemy. With Mubarak’s removal in February 2011 and the election of the Muslim Brotherhood’s Morsi in Egypt, Hamas believed it finally had a partner next door.

Under Morsi, the Muslim Brotherhood promised Hamas that it would allow them to open an office in Cairo and ease border controls between Gaza and Egypt. But with Morsi’s ouster and the crackdown on the Muslim Brotherhood by the Egyptian military, Hamas has been cut off. The Egyptian military is also deeply concerned with lawlessness in the Sinai Peninsula and has held Hamas accountable for the support of jihadi groups there.

According to reports, Hamas has been careful in its response to the situation in Egypt. It has not held any large-scale rallies in support of the Muslim Brotherhood, despite the offensive recently launched against the group.

Within Hamas, there has also been a debate over the future of the organization. Long-time exiled leader Khaled Mashaal sought to distance the group from Iran and align more with Sunni powers and the Muslim Brotherhood, whereas Hamas Prime Minister Ismail Haniyeh called for more focus on Gaza. Meanwhile, other Hamas leaders such as Hamas’s former envoy to Iran, Imad al-Alami, have insisted on a rapprochement with Iran.

“It is in the interest of Hamas today to revise its rapport with Iran and Hezbollah for many reasons,” Hani Habib, a political analyst based in the Gaza Strip, told Reuters. “At the end of the day, all the parties have an interest in this partnership.”

Iran, however, has made it clear that Hamas needs to fully revise its stance on Syria if it would like to be welcomed back into the Shi’a resistance club.

Domestically, Hamas may also be feeling the heat in Gaza. Despite its jihadist credentials, Hamas has long been a target of Islamic Jihad, another smaller Palestinian terror group, as well as ultraconservative Al-Qaeda inspired Salafi groups, who ironically consider Hamas too moderate and seek to replace Hamas with their own Islamic-style emirate in Gaza.

Meanwhile, Tamarod, the Egyptian movement that led to the protests and eventual ouster of Morsi, has recently set its sights on Hamas.

“It is time we rejected death forcibly under Hamas’ pretext of security. Our people, regardless of their political and even religious affiliations, have been targeted by their criminality,” a statement from the group declared. The group explicitly accused Hamas of murder, torture, sabotage, bribes, vandalism and smuggling, Ma’an News Agency reported.

Tamarod has called for Nov. 11 to be an official day of protests against Hamas.

“There is lot of public discontent with Hamas in the Gaza Strip,” Levitt told JNS.org.

With the restart of Israeli-Palestinian conflict negotiations, which are being conducted with Hamas’s archrival, the Fatah-controlled Palestinian Authority, Hamas may be able to play the role of spoiler, launching rockets or terrorist attacks against Israel in hopes of derailing peace—a familiar role harkening back to the 1990s.

But last fall, Israel launched an eight-day air offensive known as Operation Pillar of Defense on Hamas in response to Hamas rockets that were terrorizing southern Israel. An Israeli airstrike at the beginning of the campaign left one of Hamas’s top operatives, Ahmed al-Jabri, dead.

Unlike previous engagements with Hamas, Israeli ground forces did not enter the Gaza Strip. Many analysts credit Israel’s groundbreaking Iron Dome anti-missile system for reducing Israeli civilian causalities, and thus alleviating pressure on Israeli leaders to launch a more comprehensive ground campaign. The Iron Dome, according to the New York Times, has shot down more than 400 Hamas rockets with an 85-percent success rate, effectively neutralizing Hamas’s primary weapon against Israel.

“It is not clear that Hamas is in the position to cause as much trouble as it once did. It has missiles and rockets to fire, but they also know it will be on the receiving end of strong Israeli response,” Levitt told JNS.org.