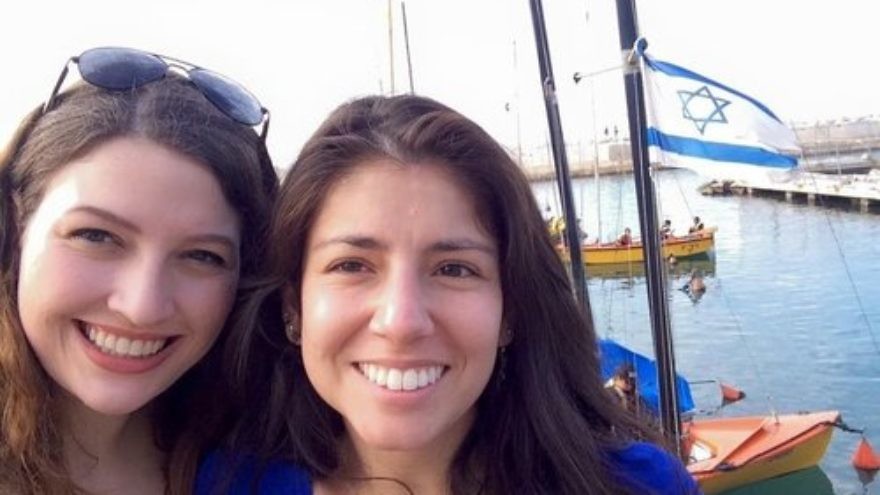 (April 2, 2017 / JNS) For Molly Horwitz, it’s not the anti-Semitism itself that stings the most. The feeling that some Stanford University Jewish leaders abandoned her in her fight against discrimination is what still brings tears to her eyes.

As Horwitz and a fellow Stanford alum see it, those Jewish leaders were borderline hostile toward mainstream pro-Israel students while fostering warmer relations with the campus arm of J Street, the self-described “pro-Israel, pro-peace” lobby.

If true, the former students’ allegations are not isolated, but indicative of the extent to which J Street’s agenda permeates campus discourse on Israel—including within Hillel, the international organization fostering Jewish life at more than 550 colleges and universities.

The question that started it all

In the spring of 2015, Molly Horwitz, then a junior at Stanford and a candidate for student senate, was publicly questioned by the Students of Color Coalition (SOCC) about how her “strong Jewish identity” would affect her vote on an anti-Israel resolution. She was offended and outraged.

Horwitz, who graduated in 2016, claims Stanford Hillel Executive Director Rabbi Serena Eisenberg and then-Director of Jewish Life and Learning Rabbi Daniel Silverstein attempted to thwart efforts to expose campus anti-Semitism, fearing it would drive Jewish students away from the prestigious university. Eisenberg and Silverstein allegedly labeled Horwitz and Miriam Pollock, then president of the pro-Israel student group Cardinal for Israel, as “radicals” and unfit to lead. (Eisenberg said on Facebook March 31 that she will step down from her position at the end of June. She did not disclose why she is leaving Hillel, but noted she is “excited to take a break.”)

After she first became acquainted with Stanford Hillel following the SOCC incident, Horwitz told the Haym Salomon Center that a friend recommended she speak to Eisenberg, who subsequently “advised that we should not talk about what happened because…it would discourage Jewish students from enrolling at Stanford.”

Pollock, who joined Horwitz for that conversation with Eisenberg, echoed that the Hillel director “wanted the controversy to blow over, quietly.”

The climate for Jews at Stanford

According to the campus anti-Semitism watchdog AMCHA Initiative, 22 anti-Semitic incidents have occurred at Stanford since January 2015. This year alone, six incidents involving swastikas appearing on campus have been reported.

Horwitz won the student senate seat. The following spring, she offered a resolution calling on the senate to support Jews against anti-Semitism. Horwitz said a Stanford Hillel staffer told her that “only if J Street got on board with the bill, would [Hillel] support the measure.”

It was not until an uproar over controversial comments by student senator Gabriel Knight that Hillel changed its approach, Horwitz said. Knight opposed the resolution’s language, arguing that the anti-Semitic canard of Jewish control over government, media and finance “theoretically” should not be regarded as anti-Semitism.

After Knight’s remarks, Horwitz said Hillel sent out emails praising the bill. “I was very uncomfortable being manipulated and used by someone who didn’t want to even be associated with the bill in the first place,” she said.

Hillel International provided the Haym Salomon Center with a copy of a letter Hillel distributed in support of the bill. Horwitz stands by her remarks, saying, “Only after me pressuring them and stating that there is a precedent of Hillel’s sponsoring similar bills, did they write the letter.”

J Street did sponsor the resolution against anti-Semitism. But Horwitz and Pollock claim the progressive group’s perspective was forced upon Israel advocates on campus.

At the start of the 2015-16 school year, Silverstein “informed me I would not be a good leader because I didn’t have ‘liberal values’” and told all prospective members of Cardinal for Israel that they “would be working with J Street,” Pollock said.

Although she considers J Street “anti-Israel,” Pollock said she “attempted to work with J Street on those few issues where we saw eye to eye.” Yet J Street “was unwilling to work with Cardinal for Israel when given certain reasonable conditions,” she said.

Pollock is referring to a vigil organized by pro-Israel students to remember those killed and injured during the Palestinian “stabbing intifada” against Israelis from September 2015 through the first half of 2016.

Horwitz said Eisenberg declined her invitation to lead the memorial prayer, “telling me that it was not okay for us to leave out the Palestinians who died in those attacks, and it was too right-wing because we hadn’t talked to J Street about co-sponsoring with us.”

When Pollock approached J Street about participating, she said they refused to meet conditions such as “not bringing up or criticizing ‘the occupation’ during the vigil for Israeli victims of terror.”

According to Horwitz, Hillel ultimately funded a vigil paying homage to Palestinians, promoted by students involved with the anti-Israel group Jewish Voice for Peace. Eisenberg made herself available to attend the Cardinal for Israel vigil, but only after another rabbi agreed to lead the service, Horwitz said.

The current and former Hillel staffers both dispute the alums’ claims.

“Their allegations are false…the experiences of two individuals are not reflective of the experiences of the majority Jewish community on campus,” said Eisenberg. “Thousands of students of diverse backgrounds and political perspectives have been touched and inspired by Stanford Hillel to strengthen their Jewish identities and connect to Jewish life, learning and Israel.”

“If you interview a representative cross-section of Jewish students who were present at Stanford during my time there, they will confirm that the allegations against me are untrue, and that I served the interests of the entire Stanford Jewish student community with diligence and love,” Silverstein said.

Yisroel Quint, an undergraduate senior at Stanford, said that while he “can’t directly dispute” the alums’ claims, Eisenberg “is an excellent, attentive leader. She has always offered and provided any support that I could possibly need at Stanford to be a strong supporter of Israel…I have worked closely with the rabbi against the BDS movement on campus.”

The challenge J Street poses to mainstream pro-Israel students is not unique to Stanford. The progressive advocacy group and its campus arm tout their participation in the fight against BDS, yet partner on programming with pro-BDS groups.

Hillel, by contrast, states in its Israel guidelines that it will not partner with organizations that “delegitimize, demonize, or apply a double standard to Israel.” But when Hillel partners with J Street, what sounds like a firm policy can become a slippery slope.

J Street has hosted Breaking the Silence—an NGO claiming the Israeli military engages in “crimes against humanity” and accusing Israel of “ethnic cleansing”—at the Hillel facilities of Columbia University, Harvard University, University of Pennsylvania and Washington University in St. Louis.

“J Street, in our observation—and we’re working on 70 campuses—damages healthy, normal pro-Israel work, especially when the group is closely involved with the Hillel, as it is in some places,” said Andrea Levin, executive director of the Committee for Accuracy in Middle East Reporting in America. “It often obstructs the wider effort to speak out for Israel on the facts and can demoralize pro-Zionist students.”

Looking back and ahead

Horwitz does not consider her experience at Stanford an indictment of Hillel International, the student movement’s parent group, and still holds the organization in high regard. She acknowledges that “each [Hillel] chapter is a reflection of the staff on [that] campus.” Horwitz even applied for multiple post-graduation jobs with Hillel, including one at Stanford, with the hope of changing the climate.

Pollock, however, does not hold back in her criticism.

“I find it very unfortunate that Hillel rabbis and staff behaved in such an unprofessional, unsupportive, anti-Israel fashion,” she said of her time on campus. “I find it extremely unfortunate that I have zero positive experiences at Stanford Hillel to speak of.”