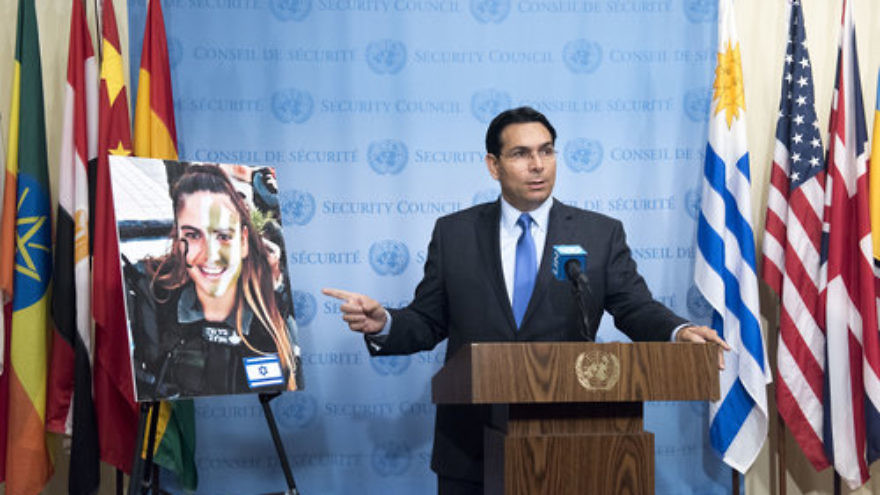 For most countries, the United Nations body UNESCO is a relatively innocuous organization, dedicated to preserving some of humanity’s most important cultural treasures as well as promoting scientific and educational collaborations between nations.

But for Israel, UNESCO has become the latest venue for attempts by its detractors, namely the Palestinians and their supporters, to deny fundamental aspects of Jewish heritage.

During the UNESCO World Heritage Committee’s 41st annual meeting last week in Krakow, Poland, the U.N. body approved a resolution denying Israel’s sovereignty in Jerusalem’s Old City—which includes the Temple Mount, Judaism’s holiest site—as well as a resolution declaring Hebron’s Cave of the Patriarchs, where the biblical Jewish matriarchs and patriarchs are believed to be buried, as an endangered Palestinian heritage site.

These latest resolutions dovetail with previous anti-Israel measures passed by UNESCO in May and late last year. At the same time, the Jewish state has seen steadfast support from the new Trump administration, and is strengthening economic ties with emerging powers in Asia and Africa. As such, do the most recent anti-Israel UNESCO resolutions even matter?

Israeli Ambassador to the U.N. Danny Danon told JNS.org that UNESCO’s attempt to sever ties between Israel and Hebron have no practical implications for Israel, saying the latest resolutions are “shameful and offensive” and eliminate “UNESCO’s last remaining shed of credibility.”

“The Palestinians understand that their chances to pass anti-Israel resolutions in more significant international bodies has diminished over the past few months, so they seek out declaratory anti-Israel measures and meaningless so-called ‘diplomatic victories,’” Danon said.

While the UNESCO votes may not provide any practical concerns for Israel, they do carry several negative implications, according to Michal Hatuel-Radoshitzky, a research fellow for Israel’s Institute for National Security Studies.

“First, they serve to weaken UNESCO’s credibility and mandate to perform its mission, and further erode the U.N.’s very negative image among Israelis,” Hatuel-Radoshitzky told JNS.org. “Second, they serve to cultivate the common Israeli perception that the world is against us, further fueling fear, and strengthening hardliners opposed to any compromises which will ultimately be needed to reach an Israeli-Palestinian peace agreement.”

According to Hillel Frisch, an expert on Palestinian and Islamic politics at the Begin-Sadat Center for Strategic Studies, the UNESCO resolutions are part of a larger strategy of employing legal discourse in the political battle to delegitimize Israel.

“The strategy is aptly called lawfare, which has nothing to do with proper legal matters and proceedings,” Frisch told JNS.org, explaining that the Palestinian goal “is to engrain in the world community the idea that the major sites of Judaism is in the ‘occupied Palestinian territories,’ a term which never appeared in the key documents concerning the Israeli-Arab-Palestinian conflict.”

By combining this strategy with the UNESCO resolutions, Frisch explained, the Palestinians achieve the goal of “appearing as a state that is opposed by a foreign occupation that has nothing spiritually to do with the area—in other words, a colonial entity that will disappear as the other foreign colonial powers disappeared in the past.”

Despite Palestinian efforts to isolate Israel, the Israeli government has devoted significant resources to expanding relations outside of its traditional allies in Europe and North America, with a focus on improving ties with Africa and Asia as a buffer to the entrenched anti-Israel hostility found elsewhere, especially in the U.N.

Netanyahu has made several historic trips during the past year to these regions, including a visit to four nations in eastern Africa last year, the Asian Pacific region last winter, and more recently to Liberia in western Africa in June. Last week, India’s Prime Minister Narendra Modi made the first-ever visit to Israel by a sitting Indian head of state, while notably skipping a concurrent visit with Palestinian Authority President Mahmoud Abbas.

“There is no doubt that Israeli foreign relations are improving steadily,” Danon said. “We saw an excellent example of this with Prime Minster Modi’s visit to Israel. We see it here at the U.N. as well. We are also making inroads with individual countries.”

Recently, Danon accompanied several U.N. ambassadors on a tour of Jerusalem’s Old City and the City of David archaeological park.

“Over the past year, I’ve accompanied over 30 U.N. ambassadors on trips to Israel,” he said. “The more they see of our country firsthand and learn about the complicated situation in our region, the more they appreciate the many challenges that we face.”

This outreach and relationship-building has already paid dividends for Israel in the U.N. Last year, Danon became the first Israeli elected chair of a permanent U.N. committee (the Legal Committee) after 109 countries voted for him. This fall, Danon will begin serving a term as a deputy president of the U.N. General Assembly.

“We will continue to work for full acceptance in every U.N. agency and forum,” he said.

Given the progress Israel has made in cultivating new allies and deepening ties with existing ones, Danon is optimistic relations will improve between Israel and the international community, but promises to still fight anti-Israel resolutions at the U.N.

“There is no doubt that there is positive movement in international institutions over the past few months,” he said, “but we refuse to accept any resolution or decision which categorizes the Jewish state as the ‘occupier’ of the Western Wall.”