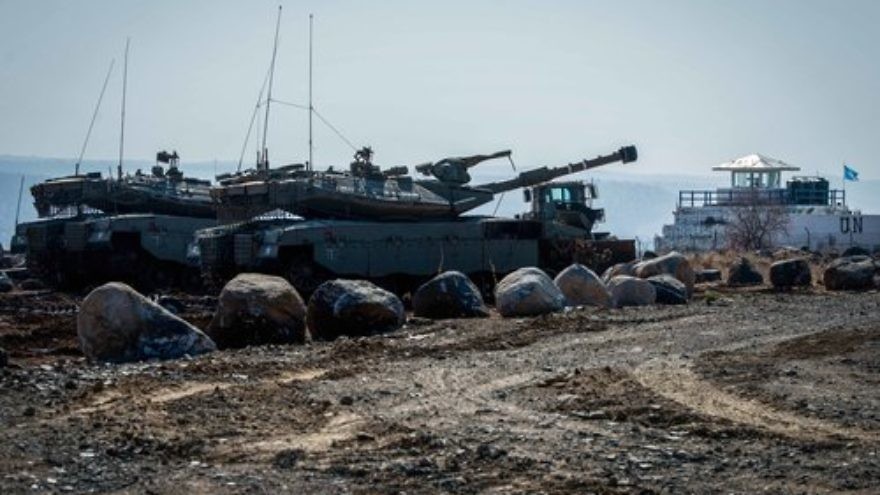 The Israel Defense Forces patrols the Israeli-Syrian border in the Golan Heights on Nov. 27, 2017, after the Islamic State shot over the border into Israel. Credit: Basel Awidat/Flash90.
Republish this article
927 WORDS
Spread the word.
Help JNS grow!
Share now:

(December 6, 2016 / JNS) The recent attention-grabbing exchange of fire between Israel and Islamic State is just one aspect of the Jewish state’s assessment of the current threats at its northern border with Syria.

Israeli forces killed four fighters from the Islamic State-affiliated Yarmouk Martyrs Brigade Nov. 27 after the terrorists had fired at Israel Defense Forces (IDF) soldiers in the Golan Heights border region. The exchange drew significant attention because it was the first report of an Islamic State attack on Israel from Syria.

Islamic State has previously threatened Israel, but until now the terror group did not appear to open such a front at the Israel-Syria border. Yet despite the numerous news headlines that followed the Islamic State attack, the Yarmouk Martyrs Brigade does not have nearly as large of a footprint in the region as Hezbollah or its patron, Iran, which have been increasing their presence in Syria to back President Bashar al-Assad’s regime in that country’s civil war.

The IDF estimates that about 120,000 Hezbollah rockets are aimed at Israel. Hezbollah has a full-blown army with around 45,000 members, 21,000 of whom are regularly in service, Haaretz reported in July. By contrast, the Yarmouk Martyrs Brigade has between 600 and 1,000 fighters, according to a report in The Economist in January. The report quoted Israeli officers as calling the brigades “Daesh lite,” using an alternative name for Islamic State.

Given that Hezbollah’s forces amount to a far greater security threat to Israel, the Islamic State attack may have been no more than an effort by the jihadist group to distract from its losses in Syria and Iraq.

Israeli Deputy Regional Cooperation Minister Ayoub Kara (Likud) told JNS.org that three groups—the al-Qaeda linked Nusra Front, the Western-backed Free Syrian Army, and Islamic State—are struggling for control of the area near Israel’s border. These groups “sometimes fight each other,” Kara said. Three enemies of Israel—the Syrian army, Hezbollah, and Iran—are on the other side of Syria’s civil war, he noted. Besides the rebel group led by Syrian opposition leader Kamal al-Labwani, “all of these groups in the area are against us,” said Kara.

“Islamic State is trying to get close to our border to attack in order to gain popularity,” asserted the deputy minister. But he added, “Islamic State, Assad, Hezbollah, and Iran have no interest right now in getting Israel involved.”

Syrian rebel leader Labwani told JNS.org that there is “chaos” on the Syrian side of the Golan Heights.

“We need to create one authority,” said the rebel activist, who has many sources on the ground in the area.

Speaking from Sweden, Labwani claimed that Hezbollah could have been behind the Nov. 27 attack rather than Islamic State. Hezbollah is paying rebels to carry out attacks on Israel, he claimed. Israel’s Kara, however, maintained that Islamic State carried out the recent attack.

Labwani, who snuck out of Syria in 2012 and who has visited Israel, has supported the implementation of a safe zone that buffers Israel’s border with Syria, though he admits that such a move would need to be approved by the U.S. and/or Russia.

Asked how the southern Syrian region is fairing from Israel’s perspective, Labwani responded that the situation is manageable, but that the Jewish state should be more proactive in bringing about the safe zone.

Mendi Safadi, an Israeli Druze political activist who has traveled in the region and met with leaders of Syria’s opposition, said the Yarmouk Martyrs Brigade was responsible for the Nov. 27 attack and that the brigade is comprised of Syrian Palestinians.

“Yarmouk is not a typical Islamic State group, but has taken advantage of the popularity of Islamic State in order to raise funds,” said Safadi, adding that this represents another example of the radicalization of Islamist groups.

He added, “Yarmouk’s abilities are limited compared to the core Islamic State [organization], but they presumably will continue operations against Israel unless Israel launches pre-emptive strikes.”

Moti Kahana, an American-Israeli businessman and founder of the American Jewish NGO Amaliah, which delivers humanitarian supplies to Syrian civilians, said that because of the humanitarian crisis in the southern province of Quneitra bordering Israel, the Nusra Front and Islamic State have sought to provide aid to win the hearts and minds of the Syrian population.

Amaliah is the only organization delivering aid to Syrians from the Golan Heights in coordination with the IDF. Syrian women and children are also being brought into Israel for medical treatment. Kahana said his group is stepping up funding for aid because “if we don’t bring humanitarian supplies to the area, radicals will fill the vacuum.” He worries that if President-elect Donald Trump’s incoming administration stops U.S. support for Syrian rebels, Islamist-supporting Qatar would step in, emboldening the Islamist nature of the Syrian opposition.

Indeed, Qatari Foreign Minister Sheikh Mohammed bin Abdulrahman al-Thani told Reuters last month that if the U.S. cuts funding for the rebels, Qatar’s support for rebels “is going to continue, we are not going to stop it.”

Kahana is a Democrat who explained that for the past four years, he tried to get the Obama administration to implement safe zones in Syria, but got no support. Now, Kahana is optimistic about the Trump administration’s Syria policy because Trump himself has voiced support for safe zones.

“The Trump administration does not want Syrians coming to America, but for them to stay in their country,” Kahana told JNS.org. “And the only way to do this is by creating safe zones.”