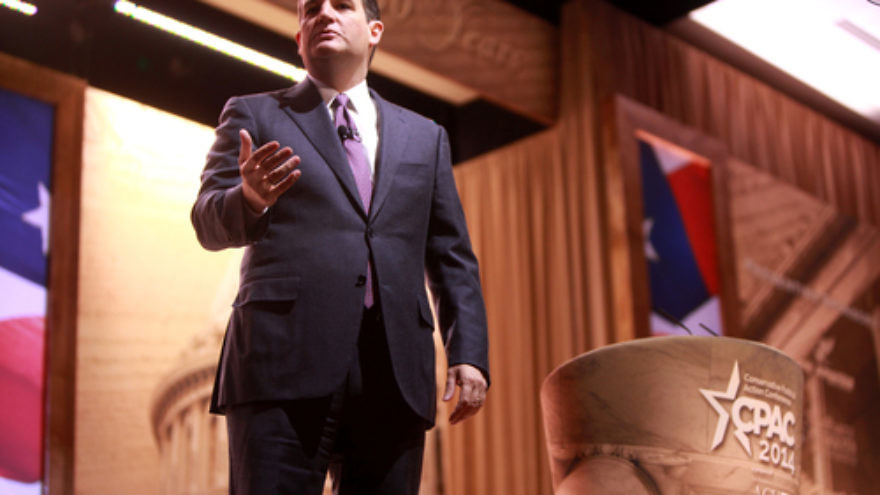 A prominent Republican senator considered by many to be a contender in the 2016 presidential election has embarked on a foreign policy push of late, with a strong focus on Israel and the Jewish community.

U.S. Sen. Ted Cruz of Texas, a Tea Party favorite, recently returned to the Capitol after a tour of Europe and the Middle East with Secure America Now, including a two-day stop in Israel, where he met with Prime Minister Benjamin Netanyahu, members of the Knesset, and Israeli defense leaders.

“I went this time because the national security threats to Israel and to the United States have never been greater than they are right now,” Cruz told JNS.org when asked about the purpose of his recent mission. “In particular the threat of Iran acquiring nuclear weapons capability. It was striking… [that when] I met with a number of senior leaders across the Israeli government, there was complete consensus across party lines in Israel from every single person with whom I met that, number one: the prospect of Iran acquiring a nuclear weapons capability is the gravest national security threat in the world and to the nation of Israel; and number two: that the current deal being negotiated with Iran is a very, very bad deal and is a historic mistake.”

While on the trip, Cruz made headlines by laying out his foreign policy positions regarding Israel during a speech to the Knesset. Cruz unequivocally blamed the Palestinians as being solely responsible for derailing the recent round of peace talks and blasted Secretary of State John Kerry and the Obama administration for criticizing Israel over settlement plans.

“I don’t think the United States should attempt to dictate the terms of peace,” Cruz told JNS.org. “Nobody wants peace more than the nation of Israel. Israeli mothers and fathers love their children and want them to live in a peaceful land. But I don’t believe a peaceful solution is remotely likely unless and until the Palestinians, number one, acknowledge Israel’s right to exist as a Jewish state; and number two, renounce terrorism, and [in] my view, Israel is a sovereign nation and is entitled to make its own determinations about how best to achieve peace in Israel.”

“If America can help provide a neutral forum, a venue for positive negotiations, then we should do so,” he said. “But the American president should not demonstrate arrogance in trying to dictate the terms of any solution for peace.”

Cruz continued his Israel push Sunday, June 1, addressing around 10,000 attendees at the Israel Day Concert in New York City’s Central Park. Later that day, he headlined a fundraising dinner sponsored by the bipartisan, pro-Israel political action committee NORPAC. The event was held at Abigael’s Restaurant with a $1,000 minimum donation per guest, raising a total of around $800,000 for Cruz’s campaign coffers, according to estimates.

“He has terrific in his ability to be articulate,” Chouake said. “He’s not only issue oriented but he’s very factually oriented; he tends to be very well researched.”

Chouake also voiced his support for the senator’s statements on settlements, noting that it doesn’t make Cruz against diplomacy.

“Look, Judea and Samaria is the heartland of Israel, historically,” he said. “The Palestinians have been building; the Israelis are building. If they have an agreement, you stick with the agreement; if you have no agreement, it’s basically disputed territory and you do what you do to benefit your people.”

Speculation about Cruz’s motives on the trip emanated from both sides of the aisle, since he is considered a likely presidential candidate in 2016.

The self-labeled “pro-Israel, pro-peace” lobby J Street did not miss a beat in attacking Cruz’s trip, chiding the senator in its own fundraising email.

“Now the presidential hopeful is on the ground in the Holy Land and once again doing his best to pander to the far right elements of the pro-Israel community,” said the letter from J Street President Jeremy Ben-Ami. “Apparently Cruz thinks the path to the White House runs through Judea and Samaria. But you and I know better. Poll after poll affirms that pro-Israel activists support US efforts to broker a two-state deal.”

At least one Jewish organizational leader framed Cruz’s trip in terms of it being a safe move among voters aligned with the GOP base: The pause in peace negotiations between the Israelis and the Palestinians allows politicians to make statements without fear of choosing between sides and, more than two years before the next presidential election, it’s clear that legislators are less influential in crafting foreign policy than the White House.

But even groups on the right, such as the Republican Jewish Coalition (RJC), have been hesitant to fully back Cruz, preferring instead more establishment candidates like New Jersey Gov. Chris Christie and Texas Gov. Rick Perry. At the RJC’s annual leadership retreat in Las Vegas earlier this year, Cruz was not among the invited slate of potential 2016 candidates.

The RJC did not respond to a request for comment.

Texas businessman and Republican activist Fred Zeidman, who said he is close to Cruz, believes that the gap between the senator and the established Republican Jewish community is most likely the result of Cruz’s novelty on the foreign policy scene, but is gradually shrinking as they learn of his positions.

“You never know what somebody can do until they get in office,” said Zeidman. Cruz, he added, “was new to the game and he was running against a guy (Lt. Gov. David Dewhurst) who had a very long-term demonstrated record and was a major philanthropist to the state of Israel.”

Zeidman, who has known Cruz since working with him on the George W. Bush presidential campaign in 2000, said he never had any reason to worry about the senator’s devotion to the state of Israel or the Jewish community before he ran, and in his view, the legislator has lived up to that expectation.

Cruz’s grassroots appeal is among the worries facing Jewish establishment organizations, including his non-compromising domestic policy positions that included supporting the federal government shutdown earlier this year—putting him at odds with the GOP establishment, business leaders, and many of his Senate colleagues.

“He’s an ideologue but he’s brilliant and I think he unequivocally understands the need to get things accomplished and accomplishment does take compromise,” said Zeidman. “I think to the extent that he doesn’t have to compromise his principals, he will do what he needs to do to make things happen because being ideologically committed to nothing happening, never works, or always works—nothing happens.”

Rabbi Yitzhok Tendler, co-founder of the Young Jewish Conservatives (YJC), agreed with Zeidman in that he thinks Cruz isn’t just trying to pander to donors.

“I think what’s unique about it is that he is probably the most articulately anti-Palestinian intransigence senator out there right now,” said Tendler. “He’s a guy who’s deeply inspired by the ideal of freedom—from my interactions with him, this is a big deal for him. He’s an ideological purist and he doesn’t mind speaking his mind even if it might be unpopular.”

Tendler said that he first met Cruz when he came to address YJC members at their inaugural Shabbat dinner held during the Conservative Political Action Conference in early 2012.

“Back then he wasn’t even a senator and he was passionate about it, so I think it’s sincere. I don’t think there’s any ulterior motive,” he said. “I mean some of it might be religiously based, but he doesn’t strike me as an evangelical fanatic, so I don’t think that’s where it comes from.”