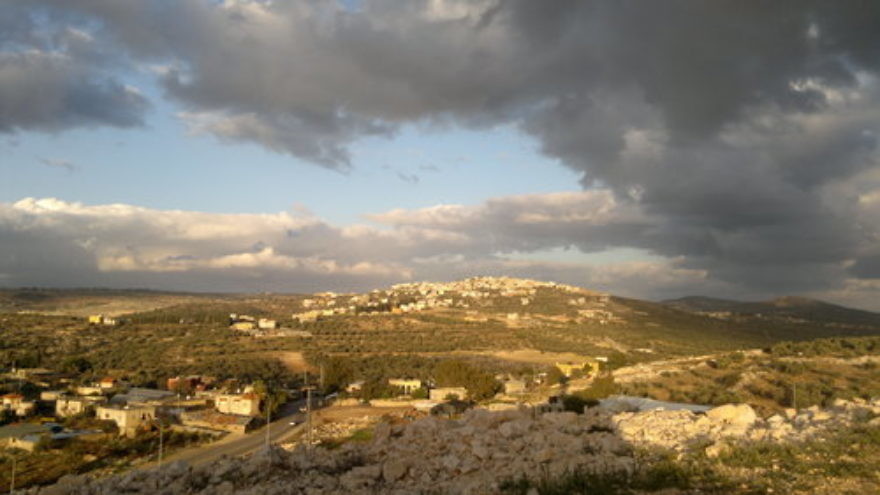 A view of the Palestinian Authority-ruled city of Ya'bad, which is at the center of an Israeli-Palestinian dispute on air pollution. Credit: Wikimedia Commons.
Republish this article
853 WORDS
Spread the word.
Help JNS grow!
Share now:

Important government action was taken to protect the environment in the Middle East this week. But don’t expect the government in question to get any credit—because it was the Israeli government that took the action, and the Palestinian Arabs who were the polluters. And the Palestinians, as we all know, are immune from international criticism.

The Israeli authorities repeatedly alerted the Palestinian Authority (PA), over the course of several years, about a charcoal factory in the PA-ruled city of Ya’bad that was causing serious air pollution in the area. The Israelis made it clear that if the PA did not act, Israel would have to intervene.

The primary victims of the Ya’bad pollution were, of course, the Palestinian residents of Ya’bad and nearby villages. Israeli officials even pointed out to the PA that the area’s residents suffer a disproportionately high rate of respiratory problems because of the smoke. So you would think the PA would take action for that reason alone. But the PA has no interest in protecting the environment. So it ignored the Israeli warnings.

PA officials no doubt assumed—based on plenty of previous experience—that if Israel acted, then the State Department and J Street and The New York Times would accuse Israel of “intruding on Palestinian territory” and “driving Palestinian industrialists out of business.” The PA also probably calculated that the various branches of the Green Party around the world are so locked in to a radical-left, pro-Palestinian worldview that they will never speak out against Palestinian pollution. And, so far, that appears to be the case.

Israel’s patience with the Ya’bad air-poisoners was finally exhausted Wednesday. Israeli police shut down the factory and confiscated its production equipment. Instead of thanking the Israelis for protecting the environment and saving Palestinians from lung cancer, PA officials immediately denounced the Israeli action. The PA’s governor for the Jenin district said the Israeli action was the latest example of “Israeli policies of confiscating lands and imposing tightened measures against Palestinian people.” He threatened that Israel’s rescue of Palestinians from toxic air pollution will “strengthen our determination to keep our lands and achieve our national goals.”

The Palestinian news agency Ma’an reported that “Palestinians whose livelihoods depended on the charcoal factory called on human rights organizations to intervene and stop Israeli obstruction of their businesses.” I’m surprised that Palestinian doctors and hospital administrators haven’t joined the protests; after all, the smoke from the factory was giving them a steady supply of patients.

Lest one think the Ya’bad episode was some isolated occurrence, note that just two weeks ago, Ynet (the news website of the Israeli newspaper Yedioth Ahronoth) reported there has been “a significant amount of pollution in the Alexander River over the past week, the source of which appears to be waste from Palestinian olive harvests in the West Bank. Similar signs of pollution were spotted in the river last year.”

An eyewitness said people walking on the path alongside the river noticed “a stink all along the path whose origin couldn’t be explained. We thought at first that the source of the smell was from still water and the surrounding orchards. But it all changed when we reached the turtle bridge. There were no turtles. And to our shock, we saw dozens of dead fish and black water; a real horror…It looked like they poured oil into the river and all the fish there died. It’s sad to see nature die in front of your eyes like that.”

Ynet noted the Israeli government has “invested significant resources in restoring the state of the Alexander River, a river with large populations of fish, turtles and other aquatic creatures, [but] each year, waste from the seasonal olive harvests in the West Bank flows into the river, leading to the deaths of fish and other animals, along with causing foul odors. In addition, the pollutants may put plant life along the river’s banks in danger.”

The Israeli government will no doubt be forced to act against the Palestinian river-polluters just as it acted in Ya’bad. And the Palestinians will no doubt claim they are being “persecuted.” Hopefully the Israelis will ignore that criticism and keep doing the right thing for the environment.

But just imagine, for a moment, if the PA was a sovereign state of “Palestine,” as supporters of the Palestinian cause are demanding. Any attempt by Israel to act against pollution emanating from the Palestinian side of the border would constitute a violation of another country’s national sovereignty. The Israelis would not only be condemned, but could face international sanctions. Israel’s air would fill with toxic smoke from Palestinian charcoal factories, Israel’s rivers would be a dumping ground for olive-harvesters’ waste, and Israel would be helpless to stop it. Is that really the kind of future we want for the Jewish state?