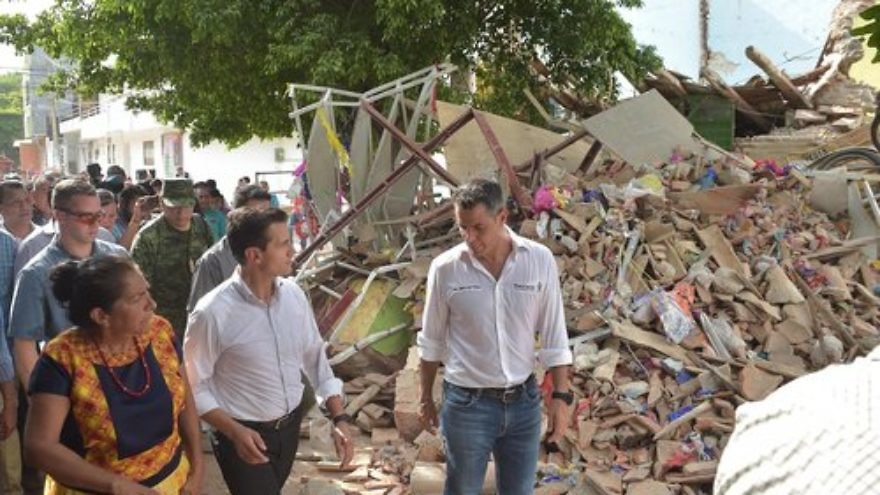 “Mexico and Israel enjoy close and friendly relations. Naturally, this finds its expression in moments of need, such as the terrible earthquake in Mexico,” Foreign Ministry spokesman Emmanuel Nahshon told JNS.org. “Our embassy will coordinate the assistance distribution with the local authorities.”

The 8.2-magnitude earthquake—the strongest to hit Mexico in a century—struck 75 miles off the country’s Pacific coast around midnight last Thursday, causing tremendous damage in southern Mexico and prompting officials to issue a tsunami warning along the Central and North American coastline. Tens of millions of Mexicans, and others in neighboring Guatemala, were rocked by tremors from the powerful earthquake.

“As you know, Mexico experienced a severe earthquake over the weekend. Israel sends condolences to the families of the victims,” Netanyahu said at the start of Sunday’s weekly Israeli cabinet meeting.

“We understand that these are difficult days for this country, for the Mexican people. In my talks with the president of Mexico, we will offer aid in reconstruction or any other assistance that we can give,” he said.

The Israeli Embassy in Mexico and the Foreign Ministry’s center for international cooperation will coordinate the delivery of aid to the southern Mexican states of Oaxaca and Chiapas, two of the areas most severely affected by the deadly earthquake. Among the 90 people confirmed dead in the quake’s aftermath, 71 were from Oaxaca.

A diplomatic team from the Israeli embassy, headed by Israeli Ambassador to Mexico Yoni Peled, will distribute aid packages to the governors of the affected states in the coming days, according to the Foreign Ministry.

In addition to the state assistance, the Israeli humanitarian organization iAID (formerly known as IsraAID) is sending a 12-member delegation to earthquake-affected areas in southern Mexico; iAID recently assisted Houston in the wake of Hurricane Harvey.

Netanyahu travels to Mexico Wednesday, in the first visit to the region by a sitting Israeli prime minister. He will meet with Mexican President Enrique Pena Nieto as well as leaders of the local Jewish community.

During his trip, Netanyahu will also visit Argentina and Colombia, and will meet with Paraguayan President Horacio Cartes in Buenos Aires.

In Argentina and Mexico, the prime minister will be accompanied by a large business delegation comprised of representatives from several Israeli companies in the fields of agriculture, water, communications and energy, in a move expected to enhance reciprocal economic relations between Israel and those countries.

Israel is Mexico’s largest trade partner in the Middle East, with bilateral trade amounting to $700 million in 2016.

“This visit will strengthen our economic, security and technological ties with Latin America and it constitutes a continuation of the strengthening of Israel’s international position, a systematic process that we are successfully leading,” said Netanyahu.

The prime minister’s trip to Latin America is part of a broader effort to improve ties with non-traditional allies, such as African and Asian countries. The Israeli leader’s arrival in the region is also deeply significant for Latin American Jews.

“Netanyahu’s visit is an important instance in the strengthening of bilateral relations between Israel and Latin American countries,” Claudio Epelman, executive director of the Latin American Jewish Congress, told JNS.org.

“In Latin America there are many Jewish communities, all very different from each other, big and small, but they all share a great affection for the state of Israel,” Epelman said. “This is without a doubt an incredible opportunity for dialogue.”