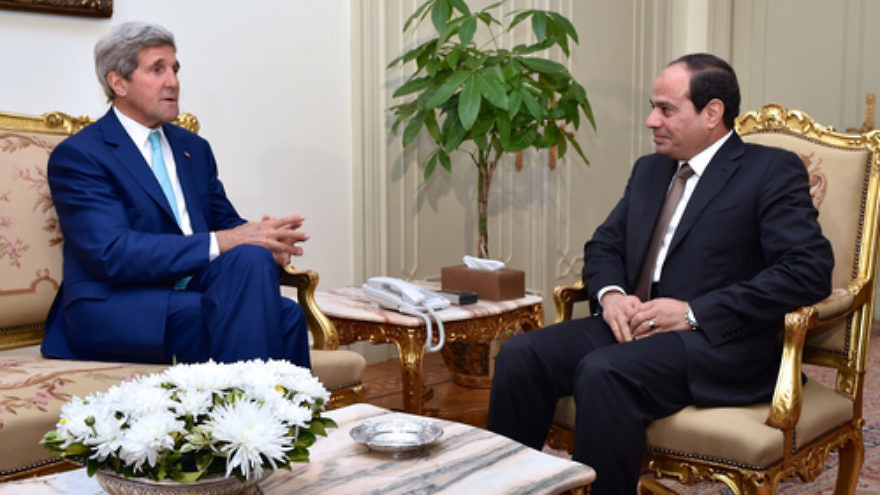 (June 8, 2015 / JNS) As the Middle East grapples with the fallout of the so-called “Arab Spring” revolutions and the rise of terror groups like Islamic State, Arab states have sought increased cooperation with Israel in areas such as military and intelligence in order to confront ongoing threats. But will this cooperation, particularly when it comes to Egypt, lead to deeper Arab normalization of bilateral relations with the Jewish state?

On May 28, prominent Egyptian historian Maged Farag drew headlines when he called for his country to normalize relations with Israel and to ditch support for the Palestinian cause, which he said has caused “nothing but harm” for Egypt.

According to a report by the Middle East Media Research Institute (MEMRI), which translated Farag’s appearance Egypt’s Mehwar TV, Farag called on his fellow countrymen to leave “the old ideology and cultural heritage on which we were raised”—referencing the rampant anti-Semitism among the Egyptian population—and to embrace Israel out of national interests.

Does Farag’s statement represent a new realization among Egyptians against the backdrop of new threats, or does rampant societal anti-Semitism and anti-Zionism still constitute a barrier to normalizing ties with Israel?

“Anti-Semitism is extremely widespread in Egypt, to say the least,” Samuel Tadros, a senior fellow at Hudson Institute think tank’s Center for Religious Freedom, told JNS.org. “It is probably the only ideological component that all Egyptian factions agree on, whether you are Islamist, secular or even those that the West describes as liberals and democrats.”

“It is the common language of Egypt,” Tadros added.

It is necessary, Tadros believes, to “differentiate between society at large with widespread anti-Semitism, and the geopolitical realities and security situation that have led the Egyptian government to cooperate with their Israeli counterparts.”

According to noted foreign affairs commentator Walter Russell Mead, anti-Semitism “is both a cause and a consequence of a basic failure to comprehend the way pluralistic and liberal societies behave.”

Mead argues that “as a result, nations and political establishments warped by this hatred tend to make one dumb decision after another-starting at shadows, warding off imaginary dangers, misunderstanding the nature of the problems they face.”

Like many other Muslim nations in the Middle East, Egypt’s media is dominated by wild anti-Semitic conspiracy theories, and books such as the anti-Semitic “The Protocols of the Elders of Zion” fabrication remain a bestseller.

While many Islamic extremists today interpret Quranic verses and Hadiths to justify their anti-Semitism, and others, mainly on the political left, blame the creation of Israel for the rampant anti-Semitism of today, experts say the roots of modern Muslim anti-Semitism go deeper.

According to Tadros, anti-Semitism is linked to “both the crisis of modernity in the Arab world and the importation of European ideologies and ideas,” especially the anti-Semitism of the Nazis, which had an impact on the founder of modern Egypt, Gamal Abdel Nasser.

As a result, anti-Semitism in Egypt and elsewhere in the Arab world can be classified as a form of escapism, in which Arab leaders and their societies at large have used anti-Semitism to deflect their own failures to modernize and catch up with the rest of the world.

“It enables them to not take responsibility for their own failures and misery that they have inflicted upon themselves,” Tadros told JNS.org.

“Naturally, Egyptians cling to the most appealing and widespread ideology by blaming the Jews or Israel for everything that is going wrong in the region,” he said.

Yet unprecedented events over the last few years have transformed the region, as Arab states are increasingly forced to confront the growing Islamic extremism that seeks to overthrow their governments. Egypt in particular has been faced with a widespread uprising in the Sinai Peninsula, led by terrorists who have aligned themselves with Islamic State.

At the same time, Egyptian President Abdel Fattah El-Sisi has led a charge against the Muslim Brotherhood, which briefly held power in Egypt until being ousted by El-Sisi in the summer of 2013. Confronting both the Sinai terrorists and the Muslim Brotherhood, which is the parent organization of the Gaza-ruling Palestinian terror group Hamas, is El-Sisi’s top priority.

The same issues are felt elsewhere in the region, especially by Gulf Arab states who fear the growing threat of a nuclear Iran as well as Iranian influence in the ongoing wars in Syria, Iraq, Yemen, and Libya.

In a Jan 1. speech at Egypt’s Al-Azhar University, El-Sisi declared an ambitious plan for a “revolution” in Islam to tackle these threats, in order to reform a religion he believes has made the Muslim world a source of “destruction” that is “making enemies of the whole world.”

El-Sisi’s vision includes purging Islam of extremist intolerance and violence, elements that terror groups like al-Qaeda and Islamic State use as recruitment tools.

The Egyptian leader has also found common ground with Israel by targeting Hamas, destroying more than 1,600 tunnels and creating a buffer zone near Egypt’s border with Gaza.

In an interview in March with the Washington Post, El-Sisi stated that he speaks to Israeli Prime Minister Benjamin Netanyahu “a lot” and that the “hostile mood and skepticism have diminished with peace with Israel.”

El-Sisi has been praised by many supporters of Israel, who view him as an important ally in maintaining Egypt’s 1979 peace treaty with the Jewish state, fighting Islamic terrorism, and confronting Iran.

“Sisi is very good, that is one of the very good things that are happening [in the Middle East]. He’s so much better than [former Egyptian president Hosni] Mubarak even was and certainly than [ex-Egyptian president and Muslim Brotherhood leader Mohammad] Morsi,” U.S. Sen. Chuck Schumer (D-N.Y.) recently said in a speech to Jewish supporters.

El-Sisi “has no options but to cooperate with Israel,” Tadros told JNS.org.

“The Sinai is a complete mess, the Egyptian military has failed miserably to quell or control the insurgency in the Sinai,” he said. “Ironically it is the Israelis, who only controlled the Sinai from 1967 to 1982, who have a better grasp of the region than the Egyptians do, who neglected it for decades.”

In many ways, El-Sisi’s cooperation with Israel mirrors that of Mubarak, the deposed former president, who during his nearly 30 years in power maintained a close government-to-government relationship with Israel.

But El-Sisi’s policy has one key distinction from that of Mubarak, in that the current president has avoided meeting publicly with Israeli officials.

“Mubarak maintained an odd formula. He would allow his media to attack Israel, publish anti-Semitic articles, etc. … but would also be photographed with Israeli officials. This caused a big problem for him and confused the public,” Tadros said. By conrast, El-Sisi “is not being publicly seen with Israelis, so that is protecting him from the public for being too close to Israel,” he said.

Nevertheless, El-Sisi’s enemies have used anti-Semitism to defame him, claiming his mother is a Moroccan Jew named Malika Titani. Similar theories have been published about the founder of the Muslim Brotherhood, Hassan al-Banna, being a Jew.

“Both sides in Egypt use anti-Semitism to criticize their opponents,” Tadros said.

As such, while geopolitical realities have led to unprecedented military and intelligence cooperation between Egypt and Israel, anti-Semitism in Egyptian society at large may prevent any further normalization with the Jewish state in the near future.

“One of the most prevailing conspiracy theories following the fall of the Muslim Brotherhood was that the Muslims Brotherhood was cooperating with Israel and the United States in order to give the Sinai to Hamas,” he added. “Rationally that makes little sense, but that is how prevalent the cancer of anti-Semitism is in Egyptian society.”