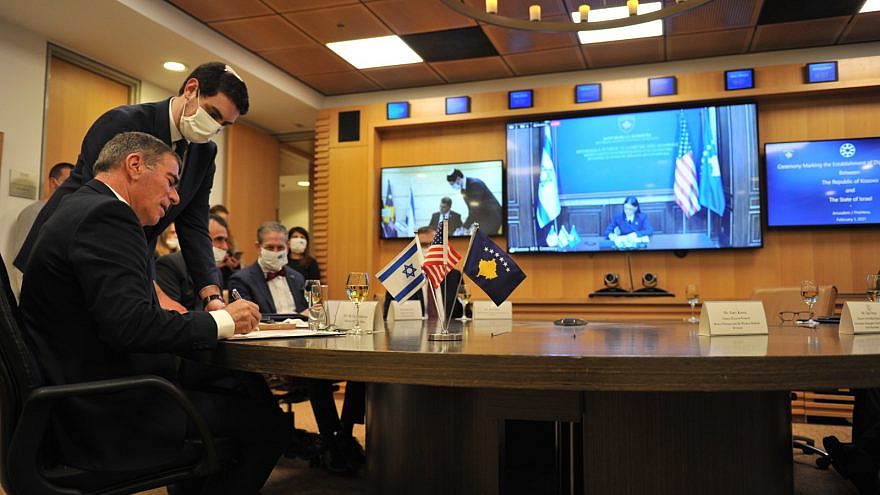 (February 1, 2021 / JNS) Israel and Kosovo officially established diplomatic relations on Monday in a ceremony held via Zoom due to the ongoing coronavirus pandemic.

Israel’s Foreign Minister Gabi Ashkenazi signed the agreement, which was then scanned and sent to his counterpart in Kosovo, Meliza Haradinaj-Stublla, who was joined by representatives of Kosovo’s Jewish community for the event. The foreign ministers signed two cooperation agreements: one to establish their diplomatic ties and the other related to the activities of Israel’s international development agency Mashav.

“The establishment of relations between Israel and Kosovo is an important and moving historical step that reflects the many changes the region has experienced in recent months,” said Ashkenazi. “Today, Kosovo officially joins the circle of countries that aspire to peace and stability and recognize Israel, and Jerusalem as its capital.”

Kosovo becomes the latest Muslim-majority country to recognize Israel, following the U.S.-brokered Abraham Accords with several Arab states in the fall of 2020.

Kosovo also agreed to open its embassy in Jerusalem, becoming the third nation to do so after the United States and Guatemala. In the ceremony, Ashkenazi unveiled a sign that will be placed at the entrance of the Kosovo embassy when it opens, possibly in March or April.

The normalization deal stems from a larger one agreed to last September that was part of a Serbia and Kosovo economic agreement by the Trump administration.

Israel becomes the 117th country to formally recognize Kosovo, which has fought its own battle for international independence from Serbia.