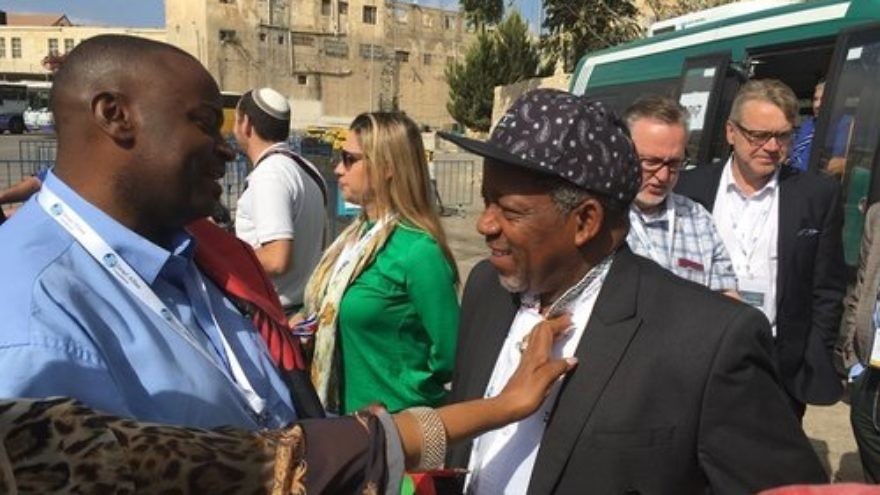 (October 20, 2016 / JNS) JERUSALEM – Israel could have done a better job of enlisting Christian allies in its efforts to prevent the United Nations from passing a resolution erasing the Jewish connection to the Temple Mount and Western Wall, one South African legislator claims.

Speaking with JNS.org in Hebron Wednesday, MP Kenneth Meshoe, of the African Christian Democratic Party, alleged that Jerusalem was slow in mobilizing its allies across the world which prevented organizing a grass roots campaign on its behalf.

“If many of these countries knew beforehand what was going to happen, their members on the ground, their population would have said, ‘Our position is we need to defend the right of Israel to be recognized as having a legitimate right to be in Jerusalem,’” he said. “It was a mistake for the Israeli government to be slow in informing the Christian population what was happening.”

This week, the United Nations’ Educational, Scientific and Cultural Organization (UNESCO) passed a resolutioncondemning Israeli actions on the Temple Mount, “including the so-called ‘Israeli Antiquities’ officials.” The resolution, which was condemned by the United States and other countries and caused Israel to cease cooperation with the international body, only referred to Temple Mount and the Western Wall by their Arabic names, effectively erasing their Jewish past.

The resolution, while reaffirming that the sites are important for all three monotheistic faiths, refers to the Tomb of the Patriarchs in Hebron and Rachel’s Tomb in Bethlehem as Palestinian sites, naming Rachel’s Tomb specifically as a mosque.

While Israel reached out to the Vatican, attempting to gain support in lobbying UNESCO members, and to evangelical groups, the efforts were not effective, according to Israeli media reports.

“I think they need to be more proactive,” said Meshoe, who visited Hebron and Jerusalem on a solidarity tour of international lawmakers this week. “They need to inform their Christian allies more in time so they can organize themselves, they can instruct those in the U.N. what to say and what not to say.”

Israel began its efforts several years ago by reaching out to Christians with the establishment of a Knesset caucus, its director Josh Reinstein told reporters. Israel formed similar caucuses in 35 parliaments around the world.

For “people who put an economic agenda first, we don’t have oil, [so they] won’t stand with us,” Reinstein said. “Only those who stand with us will be those who put belief ahead of politics, and that means we have to reach out to the Christian world.”

But these efforts haven’t been enough, contends Rabbi Yechiel Eckstein, of the International Fellowship of Christians and Jews. He said, “Israel has not made Christians into strategic allies, nor have Jewish organizations around the world found a way to harness and rally their support on political issues.

“The Christian allies caucus focusing on parliaments is minimal. And groups in Europe, like Christian Friends of Israel, are probably the most active and effective in Europe more than all. But the bottom line is it’s not sufficient, and it’s not generally politically or lobby driven and it’s not coordinated.”

Christians United for Israel (CUFI) condemned UNESCO’s resolution and issued an action alert Monday, one day a head of the vote, asking its members to email UNESCO’s leadership expressing opposition to their vote, according to a statement by CUFI spokesman Ari Morgenstern.

The alert generated some 20,000 emails, which in part, read, “Your actions will never erase the Jewish connection to Jerusalem. But your behavior does have consequences. By denying the Jewish connection to Jerusalem and the land of Israel, you will weaken all seeking peace and reconciliation with Israel. At the same time, you will strengthen and encourage those seeking to delegitimize and destroy Israel.”

Asked about Israel’s outreach efforts, a spokesman for Israel’s Foreign Ministry told JNS.org Jerusalem was “in contact with the Christian communities on UNESCO and will keep on working together until the dishonest and hypocritical resolution is no more.”

Among other efforts, the ministry posted a YouTube video in which a narrator reads aloud passages from the New Testament in which he substituted the Arabic names for the Temple Mount with the Jewish ones, highlighting the erasure of Jewish and Christian heritage at the site implied by the resolution’s use of Islamic terminology.

Not everyone agrees that mobilizing Christian allies is sufficient in overcoming entrenched diplomatic habits and national perceptions of self-interest in the U.N.

“I believe it was [former Israeli U.N. Ambassador and statesman Abba] Eban that said a resolution proposed by the Arab/Muslim bloc that the earth is flat is guaranteed to pass,” said Rabbi David Rosen, international director of Interreligious Affairs of the American Jewish Committee.

“This is the case at UNESCO as at the U.N. – the same structure and indeed, the UNESCO resolution was condemned by the Secretary Generals of both bodies,” Rosen said. “As this is political theatre and nothing more, Christian mobilization would have had little effect if any. The real hypocrites are China and Russia, who supported the resolution. Christians don’t count in [China], and only the Orthodox [count] in [Russia].”