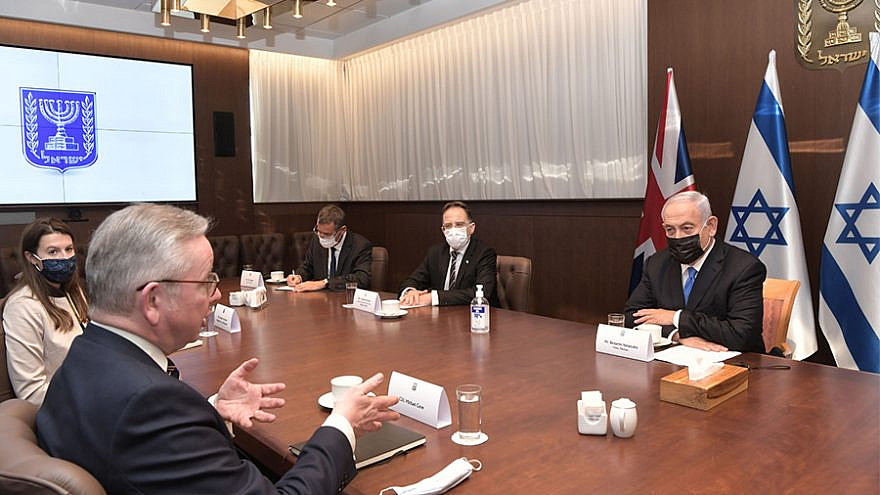 (April 21, 2021 / JNS) Israel and the United Kingdom are exploring the creation of a “green travel corridor” between the two countries, Israeli Prime Minister Benjamin Netanyahu’s office said in a statement.

During a meeting on Tuesday at the Prime Minister’s Office in Jerusalem, Netanyahu and visiting British Cabinet Minister Michael Gove discussed mutual recognition of their countries’ “green passports” for citizens fully vaccinated against COVID-19. No timeline has yet been unveiled for the plan.

Netanyahu and Gove also talked of increasing cooperation in the research, development and production of vaccines and in combating future viruses. Gove said that Britain is interested in learning from Israel’s experience in returning to a post-pandemic routine.

After a separate meeting on Tuesday with Gove, Foreign Minister Gabi Ashkenazi tweeted that the two had discussed “our strong bilateral ties, the need for a travel corridor,’ regional strategic issues and the Iranian threat.” He ended by stating: “The #Uk is a great ally of #Israel.”

The Israeli Ministry of Tourism said last week that Israel will begin receiving vaccinated tourists from abroad through a phased plan that will begin on May 23.

Tourism Minister Orit Farkash-Hacohen and Health Minister Yuli Edelstein have agreed on a framework for receiving tourists, after a ban lasting more than a year due to the global pandemic.