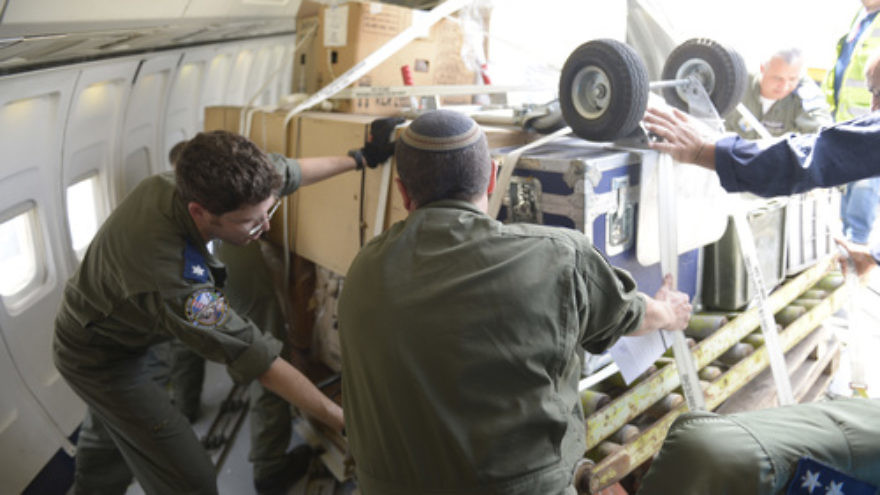 Click photo to download. Caption: On April 27, Israeli personnel load an aircraft with rescue equipment at Ben Gurion International Airport while the Israel Defense Forces aid delegation prepares to leave for its mission to Nepal in the aftermath of a deadly earthquake there. Credit: IDF Spokesperson.
Republish this article
1050 WORDS
Spread the word.
Help JNS grow!
Share now:

(April 29, 2015 / JNS) After a devastating earthquake measuring 7.9 on the Richter scale hit the impoverished mountainous country of Nepal over the weekend, killing more than 4,000 people, Israeli and Jewish humanitarian and governmental organizations have assumed their traditional role on the frontline of relief efforts for a natural disaster.

The 260-member Israeli government mission to Nepal includes an Israel Defense Forces (IDF) field hospital, a trained rescue team, and a security team, with the objectives of assisting the Nepalese people and evacuating Israeli citizens who are stranded in the country. Paul Hirschson, an Israeli Foreign Ministry spokesman, told JNS.org that the conditions on the ground in Nepal have been “very difficult.”

“The rescue mission is headed up by the Israeli ambassador to Nepal and the foreign ministry’s deputy director general, who has already arrived in Kathmandu (Nepal’s capital) from Jerusalem,” Hirschson said Monday.

“At present, this includes collecting information; providing shelter [for some 200 Israelis who are currently at the Jewish state’s Nepalese embassy]; securing contact with Israelis, as there remain some 100 who are unaccounted for; extracting Israelis still stranded in outlying areas, where there remain some tens of Israelis; preparing for the arrival of the aid mission; arranging for the flights to land; and securing locations for the field hospitals,” added Hirschson. As of Tuesday, the number of Israelis who were unaccounted for was down to 50.

“You are being sent on an important mission,” Israeli Prime Minister Benjamin Netanyahu said, addressing the Israeli relief team, headed by IDF Col. Yoram Laredo. “This is the true face of Israel—a country that offers aid over any distance at such moments.”

The Israeli government and MDA has also started evacuating surrogate-born babies and their parents to Israel. Nepal is a major destination for Israeli families seeking surrogate mothers for their children, since surrogacy is illegal in Israel for same-sex couples. But due to the earthquake, Israel has waived the legal and bureaucratic hurdles to their return. Hirschson told JNS.orgthat five babies have already been brought to Israel and that about 18 remain in Nepal, with efforts to bring them to Israel by Tuesday pending a medical assessment to determine if they can fly.

“If there are any who are assessed not to be able to fly, they will be looked after at the Israeli field hospital, which will be functional in the hours subsequent to the aid mission arriving later Monday or Tuesday,” Hirschson said.

MDA’s Martinez said there were six babies “that couldn’t be treated” in a hospital in Kathmandu who were evacuated on Sunday, and that there are eight more currently in the Israeli embassy, where they are being fed and cared for by MDA staff.

The American Jewish Joint Distribution Committee (JDC), which has provided relief to dozens of natural disaster zones over the last century and currently works in more than 70 countries, said it is partnering with the IDF field hospital in Kathmandu through providing equipment such as neonatal incubators. JDC said that while it provides immediate aid, it is also laying the foundation for our longer-term relief efforts in Nepal.

JDC’s director of communications, Michael Geller, told JNS.org that reports on the ground in Nepal present a “dire situation” that has been exacerbated by Nepal’s challenging weather, difficult terrain, and deep poverty.

“This is the worst earthquake of its kind in 80 years for Nepal, and it is happening in a country that has other challenges it was dealing with before the earthquake like poverty. So the combination of these factors can create a very harrowing situation on the ground,” said Geller.

JDC’s main goal during the emergency stage, Geller said, is to “ensure that aid is given to the people as quickly as possible.” The personnel at the IDF field hospital, he said, have “proven that they are effectively able to get into disaster zones quickly and treat people.”

In the longer-term, JDC’s mission the “restoration of livelihood,” which includes setting up schools, medical care, post-traumatic support, and disaster mitigation, according to Geller.

“We work with local communities, municipalities, and volunteer organizations in the countries where the disaster has happened to help them help themselves and ensure that when the next disaster happens, they can organize an effective response,” he said.

Geller praised the American Jewish community for “coming together to support the people of Nepal,” noting the outpouring of support and inquiries about JDC’s relief operations.

“I think that is one of the outstanding features of the Jewish community, its ability to come together and respond to crises and to show its dedication to tikkun olam (repairing the world),” he said.

The Jewish Federations of North America is raising funds for relief efforts in Nepal, as it has done in the past for natural and manmade disasters in locations such as the Philippines, Haiti, Japan, South Asia, and elsewhere. While humanitarian groups gear up to provide both short-term and long-term assistance, the Israeli government’s direct aid mission will last at least two to three weeks, according to the foreign ministry’s Hirschson. After that point, Israel will work on long-term relief with the international community.

“This is what we specialize in and are known for,” Hirschson told JNS.org.

“Beyond that [two-to-three week] time frame [for the initial aid mission] begins an entirely different phase of rehabilitation and reconstruction,” he said. “Israel will participate to the best of our abilities together with the international community. The foreign ministry has already had an initial internal discussion as to what contribution we will be able to make, and a team is working on that, but for now the focus is on saving lives.”

—With reporting by Alina Dain Sharon