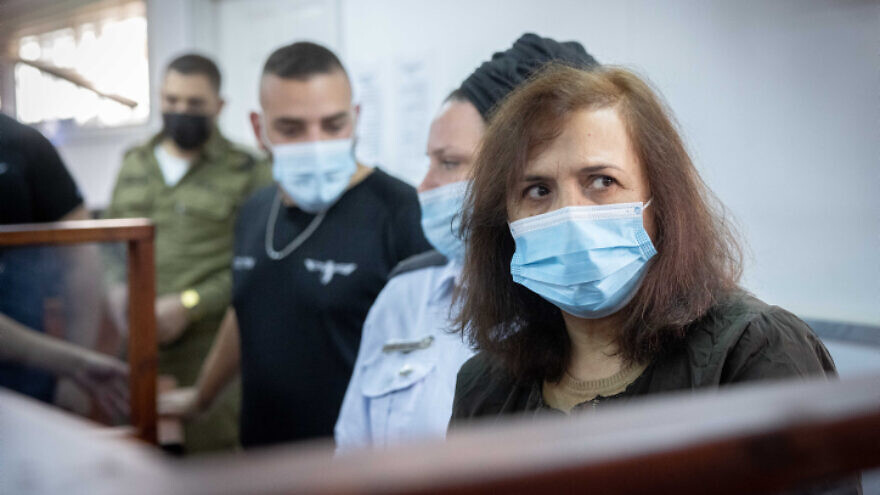 Juana Ruiz Rishwami, a Spanish citizen married to a Palestinian, during her court case at Ofer prison outside of Jerusalem, where she is being accused of funneling large sums of donations from European governments to a banned Palestinian militant group, Nov. 17, 2021. Photo by Yonatan Sindel/Flash90.
Republish this article
1067 WORDS
Spread the word.
Help JNS grow!
Share now:

(November 17, 2021 / JNS) A Spanish citizen who admitted to raising funds for a Palestinian NGO that were diverted to a terrorist organization agreed to a plea bargain on Nov. 10 in an Israeli military court. Observers say it could mark a watershed in Israel’s fight against a network of Palestinian “humanitarian” organizations that fundraise under false pretenses, which are then used to finance terror activities.

The defendant, Juana Ruiz Rishwami, imprisoned since April, admitted as part of the Nov. 10 plea bargain, which calls for a 13-month prison sentence (minus time served) and a NIS 50,000 ($16,250) fine, that she worked as a fundraiser for the Health Work Committees (HWC), an NGO which Israel’s Ministry of Defense designated a terrorist organization in January 2020.

Rishwami, 63, who is married to a Palestinian and lives in the West Bank, started working for HWC around 1993, according to court documents obtained by JNS. A fluent Spanish speaker, her main job was raising funds from Spanish organizations and the Spanish government, the documents said. (The majority of the donations to HWC come from Spain—30 percent of its total income between 2010 and 2019.)

Rishwami continued to work for the organization despite suspecting that it worked on behalf of the Palestinian Front for the Liberation of Palestine (PFLP), which has also been designated a terror group by the United States and European Union, according to the indictment brought against her in an Israeli military court.

In her plea bargain, Rishwami expressed remorse, saying, “All this time I thought I worked in a health organization. … I simply erred, and I want you to take into account that I never wanted to do any injustice to anyone.”

Maurice Hirsch, director of legal strategies for Palestinian Media Watch, told JNS that it stretches credulity that Rishwami didn’t know that the organization she worked for was connected to a Palestinian terror group, an excuse presented uncritically by media outlets like The Associated Press, which reported that “she appeared to have been largely unaware of her involvement in the alleged PFLP fund-raising scheme.”

“The first thing I looked at was her age. How old is this woman? And she’s not a young woman. Then there’s the fact that she started working at these organizations in 1993 and has been involved in their activities for a very long time,” said Hirsch.

“You couldn’t escape the fact that the people running this organization are PFLP members,” he said, noting the indictment mentions Walid Muhammad Hanatsheh, a well-known PFLP member, who ran HWC’s finances from 2001 to 2019.

He said the indictment offers a window into the bigger picture of how senior PFLP members, like Hanatsheh, utilize civilian NGOs as front groups to collect funds for terror activities.

Hirsch pointed out that the indictment noted Rishwami knew at the end of 2019 that Hanatsheh had financed the terror attack that killed 17-year-old Israeli Rina Shnerb yet continued to work at the organization.

‘It marked a shift’

Itai Reuveni, director of communications at NGO Monitor, told JNS that the Shnerb killing was the catalyst that spurred Israel’s government to take action against the Palestinian NGOs.

In 2016, NGO Monitor began researching the connection between Palestinian NGOs and the PFLP. “We found, based on public information, that many senior PFLP members were working in the NGO network,” he said. “We alerted the European donors. … Of course, we were ignored most of the time. What changed the game, unfortunately, was Rina Shnerb’s murder.”

Shnerb was killed by an explosion in Judea and Samaria in August 2019 while hiking with her father and brother, who were both severely injured in the attack. Israeli authorities arrested some 50 PFLP operatives as a consequence. “Eight names were published, and five were people NGO Monitor had warned about in connection with the NGO network,” said Reuveni.

“Some of the names published were connected to the same NGO where the Spanish woman used to work,” said Reuveni, noting that changed the issue from a public debate to a “real investigation.” It marked a shift, a new seriousness in Israel’s approach to tackling the danger posed by these NGO front groups.

“From the designation of the six NGOs to the arrest of the Spanish woman—these last six months are a big game-changer,” he said, referring to the Oct. 22 announcement by Israeli Defense Minister Benny Gantz designating six Palestinian NGOs as terrorist organizations.

Itamar Marcus, founder and director of Palestinian Media Watch, agreed, telling JNS: “This case should be a game-changer for European donors. Even though this one conviction doesn’t prove guilt in the other cases, it does prove that there is a process going on behind the scenes, that the PFLP is using NGOs to hide their fundraising.”

“It has to impact European funding even to the extent that they have to be more cautious, and have to take Israel’s warnings more seriously,” he said, stressing that Israel must keep pushing on the issue lest the international community grow skeptical.

European countries have been critical of the terror designation by Israel. The European Union said afterwards that it remained “proud of its continued support to civil society that contributes to peace efforts and confidence-building between Israelis and Palestinians.”

“The longer time goes by without additional charges, the more likely others will continue to challenge Israel. If bringing further charges proves to be impossible, Israel must supply enough information not just to the international community but also to the media so that they are convinced,” said Marcus.

Hirsch, while he credited Israel for its recent moves, agreed that it must engage in an ongoing campaign among European and U.S. audiences to explain the dangers of funding NGOs like HWC. He warned that Israel has not as yet done a satisfactory job explaining its position to the outside world.